Write answers in a paragraph

VII. Write answers in a paragraph

1. Describe the structure of the Earth.

Structure of the Earth's interior is 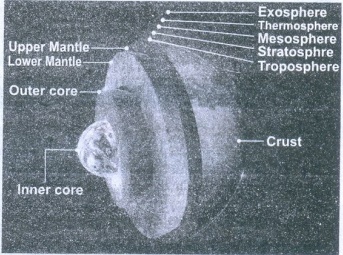 • Crust is the outer layer of the Earth. It is solid and rigid. The major elements are silica (Si) and aluminium (Al) and it is termed as SIAL.

• The crust is classified as continental crust and oceanic crust.

(The thickness is greater below the continents than the ocean floor)

• The interior port beneath the crust is mantle. The major elements are silica (Si) and Magnesium (Mg) and it is termed as SIMA.

• In the upper part the rock remains solid and in the lower part rocks are in molten form. (Molten rock 'Magma')

• The core is the inner most and hottest layer of the Earth. The major elements are Nickel (Ni) and Iron (Fe) and it is termed NIFE.

• The inner core is solid and the outer core is Liquid. It is responsible for Earth’s gravitational force and Earth's magnetic field.

2. Write a note on the internal and external processes of Earth.

• The forces that act from the Earth's interior towards the Earth's surface are called "Internal Processess". These forces build the landscape and create topographic relief.

• By the heat generated, the materials from deep below the Earth's crust are ejected.

• The movement of tectonic plates, Earthquake and volcanic eruptions are internal processes.

• The forces like running water, glacier, wind, waves are agents for External process.

• These agents tear the landscape down into relatively low elevated plains.

3. How are volcanoes classified based on the periodicity of their eruptions?

• Hot solid, liquid and gaseous materials from the Earths interior erupt out to the surface through a vent or an opening on the crust.

• Based on the periodicity of eruptions volcanoes are classified into

• The Volcanoes that do not show any sign of volcanic activity for a long period of time are called 'Dormant' volcanoes. (Sudden explosion; May cause loss to life and property.)

4. Explain the effects of Volcanoes :

• Many Dormant and Active volcanoes are the most attractive tourist spots of the world.

• The large amount of dust and ash makes breathing hard and irritable.

• They can alter the weather conditions and disrupt transport in and around the volcanic region.