2. A ball of mass 1 kg and another of mass 2 kg are dropped from a tall building whose height is 80 m. After, a fall of 40 m each towards Earth, their respective kinetic energies will be in the ratio of

4. An engine pumps water continuously through a hose. Water leaves the hose with a velocity v and m is the mass per unit length of the water of the jet. What is the rate at which kinetic energy is imparted to water ?.

5. A body of mass 4 m is lying in xy-plane at rest. It suddenly explodes into three pieces. Two pieces each of mass m move perpendicular to each other with equal speed v. The total kinetic energy generated due to explosion is

6. The potential energy of a system increases, if work is done

(a) by the system against a conservative force

(b) by the system against a non-conservative force

(c) upon the system by a conservative force

(d) upon the system by a non-conservative force

7. What is the minimum velocity with which a body of mass m must enter a vertical loop of radius R so that it can complete the loop?.

8. The work done by the conservative force for a closed path is

13. A particle is placed at the origin and a force F=kx  is acting on it (where k is a positive constant). If U(0)=0, the graph of U(x­) versus x will be (where U is the potential energy function) 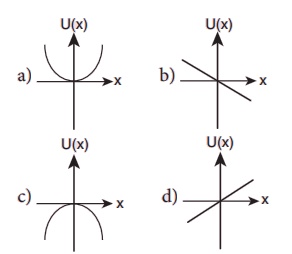 14. A particle which is constrained to move along x-axis, is subjected to a force in the same direction which varies with the distance x of the particle from the origin as F(x) =-kx+ax3.

Here, k and a are positive constants. For x ≥ 0, the functional form of the potential energy U(x) of the particle is 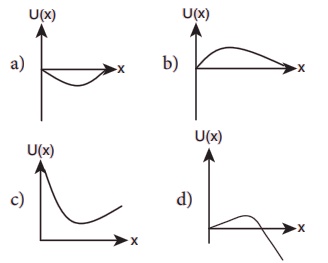 15. A spring of force constant k is cut into two pieces such that one piece is double the length of the other. Then, the long piece will have a force constant of