1. Which chemical is responsible for the antiseptic properties of dettol.

Chloroxylenol and α-terpineol is responsible for the antiseptic properties of Dettol.

The medicines have the ability to kill the pathogenic bacteria are antibiotics.

3. Name one substance which can act as both analgesic and antiphyretic

Acetyl salicylicacid (Aspirin) can act as both analgesic and antipyretic

4. Write a note on synthetic detergents

• There are three types of detergents

• They can be used in hard water and in acidic conditions

• The cleansing action is similar to soaps

5. How do antiseptics differ from disinfectants?

• Both are stop or slow down the growth of microorganisms.

• Antiseptics are applied to living tissue whereas disinfectants are used to inanimated objects.

6. What are food preservatives?

Preservatives are capable of inhibiting, retarding or arresting the process of fermentation, acidification or other decomposition of food by growth of microorganisms.

7. Why do soaps not work in hard water?

These insoluble soaps separate as scum and are useless as cleansing agent.

8. What are drugs? How are they classified

• A drug is a substance that is used to modify or explore physiological systems or pathological states for the benefit of the recipient.

• It is used for the purpose of diagnosis, prevention, cure/relief of a disease.

I. Classification based on the chemical structure:

II. Classification based on Pharmacological effect:

Based on their biological effect that they produce on the recipient. Example: Antibiotics, antihypertensive drugs

III. Classification based on the target system (drug action):

Based on the biological system / process, that they target in the recipient.

Example: streptomycin and erythromycin. Streptomycin inhibits the initiation of protein synthesis, while erythromycin prevents the incorporation of new amino acids to the protein.

IV. Classification based on the site of action (molecular target):

It is classified based on the drug target with which it binds. This classification is highly specific compared to the others.

9. How the tranquilizers work in body.

Tranquilizers acts on the central nervous system by blocking the neurotransmitter dopamine in the brain.

10. Write the structural formula of aspirin. 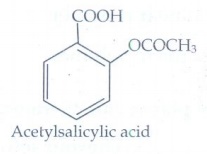 11. Explain the mechanism of cleansing action of soaps and detergents

• The hydrophilic carboxylate group is soluble in water.

• The dirt in the cloth is due to the presence of dust particles intact or grease which stick.

• When the soap is added to an oily or greasy part of the cloth, the hydrocarbon part of the soap dissolve in the grease, leaving the negatively charged carboxylate end exposed on the grease surface.

• At the same time the negatively charged carboxylate groups are strongly attracted by water, thus leading to the formation of small droplets called micelles and grease is floated away from the solid object.

• When the water is rinsed away, the grease goes with it and the cloth gets free from dirt.

• The cleansing ability of a soap depends upon its tendency to act as a emulsifying agent between water and water insoluble greases.

12. Which sweetening agent are used to prepare sweets for a diabetic patient?

Artificial sweetening agents used to prepare sweets for a diabetic patient because synthetic compounds which imprint a sweet sensation and possess no or negligible nutritional value.

13. What are narcotic and non – narcotic drugs. Give examples

They relive pain and produce sleep.

14. What are anti fertility drugs? Give examples.

A polymer containing two or more different kinds of monomer units is called a copolymer.

16. What are bio degradable polymers? Give examples.

The polymer materials that are readily decomposed by microorganisms in the environment are called biodegradable polymers.

17. How is terylene prepared?

The monomers are ethylene glycol and terephthalic acid (or) dimethylterephthalate are mixed and heated at 500 K in the presence of zinc acetate and antimony trioxide catalyst, terylene formed. 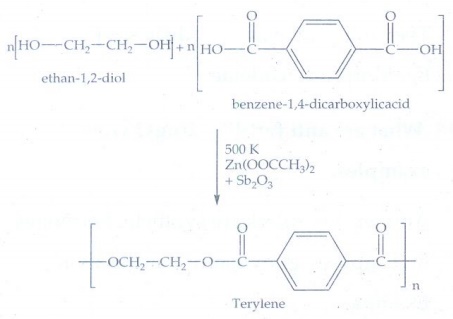 18. Write a note on vulcanization of rubber

• Natural rubber is mixed with 3-5% sulphur and heated at 100−150°C causes cross linking of the cis-l,4-polyisoprene chains through disulphide (-S-S-) bonds and made the polymer strong and elastic.

• The physical properties of rubber can be altered by controlling the amount of sulphur.

• Rubber made with about 1 to 3% sulphur is soft and stretchy.

• Rubber with 3 to 10% sulphur is harder but flexible.

19. Classify the following as linear, branched or cross linked polymers

a) Bakelite b) Nylon c) polythene

• They become soft on heating and hard on cooling

• They can be remolded

• They can not be remolded