1. What type of linkages hold together monomers of DNA?

a) Hydrogen bonding between complementary base pairs

2. Give the differences between primary and secondary structure of proteins.

2. Only peptide bond between amino acids .

2. In addition to the peptide bond, hydrogen bonding also observed.

3. Name the Vitamins whose deficiency cause i) rickets ii) scurvy

5. Give any three difference between DNA and RNA 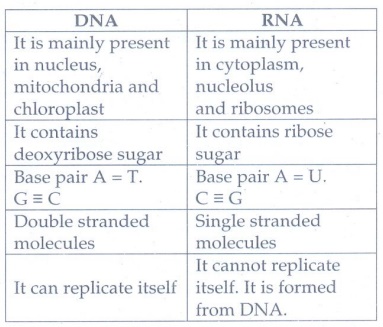 • It is mainly present in nucleus, mitochondria and chloroplast

• It can replicate itself

• It is mainly present in cytoplasm, nucleolus and ribosomes

• It cannot replicate itself. It is formed from DNA.

7. Give two difference between Hormones and vitamins 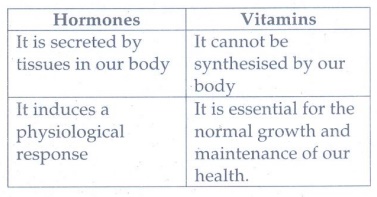 • It is secreted by tissues in our body

• It induces a physiological response

• It cannot be synthesised by our body

• It is essential for the normal growth and maintenance of our health.

8. Write a note on denaturation of proteins

The process of a protein-losing its higher order structure without losing the primary structure, it is called denaturation. When a protein denatures, its biological function is also lost.

Each protein has a unique three- dimensional structure formed by interactions such as disulphide bond, hydrogen bond, hydrophobic and electrostatic interactions.

These interactions can be disturbed when the protein is exposed to a higher temperature, certain chemicals such as urea, alteration of pH, ionic strength etc.,

9. What are reducing and non – reducing sugars?

If the carbonyl group in the sugars are not involved in the glycosidic linkage then they retain their reducing property such sugars are called non-reducing sugars.

If the carbonyl group in the sugars are involved in the glycosidic linkage then they are not available for reduction such sugars are called reducing sugars.

10. Why carbohydrates are generally optically active.

Carbohydrates are having chiral centres. Hence they are optically active

12. How are vitamins classified

13. What are harmones? Give examples

Hormone is an organic substance (e.g. a peptide or a steroid) that is secreted by one tissue into the blood stream and induces a physiological response in other tissues. It is an intercellular signalling molecule.

14. Write the structure of all possible dipeptides which can be obtained form glycine and alanine

The possible dipeptides obtained from glycine and alanine 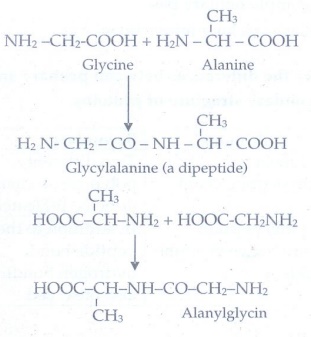 The biochemical reactions that occur in our living cells are catalysed by special proteins called enzymes. They are highly specific in nature. 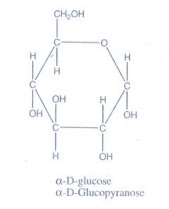 17. What are different types of RNA which are found in cell ?

• They are stabilised by the hydrogen bond between the carbonyl oxygen of one amino acid (nth residue) with amino hydrogen of the fifth residue (n+4th residue).

• The side chains of the residues project outside of the helix.

• The amino acid proline produces a bend in the helical structure and often called as a helix breaker due to its rigid cyclic structure.

19. What are the functions of lipids in living organism.

1. Lipids are the integral component of cell membrane.

2. Triglycerides is an energy reserve.

3. They act as protective coating in aquatic organisms.

4. Lipids of connective tissue give protection to internal organs.

5. Lipids help in the absorption and transport, of fat soluble vitamins.

6. They are essential for activation of enzymes such as lipases.