1. Genes for cytoplasmic male sterility in plants are generally located in

2. In which mode of inheritance do you expect more maternal influence among the off spring

3. Which one of the following cannot be explained on the basis of Mendel’s Law of Dominance?

a) Factors occur in pairs

4. F2 generation in a Mendelian cross shows that both genotypic and phenotypic ratios are same as 1:2:1. It represents a case of

a) Monohybrid crosses with incomplete dominance

a) Controls multiple traits in an individual

b) Is expressed only in primitive plants

c) Is a gene evolved during Pliocene

d) Controls a trait only in combination with another L gene

6. A true breeding plant is

a) Near homozygous and produces offspring of its own kind

b) Always homozygous recessive in its genetic construction

c) One that is able to breed on its own

d) Produced due to cross pollination among unrelated plants

7. Mendel obtained wrinkled seeds in pea due to the deposition of sugars instead of starch. It was due to which enzyme?

8. Ratio of complementary gene is

9. If there are 999 bases in an RNA that codes for a protein with 333 amino acid and the base at position 901 is deleted such that the length of the RNA becomes 998 bases, how many codons will be altered?

11. The ratio in a dihyrbid test cross between two individuals is given by

b) Heterozygosity and linkage

d) Homozygosity and self assortment

13. How many different types of gametes can be formed by F1 progeny, resulting from the following cross AABBCC x aabbcc

14. Which of the following conditions represents a case of co-dominant genes?

a) A gene expresses itself, suppressing the phenotypic effect of its alleles

b) Genes that are similar in phenotypic effect when present separately, but when together interact to produce a different trait

d) Alleles, each of which produces an independent effect in a heterozygous condition.

15. If ‘A’ represents the dominant gene and ‘a’ represents its recessive allele, which of the following would be most likely result in the first generation off spring when Aa is crossed with aa?

a) All will exhibit dominant phenotype

b) All will exhibit recessive phenotype

c) Dominant and recessive phenotypes will be 50% each

d) Dominant phenotype will be 75%

16. In Pisum Sativum, there are 14 chromosomes. How many types of homologous pairs can be prepared?

17. The year 1900 AD is highly significant for geneticists due to

a) Discovery of genes

b) Principle of linkage

18. The phenotypic ratio of trihybrid cross in F2 generation is

19. In a mutational event when adenine is replaced by guanine, it is the case of

20. Mutations can be induced with

21. The mechanism that causes a gene to move from one linkage group to another is called

22. A point mutation comprising the substitution of a purine by pyrimidine is called

a) Base is substituted

b) base is deleted or added

24. The distance between two genes in a chromosome is measured in cross-over units which represent

a) Ratio of crossing over between them

b) Percentage of crossing over between them

c) Number of crossing over between them

25. When a cluster of genes show linkage behaviour they

a) do not show a chromosome map

b) show recombination during meiosis

c) do not show independent assortment

26. Genetic map is one that

a) Establish sites of the genes on a chromosome

b) Establishes the various stages in gene evolution

c) Shows the stages during the cell division

d) Shows the distribution of various species in a region

27. After a mutation at a genetic locus of the character of an organism changes due to the change in

28. In a hexaploidy wheat, the haploid (n) and basic (x) numbers of chromosomes are

c) Change in single base pair

30. Which one of the following is a wrong statement regarding mutations?

a) UV and Gamma rays are mutagens

c) Deletion and insertion of base pairs cause frame shift mutations.

31. Which of the following statement is not true of two genes that show 50% recombination frequency?

a) The genes may be on different chromosomes

b) The genes are tightly linked

d) If the genes are present on the same chromosome, they undergo more than one crossover in every meiosis.

32. Haploids are more suitable for mutation studies than the diploids. This is because

a) All mutations, whether dominant or recessive are expressed in haploids

b) Haploids are reproductively more stable than diploids

d) Haploids are more abundant in nature than diploids

33. Crossing over that results in genetic recombination in higher organisms occurs between

a) Non-sister chromatids of a bivalent

34. Removal of introns and joining the exons in a defined order in a transcription unit is called

36. Peptide synthesis inside a cell takes place in

37. During protein synthesis in a organism at one point the process comes to a halt. Select the group of the three codons from the following from which any one of the three could bring about this halt.

38. The binding site of tRNA with mRNA and amino acids respectively are

a) mRNA with DHU loop and amino acid with CCA end

b) mRNA with CCA end and amino acid with anticodon loop

39. Which of the following is correct regarding genetic code?

a) UUU is the initiation codon which also codes for phenylalanine

b) There are 64 triplet codons and only 20 amino acids

d) UAA is the nonsense codon which also codes for methionine

40. Which of the following set of options is used in translation?

41. Sequence of DNA (non-coding) is known as

42. During transcription holoenzyme RNA polymerase binds to a DNA sequence and the DNA assumes a saddle like structure at that point. What is that sequence called

43. The successive nucleotides of RNA are covalently linked through

45. Taylor conducted the experiment to prove semiconservative mode of chromosome replication on

46. The new strand synthesized in small pieces and then joined together during DNA replication is called

d) All of these

47. What is incorrect about the following figure representing DNA replication 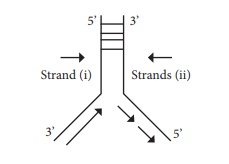 a) The direction of DNA replication in strand (i)

b) The direction of DNA replication in strand (ii)

c) Discontinuous replication of strand (i)

49. The complete set of chromosome inherited as a single unit from one parent is known as

50. The mobile genetic element is