I.  Choose the best answer.

1. Which is not the western margin of Asia?

2. The Intermontane ______ plateau is found between Elbruz and Zagros.

(i) Uniform throughout the year.

(iii) The average temperature is 10°C.

(iv) Of the statements give above,

(a) i alone is correct

(b) ii and iii are correct

(c) i and iii are correct

(d) i and ii are correct

Answer: (a) i alone is correct

Answer: (b) The Pyrenees

7. The western and north-western Europe enjoys mild and humid climate.

(a) These regions are found near the equator

(b) It is influenced by the North Atlantic Drift

(c) It is surrounded by mountains

(d) All of the above

Answer: (b) It is influenced by the North Atlantic Drift

8. Which of the following statements is incorrect?

(b) All the rivers of Europe originate in the Alps

(d) The rivers of Europe are perennial in nature

Answer: (d) The rivers of Europe are perennial in nature

a. The Meseta - Spain

b. The Jura - France

10. Which country in Europe has a very low density of population?

1. The Taurus and the Pontine ranges radiate from the Armenian knot.

2. The wettest place in the world is Mawsynram.

3. Iran is the largest producer of Mineral resources in the world.

5. The national dance of Philippines is Tinikling.

6. The second highest peak in Europe is Mont Blanc.

7. The type of climate that prevails in the central and eastern parts of Europe is Continental type.

8. The important fishing ground in North Sea is Dogger Bank.

10. The river Danube passes through nine countries of Europe.

1. Assertion (A): Italy has dry summers and rainy winters

Reason (R): It is located in the Mediterranean region 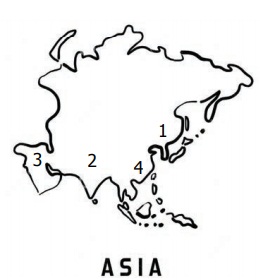 Match the plains with the notation on the map and select the correct answer using the codes given below.

3. In the given outline map of Asia, the shaded areas indicate the cultivation of 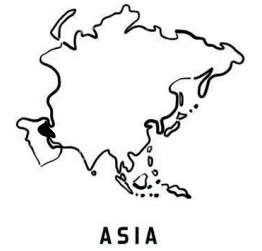 The plateau of Anatolia (Pontine to Taurus)

The plateau of Iran (Elburz to Zagros mt)

The plateau of Tibet (Kunlun to Himalayas)

Summer is hot and humid while winter is cool and dry.

3. How does physiography play a vital role in determining the population of Asia?

The population is unevenly distributed because of various physical features. River plains and industrial regions have high density of population, whereas low density is found in the interior parts of Asia.

4. Name the ports found is Asia.

5. Asia is called the ‘Land of Contrasts’-Justify.

Asia is the biggest continent. It has different types of land features such as mountain, plateau, plain, valley, bay, island etc. It also has different climatic conditions from the equator to polar region. Apart from this, many races, languages, religions and cultures are followed by people who live in Asia. So, Asia is called 'the land of contrasts'.

6. Name the important mountains found in the Alpine system.

The Sierra Nevada, the Pyrenees, the Alps, the Apennines, the Dinaric Alps, the Caucasus and the Carpathian.

7. What are the important rivers of Europe?

8. Name a few countries which enjoy the Mediterranean type of climate.

9. Give a short note on the population of Europe.

Europe is the third most populous continent, after Asia and Africa. The population of Europe was 742 million in 2018, which accounted for 9.73% of the world's population. The population density in Europe is 34 persons/km2.

The important plateaus are

• The plateau of Anatolia

• The plateau of Iran

• The plateau of Tibet

• The Southern Plateaus are relatively lower than northern plateaus

The important plateaus are

• Hot climate is found throughout the year.

The Arctic and Northern Scandinavian highland have Tundra type of vegetation made up of lichens and mosses.

Tiga vegetations are found to the South of Tundra region in Norway, Sweden, Finland, Germany, Poland and Austria. Pine, fir spruce and larch are found in Taiga forest

4. The North western highlands and the Alpine mountain range.

1. This region includes the mountain and plateau of Norway, Sweden, Finland, Scotland and Iceland, southern part of Europe.

2. This region has the most beautiful fjord coast.

3. It has a lot of lakes which serve as reservoir for producing electricity.

1. The Alpine mountain system consists of a chain of young fold mountains found in the southern part of Europe.

2. The highest peak in Europe is located here.

3. There are several active volcanoes found in the Alpine mountain system.

1. Asia is the leading producer of rice.

Monsoon in Asia is suitable for rice cultivation because of the abundant rainfall, fertile plains and availability of labour.

2. Asia is the largest and most populous continent in the world.

Asia is the most populated continent in the world. Approximately six- tenth of the world's population lives in Asia.

Asia covers 30% of the world's land area. As it lies in northern hemisphere it has varied physical features. The mountains and perennial rivers are conducive to human existence. So it is the largest and most populous continent in the world.

3. Europe is called ‘a giant peninsula’.

Europe is surrounded by the Arctic Ocean in the North, the Black Sea and Mediterranean Sea in the south, the Atlantic Ocean in the west and the Ural mountains in the east. So it looks like a giant peninsula.

4. Although Western Europe is located in the high latitudes, it has a moderate climate.

North Atlantic Drift is a warm ocean current which brings warmth to the western Europe. The westerly wind further transports warmth across Europe. So Western Europe has a moderate climate.

1. Give an account of the drainage system in Asia.

The rivers of Asia originate mostly from the central highlands. The Ob, Yenise and Lena are the major rivers that flow towards the north and drain into the Arctic Ocean. These rivers remain frozen during winter. On the other hand, South Asia has many perennial rivers (e.g.) Brahmaputra, Indus, Ganga and Irrawaddy which originate from the snow covered high mountains that do not freeze during winter. The Euphrates and Tigris flow in West Asia. The Amur, Huang He, Yangtze and Mekong rivers flow in the south and south eastern parts of Asia. Yangtze is the longest river in Asia.

Asia has a variety of mineral deposits. It holds an important place in the production of Iron, Coal, Manganese, Bauxite, Zinc, Tungsten, Petroleum, Tin etc. Oil and Natural Gas is found in the west Asian countries. One third of the world’s oil is produced in Asia. Among the west Asian countries, Iran has a considerable wealth of mineral resources. The important minerals found in Asia are:

Iron Ore : Asia has the largest deposits of iron ore in the world. China and India are the important iron ore deposit countries of Asia. Turkey, Philippines, Malaysia, Thailand, Myanmar etc., are a few other countries that have iron ore deposits.

3. What are fjords? How do they protect harbours from bad weather conditions?

Fjord: A fjord is a narrow and deep sea inlet between steep cliffs. It helps in the following ways.

1. It reduces the speed of wind, irrespective of its direction.

2. The force of sea waves are also controlled.

Hence, areas with fjords are best suited for natural harbours.

4. Describe the climatic divisions of Europe.

The climate of Europe varies from the subtropical to the polar climate. The Mediterranean climate of the south has warm summer and rainy winter. The western and northwestern parts have a mild, generally humid climate, influenced by the North Atlantic Drift. In central and eastern Europe, the climate is humid continental-type. In the northeast, subarctic and tundra climates are found. The whole of Europe is subject to the moderating influence of prevailing westerly winds from the Atlantic Ocean.

North Atlantic Drift is a warm ocean current which brings warmth to the western Europe. The westerly wind further transports warmth across Europe.

Mark the following in the outline map of Asia and Europe. 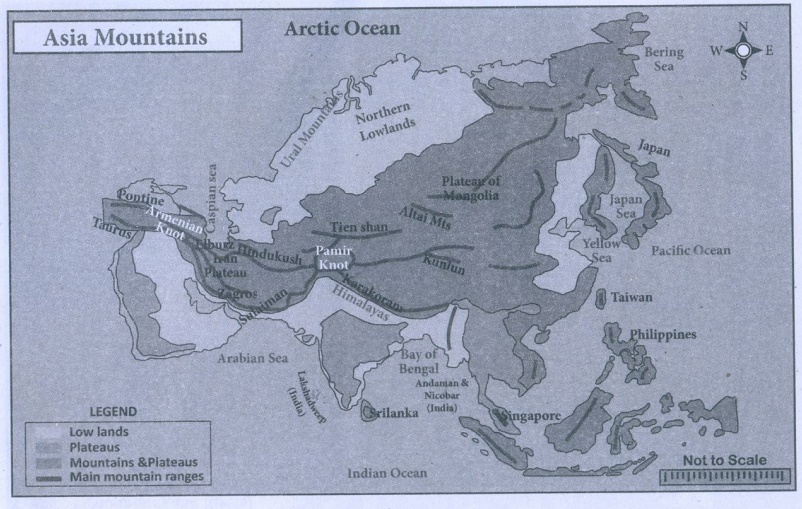 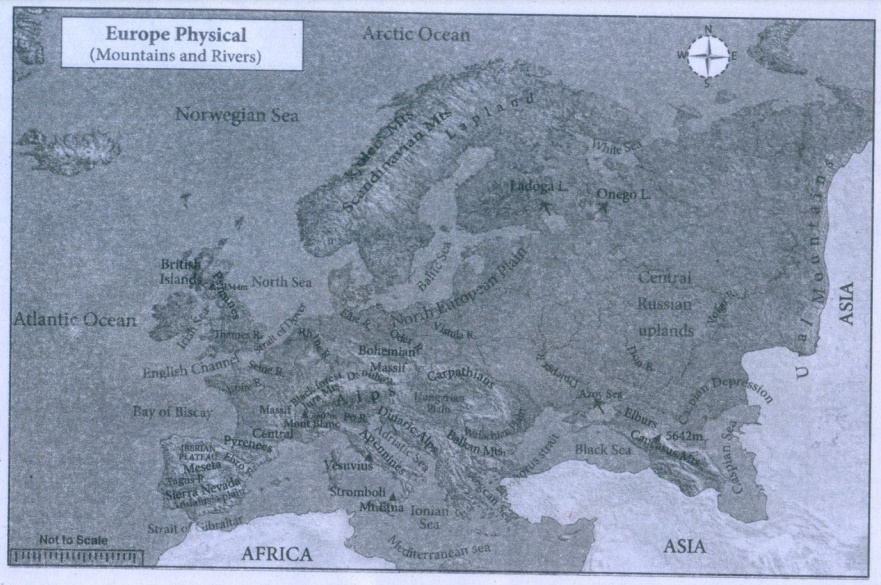 2. If you get a chance to settle in Europe, which country would you choose? List out the reasons why?

3. Choose any region is Asia. In the map of Asia, mark its distribution of natural vegetation and wildlife.Paste related pictures.