1. Who among the following built the VaikundaPerumal temple?

2. Which of the following titles were the titles of Mahendra Varma I?

3. Which of the following inscriptions describes the victories of Pulakesin II?

II Read the statement and tick the appropriate answer

Statement II: Kailasanatha temple at Kanchipuram is an example of Pallava art and architecture.

a. Statement I is wrong.

b. Statement II is wrong.

c. Both the statements are correct

d. Both the statements are wrong.

Answer: c. Both the statements are correct

Statement I: Tamil literature flourished under Pallava rule, with the rise in popularity of Thevaram composed by Appar.

d. Neither I nor II

Answer: b. II only

1. It was founded by Dantidurga.

3. Krishna I built the Kailasanatha temple at Ellora.

4. Which of the following is not a correct pair?

5. Find out the wrong pair.

III Fill in the blanks

1. Pulakesin II defeated Harsha Vardhana on the banks of the river Narmada.

3. Ravikirti was the author of Aihole Inscription.

5. The music inscriptions in Kudumianmalai and Thirumayam show Pallavas’ interest in music.

2. The greatest king of the Rashtrakuta dynasty was Pulakesin II. (False)

3. Mamallapuram is one of the UNESCO World Heritage Sites. (True)

4. Thevaram was composed by Azhwars. (False)

5. The Virupaksha temple was built on the model of Kanchi Kailasanatha Temple. (True)

VI Answer in one or two sentences

The three gems of Kannada literature were Pampa, Sri Ponna and Ranna.

2. How can we classify the Pallava architecture?

Pallava architecture can be classified as

3. What do you know of Gatika?

Gatika (monastery or centre of learning) at Kanchi was popular during the Pallava times and it attracted students from all parts of India and abroad.Vatsyaya who wrote Nyaya Bhashya was a teacher at Kanchi (Gatika).

The five rathas (chariots), popularly called Panchapandavar rathas, signify five different style of temple architecture. Each ratha has been carved out of a single rock. So they are called monolithic.

5. Make a note on Battle of Takkolam.

Krishna III (c. 939-967) was the last able ruler of Rashtrakuta dynasty. He defeated the Cholas in the battle of Takkolam (presently in Vellore District) and captured Thanjavur.

Pallava period is known for architectural splendour. The Shore Temple and various other temples carved from granite monoliths and the Varaha cave (7th century) at Mamallapuram, are illustrious examples of Pallava architecture. In 1984, Mamallapuram was added to the list of UNESCO World Heritage Sites.

Pallava architecture can be classified as

2. Write a note on Elephanta island and Kailasanatha temple at Ellora.

Ellora: Kailasanatha Temple was one of the 30 temples carved out of the hill at Ellora. It was built during the reign of Krishna I. The temple is known for its architectural grandeur and sculptural splendour. The temple covers an area of over 60,000 sq. feet and vimanam (temple tower) rises to a height of 90 feet. This temple has resemblance to the shore temple at Mamallapuram. The Kailasanatha temple portrays typical Dravidian features.

Elephanta : Originally known as Sripuri and called Gharapuri by the local people, Elephanta is an island near Mumbai. The Portuguese named it as Elephanta, after seeing the huge image of an elephant. The Trimurthi (three-faced) Siva icon is an illustrative of the sculptural beauty portrayed in the Cave Temple of Elephanta. There are impressive images of dwarapalakas (entrance guards) at the entrance of the Temple.

They were the descendants of Badami Chalukyas who ruled from Kalyani (modern-day Basavakalyan). In 973, Tailapa II, a feudatory of the Rashtrakuta ruling from Bijapur region defeated Parmara of Malwa. Tailapa II occupied Kalyani and his dynasty quickly grew into an empire under Somesvara I. Somesvara I moved the capital from Manyakheta to Kalyani.

1. Collect temple architecture pictures of Pallavas, Chalukyas and Rashtrakutas and identify the distinguishing features of each period.

Plan a trip to any place of historical importance.

a. Sketch the biography of Mahendravarma I and Pulakesin II.

b. See the picture and write a few sentences on it. 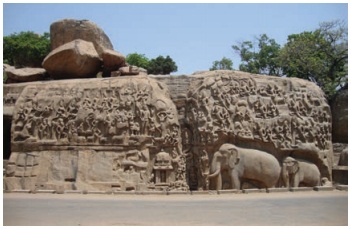 Give examples for the structural temples of Pallava period.

Who built the Kailasanatha temple at Ellora?

Name the new style of architecture developed during Chalukya period.

Name the sculptural mandapas of Mamallan style of architecture.

Who was the founder of Rashtrakuta dynasty?

What does Aihole inscription mention?

Where do structural temples of Chalukya exist?

What were the titles adopted by Narasimhavarma I?