2. Which dynasty was not in power during the Sangam Age?

5. What was the occupation of the inhabitants of the Kurinji region?

II. Read the Statement and tick the appropriate answer

1. Assertion (A) : The assembly of the poets was known as Sangam.

Reason (R): Tamil was the language of Sangam literature.

a. Both A and R are true. R is the correct explanation of A.

b. Both A and R are true. R is not the correct explanation of A.

Answer: b) Both A and R are true. R is not the correct explanation of A.

2. Which of the following statements are not true?

b. The Pathitrupathu provides information about Chera Kings.

c. The earliest literature of the Sangam age was written mostly in the form of prose.

3. The ascending order of the administrative division in the ancient Tamizhagam was

4. Match the following dynasties with the Royal Insignia

III. Fill in the blanks

1. The battle of Venni was won by Karikalan.

2. The earliest Tamil grammar work of the Sangam period was Tholkappiyam.

4. The chief of the army was known as Thanaithalaivan.

1. The singing bards of the Sangam age were called Irular. (False)

3. Kizhar was the village chief. (True)

4. Puhar was the general term for city. (False)

VI. Answer in one or two sentences

1. Name any two literary sources to reconstruct the history of ancient Tamizhagam.

The ancient Tamils had a great respect for the heroes who died in the battlefield. The hero stones were erected to commemorate heroes who sacrificed their lives in war.

1. Discuss the status of women in the Sangam Society.

There was no restriction for women in social life. There were learned and wise women. Forty women poets had lived and left behind their valuable works. Marriage was a matter of self-choice. However, chastity (karpu) was considered the highest virtue of women. Sons and daughters had equal shares in their parents' property.

1. KarikalValavan is regarded as the greatest Chola king. Justify.

Karikal Valavan or Karikalan was the most famous of the Chola kings. He defeated the combined army of the Cheras, Pandyas and the eleven Velir chieftains who supported them at Venni, a small village in the Thanjavur region. He converted forests into cultivable lands. He built Kallanai (meaning a dam made of stone) across the river Kaveri to develop agriculture. The Pattinapaalai, a poetic work in the Pathinen- keezhkanakku, gives elaborate information of the trading activity during the rule of Karikalan.

2. The period of Kalabhra is not a dark age. Give reasons.

The Kalabhras had occupied the Tamil country for about two and half centuries. We have very little information about Kalabhras. They left neither artefacts nor monuments. But there is evidence of their rule in literary texts. The literary sources of this period include Tamil Navalar Charithai, Yaperunkalam and Periapuranam. Seevaka Chinthamani and Kundalakesi were also written during this period. In Tamizhagam, Jainism and Buddhism became prominent during this period. Introduction of Sanskrit and Prakrit languages had resulted in the development of a new script called Vattezhuththu. Many works under Pathinen Keezhkanakku were composed. Trade and commerce continued to flourish during this period. So the Kalabhra period is not a dark age, as it is portrayed.

1. Mark and colour the extent of Chera, Chola and Pandya empires on the river map of South India. 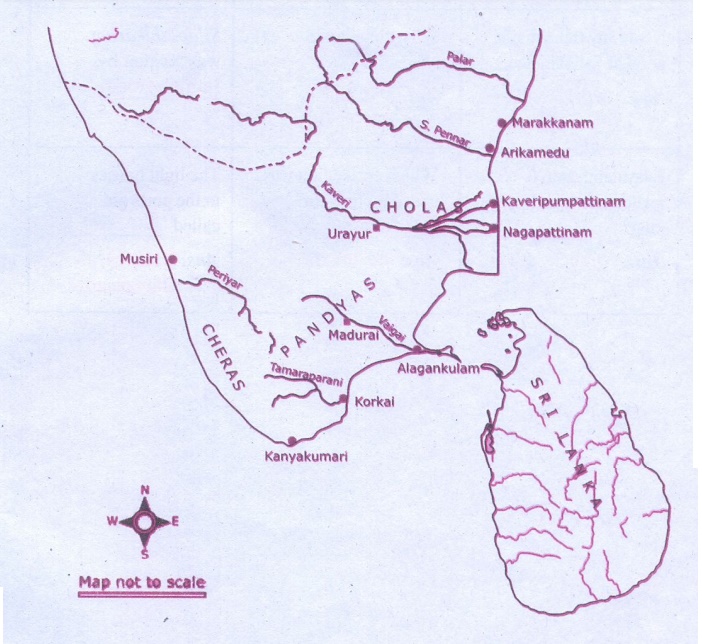 Collect and paste the pictures of landscape and find out the eco-region to which it belongs. Write the important crops grown and occupation of the people there.

Name the two groups of officials who assisted the king.

Name any two women poets of the Sangam period.

Talayalanganam is related to which Pandya king?

Which eco-region was called menpulam?