A. Fill in the blanks.

1. The Universe was formed after Big bang explosion.

2. Light year is the unit used to measure the distance between two celestial bodies.

3. The Sun is the centre of the solar system.

5. Juniter planet has many natural satellites.

6. India’s first ever mission to the moon is Chandrayan-1.

8. The Equator faces the Sun directly  on 21 march and 23 September.

9. At the time of Perihelion, the Earth is closest to the Sun.

10. The line which divides day and night on the Earth’s surface is Terminator line.

B. Choose the best answer.

1. The movement of the Earth on its axis is called

2. The Tropic of Capricorn faces the Sun directly on

3. The galaxy in which our solar system is found is

4. The only celestial body where man has successfully landed

5. Which of the following planets can float on water?

C. Circle the odd one out

E. i) Consider the following statements.

1. Venus rotates from east to west.

3. Mars has rings around it.

Choose the correct answer using the codes given below.

Statement I: Earth is called a watery planet.

Statement II: The rotation of the Earth causes seasons.

Which of the statement(s) is/are true?

c. Both the statements are true

d. Statements I and II are wrong.

2. The nearest galaxy to the solar system.

G. Answer in a sentence or two.

2. Pluto is no longer a planet. Reason out.

• It is in orbit around the Sun.

• It has “cleared the neighbourhood” around its orbit.

Perihelion is the Earth’s closest position to the sun.

4. How many times in a year would you find the Sun overhead if you lived on 20°N Latitude?

5. Which celestial body shares its orbit with others? Give an example.

Pluto which is constrained in its orbit by the gravity of Neptune and shares its orbital neighbourhood with Kuiper belt.

1. Why is Uranus called as the somersaulting planet?

It rotates on its axis from east to west like Venus. Its axis is tilted so much that, it appears to orbit the Sun on its sides like a rolling ball.

2. The surface of the moon has many craters.

The surface of the moon is characterized by craters created by the impact of meteors.

3. The velocity of Earth’s rotation is zero at poles.

I. Answer in detail.

1. Distinguish between inner and outer planets.

• The four planets nearer to the Sun are called Inner or Terrestrial Planets.

• The surface of inner planets has mountains, volcanoes and craters.

• The inner planets are comparatively smaller in size and are composed of rocks.

• They are also called Gaseous Giants.

• An asteroid belt is found between Mars and Jupiter.

2. What are the effects of rotation and revolution?

• It is the spinning movement of the Earth on its axis.

• The Earth rotates from west to east (anti-clockwise) and takes 23 hours 56 minutes and 4.09 seconds to complete one rotation.

• The time taken by the Earth to complete one rotation is called a day.

• The rotation of the Earth causes day and night.

• It is the movement of the Earth around the Sun on its elliptical path.

• The Earth takes 365 ¼  days for it to complete one revolution.

• It revolves around the Sun at a speed of 30 km per second. For the sake of convenience, we take it as 365 days and call it a year.

• The inclination of the Earth on its axis and its revolution around the Sun cause different seasons.

3. Explain the characteristics of the various spheres of the Earth.

• The Lithosphere is the land on which we live. It is the solid outer layer of the Earth consisting of rocks and soils.

• The hydrosphere consists of water bodies such as oceans, seas, rivers, lakes, ice caps on mountains and water vapour in the atmosphere.

• Atmosphere is the envelope of air that surrounds the Earth.

• Biosphere consists of distinct zones. Each zone has its own climate, plant and animal life. These zones are known as ecosystems.

1. Study the picture and answer the given questions.

a. Which is the closest planet to the Sun? Mercury

b. Which is the largest planet? Jupiter

c. Which is the farthest planet from the Sun? Neptune

d. Which is the second smallest planet? Mars 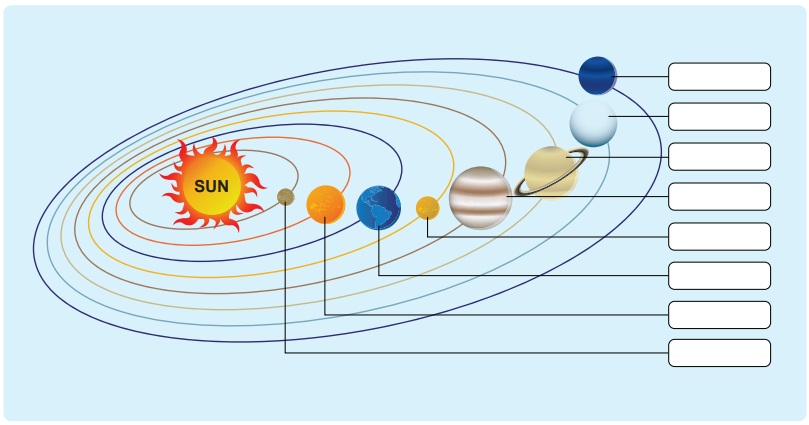 2. Look at the picture and answer the questions given below 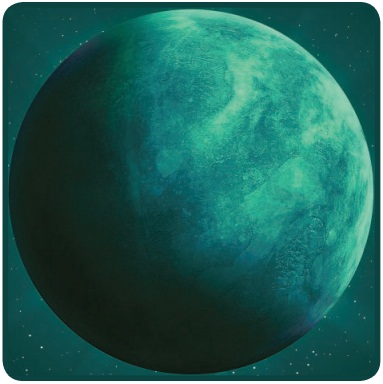 a) Identify the planet Uranus

b) What is the colour of the planet? Green

c) Why is it of this colour? The presence of Methane. 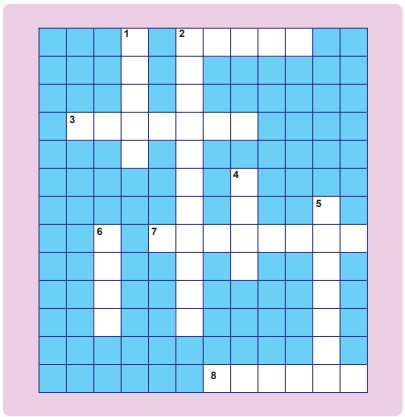 7 I am a gas found in the Sun. HYDROGEN

1. I am the morning star. VENUS

4. I have two natural satellites. MARS

5. I am the farthest planet. NEPTUNE

6. An imaginary line passing through the centre of the Earth. AXIS 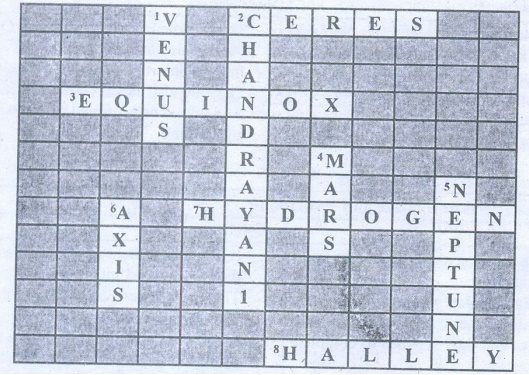