1. Which of the following region has a city more than 6500 years old?

2. Which one of the following is a Tamil city?

3. Which city is not related to the Bay of Bengal?

4. Water management system of Tamils are known from

b. Tanks in Kancheepuram

d. a and b are correct

5. Which is not the oldest city among the following ones?

6. Which city is related to Keezhadi excavation?

II. Tick the appropriate answer­. Match the Statement with the Reason:

1. Statement: Goods were imported and exported from the city Poompuhar.

Reason: Bay of Bengal was suitable for trading with neighbouring countries.

a. Statement is correct, but reason is wrong.

b. Statement and its reason are correct.

c. Statement is wrong, but reason is correct.

d. Both are wrong.

Answer: b. Statement and its reason are correct.

2. a. Thirunavukkarasar said “kalviyil karaiillatha”. This statement refers to the city Kancheepuram.

b. Hieun Tsang said, “Kancheepuram is one among the seven-sacred places of India”.

c. Kalidasa said, “Kancheepuram is the best city among the cities”

a. only a is correct

b. only b is correct

c. only c is correct

d. All are correct

Answer: d. All are correct

3. Find out the correct statement

d. Pearls were exported from Uvari near Korkai.

Answer: d. Pearls were exported from Uvari near Korkai.

4. Find out the wrong statement.

b. Hien Tsang came to the Tamil city of Kancheepuram.

d. Iraq is mentioned in Pattinapalai.

5. Find out the correct pair

6. Find out the wrong pair

III. Fill in the blanks:

2. Kanchi is known as the city of temples.

2. Women also purchased from Allangadi of Madurai without fear. TRUE

3. Many rock cut temples were made during the Pallava period. TRUE

V. Answer in one word:

1. What do you know about the term ‘export’?

The term export means trading our country product to other nations.

2. Mention the epic and the sangam poem you read in this lesson.

3. Which is the oldest city in Thondai Nadu?

Kanchi is the oldest city in Thondai Nadu

4. Point out any one difference between a village and a city.

Village is not polluted and cities were polluted

5. Which civilisation is associated with the city Lothal?

6. Name the oldest civilization of the world

1. Write a brief note on ancient cities of India.

Harappa and Mohenjodaro was the ancient cities of India.

3. Discuss the sources available to know about Tamil cities.

The Tamil epics such as silapathikaram, pathinapallai Cave temples, kallanai and water tanks

4. Write about the kings who ruled Madurai.

5. Mention the other names of Madurai.

7. Name the scholars who were born at Kancheepuram.

8. Which is known as city of lakes? Why?

• Hundreds of lakes were created for storing water around the town of Kanchi.

• These lakes were well connected with canals.

• During the later period, Kanchi came to be known as the district of lakes.

1. Write a short note on Iraq.

2. Write a paragraph about the city Poompuhar with special reference to trade.

Numerous merchants from foreign countries such as Greece and Rome landed at Poompuhar. Due to busy and continuous trade, many of them stayed on indefinitely in Poompuhar. There are evidences of foreigner settlements in the town. People speaking many languages inhabited Poompuhar in its glorious days. As loading and unloading of ships took some months, the foreign traders began to interact with the local people during that period. This enabled the natives to learn foreign languages for communication. Similarly, the foreigners also learnt Tamil to communicate with the natives. This contact facilitated not only exchange of goods but also languages and ideas resulting in cultural blending. The traders of Poompuhar were known for their honesty and integrity.

3. Write about the accounts given by scholars about Kanchi.

• Kanchi is the oldest town in Thondai Nadu.

• Kanchi is also known as the temple town.

• During the Pallava period, a large number of cave temples were built.

• The Buddhist monk Manimegalai spent the last part of her life at Kanchi speaks highly of that town.

5. Kancheepuram was famous for education. Prove this statement.

• Poet Kalidasa says, “Kanchi is the best of the towns”.

• Hieun Tsang remarked that Kanchi can be counted as one among the seven sacred places like Budh Gaya and Sanchi.

1. Make an album about Keezhadi excavations.

4. Prepare a booklet describing the famous lakes of Tamil Nadu.

5. Make a booklet about the famous cities of Tamil Nadu.

6. Go to library and find out the places of importance in your district.

Poompuhar was located on which river bank? Ans: Cauvery

Which district is known as the district of lakes? Ans: Kanchi

Name the ancient city which had Tamil Sangam. Ans: Madurai

To which Tamil kingdom did the southern districts of Tamil Nadu belong to during the Sangam Age? Ans: Pandyas

What is the name of evening market during the Sangam Age? Ans: Allangadi

What is trade? Ans: The act of buying and selling goods and services is called trade.

Name a port located on the shore of Bay of Bengal. Ans: Chennai

1. Make a handout that shows the importance of the place where you live.

Mark the following places in a South India map. 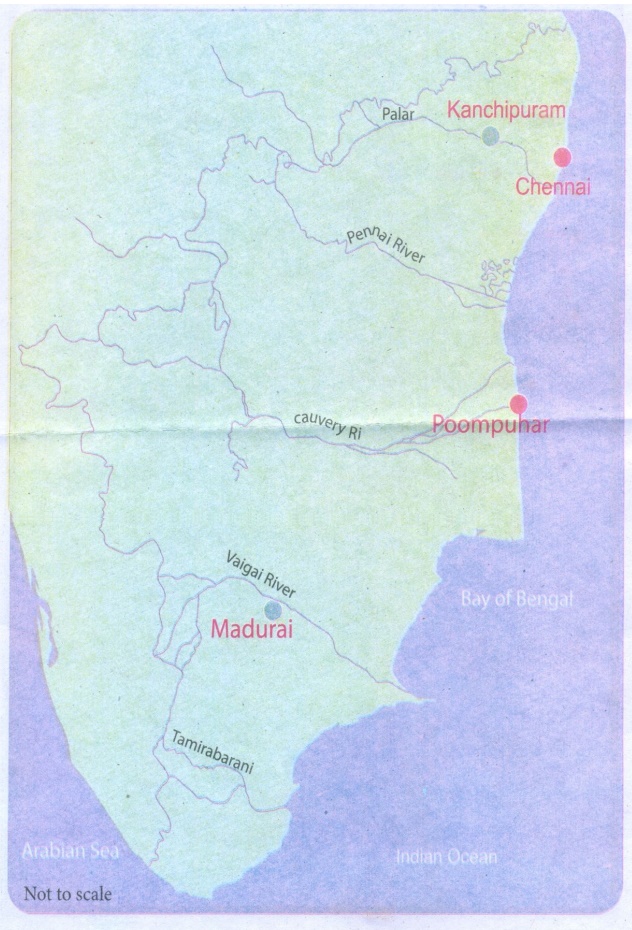