I. Choose the correct answer:

1. What metals were known to the people of Indus Civilization?

a. Copper, bronze, silver, gold, but not iron

b. Copper, silver, iron, but not bronze

Answer: a. Copper, bronze, silver, gold, but not iron

3. River valleys are said to be the cradle of civilisation because

a. Soil is very fertile.

b. They experience good climate.

c. They are useful for transportation.

Answer: a. Soil is very fertile.

II. Match the Statement with the Reason. Tick the appropriate answer :

Reason: It has well planned cities with advanced drainage system.

c. Statement is true, but the reason is wrong.

Answer: a) Statement and reason are correct.

Reason: Harappans did not know the use of iron.

c. Statement is correct, but the reason is wrong.

Answer: a. Statement and reason are correct.

3. Statement: The engineering skill of Harappans was remarkable.

Reason: Building of docks after a careful study of tides, waves and currents.

c. Statement is correct, but the reason is wrong.

Answer: a. Statement and reason are correct.

4. Which of the following statements about Mohenjo-Daro is correct?

a. Gold ornaments were unknown.

b. Houses were made of burnt bricks.

c. Implements were made of iron.

d. Great Bath was made water tight with the layers of natural bitumen

Answer: d. Great Bath was made water tight with the layers of natural bitumen

1. Uniformity in layout of town, streets, and brick sizes

2. An elaborate and well laid out drainage system

Which of the above statements are correct?

6. Circle the odd one

7. Find out the wrong pair

III. Fill in the Blanks

1. Indus valley is the oldest civilisation.

2. Archaeological Survey of India was founded by New Delhi.

3. Granaries were used to store grains.

1. Mehergarh is a Neolithic site. True

2. Archaeological survey of India is responsible for preservation of cultural monuments in the country. False

4. The earliest form of writings was developed by Chinese. False

VI. Answer in one or two sentences:­

1. What are the uses of metal?

The metals are used for making tools.

2. Make a list of baked and raw foods that we eat.

3. Do we have the practice of worshipping animals and trees?

Yes, we have the practice of worshipping animals and trees

4. River valleys are cradles of civilisation. Why?

Responsible for the growth of civilisation.

5. Just because a toy moves doesn’t mean its modern. What did they use instead of batteries?

It is roly-poly toy made of terracotta material. The centre of gravity and total weight of the doll is concentrated at its bottom-most point, generating a dance like continuous movement with slow oscillations.

6. Dog was the first animal to be tamed. Why?

Dogs could sniff other animals and chase them away

7. If you were an archaeologist, what will you do?

Research about the past ancient history

8. Name any two Indus sites located in the Indian border?

9. In Indus civilisation, which feature you like the most? Why?

10. What instrument is used nowadays to weigh things?

1. What method is used to explore buried buildings nowadays?

• Archaeologists study the physical objects such as bricks, stones or bits of broken pottery (sherds) to ascertain the location of the city and time that it belong to.

It is a historical period characterised by the use of articles made of bronze.

• Priority for hygiene and public health

• Solid agricultural and artisanal base

4. Can you point out the special features of their drainage system?

• Many of these cities had covered drains. The drains were covered with slabs or bricks.

• Each drain had a gentle slope so that water could flow.

• Holes were provided at regular intervals to clear the drains.

• House drains passed, below many lanes before finally emptying into the main drains.

• Every house had its own soak pit, which collected all the sediments and allowed only the water to flow into the street drain.

5. What do you know about the Great Bath?

• The great bath was a large, rectangular tank in a courtyard.

• It may be the earliest example of a water-proof structure.

• The bath was lined with bricks, coated with plaster and made water-tight using layers of natural bitumen.

• There were steps on the north and south leading into the tank.

• There were rooms on three sides.

• Water was drawn from the well located in the courtyard and drained out after use.

6. How do you know that Indus people traded with other countries?

• Standardised weights and measures were used by them. They used sticks with marks to measure length.

• There is evidence for extensive maritime trade with Mesopotamia. Indus Seals have been found as far as Mesopotamia (Sumer) which are modern-day Iraq, Kuwait and parts of Syria.

• King Naram-Sin of Akkadian Empire (Sumerian) has written about buying jewellery from the land of Melukha (a region of the Indus Valley).

• Cylindrical seals similar to those found in Persian Gulf and Mesopotamia have also been found in the Indus area. This shows the trade links between these two areas.

• A naval dockyard has been discovered in Lothal in Gujarat. It shows the maritime activities of the Indus people.

1. Observe the following features of Indus Civilisation and compare that with the present day.

b. Burnt bricks: Because they do not dissolve in water or rain.

c. Underground drainage system: the drainage was covered with slabs. occasionally its cleaned by workmen

d. Weights and measurement: Indus people had developed a system of standardised weights and measures. Ivory scale found in Lothal in Gujarat is 1704mm (the smallest division evory recorded on a scale of other contemporary civilisations).

e. Dockyard: Lothal A naval dockyard has been discovered in Lothal in Gujarat. It shows the maritime activities of the Indus people.

2. Agriculture was one of their occupations. How can you prove this? (with the findings)

• The seed of fruits and the nuts they ate were thrown into the soil.

• During rains, the soil gave it life. Some days later, the saplings sprouted from the soil.

• By observation and logic, they learn that:

a. a plant grows from a single seed and yields lots of fruits and vegetables.

b. seeds that fall in the river beds sprout easily.

d. alluvial soil is more suitable for plant growth than any other.

With the above knowledge they gained, they realised that with proper sowing and nurturing, they could increase the number of plants more than the ones that grew naturally. Thus agriculture and farming came into existence.

3. Many pottery and its pieces have been discovered from Indus sites. What do you know from that?

The broken pieces of pottery have animal figures and geometric designs on it. We can understand their significance and age period.

4. A naval dockyard has been discovered in Lothal. What does it convey?

A naval dockyard has been discovered in Lothal in Gujarat. It shows the maritime activities of the Indus people.

5. Can you guess what happened to the Harappans?

By 1900 BCE, the Harappan culture had started declining.

It is assumed that the civilisation met with

(Containing more information about objects collected from Mohenjo-Daro and Harappa.)

2. You are a young archaeologist working at a site that was once an Indus city. What will you collect?

(Take square cards and stick picture in one card and the information for the same picture in another card. Circulate among the groups and tell them to match the picture with information.)

4. Draw your imaginary town planning in a chart.

5. Make a model of any one structure of Indus Civilisation using clay, broken pieces of bangles, matchsticks, woollen thread and ice cream sticks.

6. Can you imagine how toys have changed through the ages? Collect toys made of 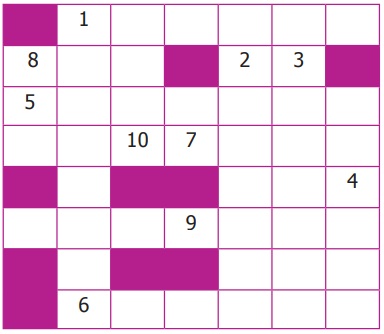 6. A dockyard has been found

8. It is used to make water tight.

9. From this we can get lot of information

10. This is responsible for research 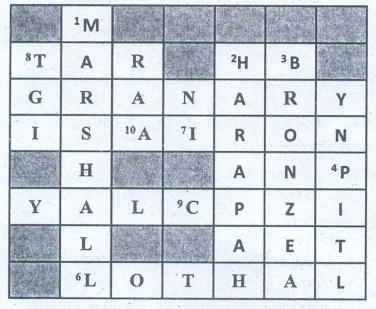 Rapid Fire Quiz (Do it in groups)

1. Which crop did Indus people use to make clothes?

2. Which was the first Indus city discovered?

3. Where was Indus Civilisation?

4. Which animal was used to pull carts?

5. Which metal was unknown to Indus people?

6. What was used to make pots?

1. Making an animal or a pot out of clay. 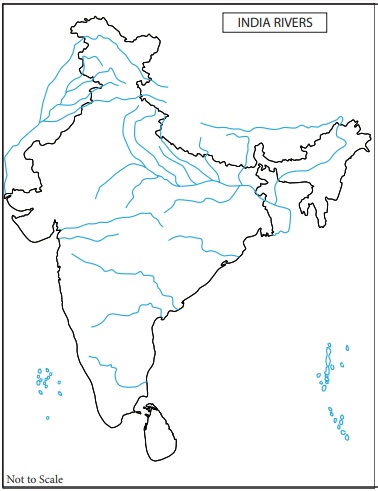 1. Mark any four Indus sites located within the Indian border. 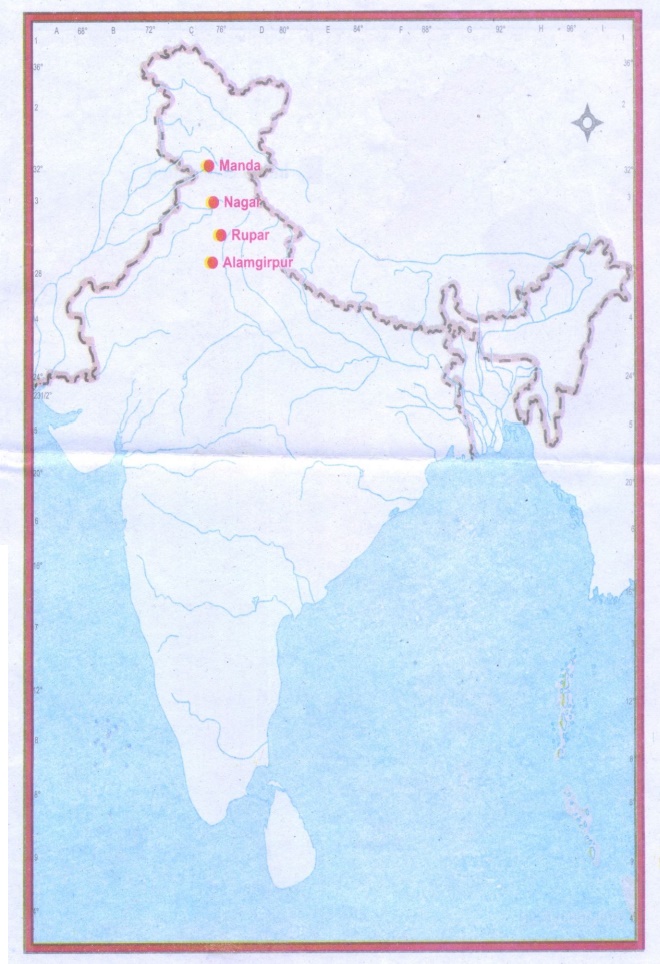 2. On the river map of India, colour the places where Indus civilisation spread. 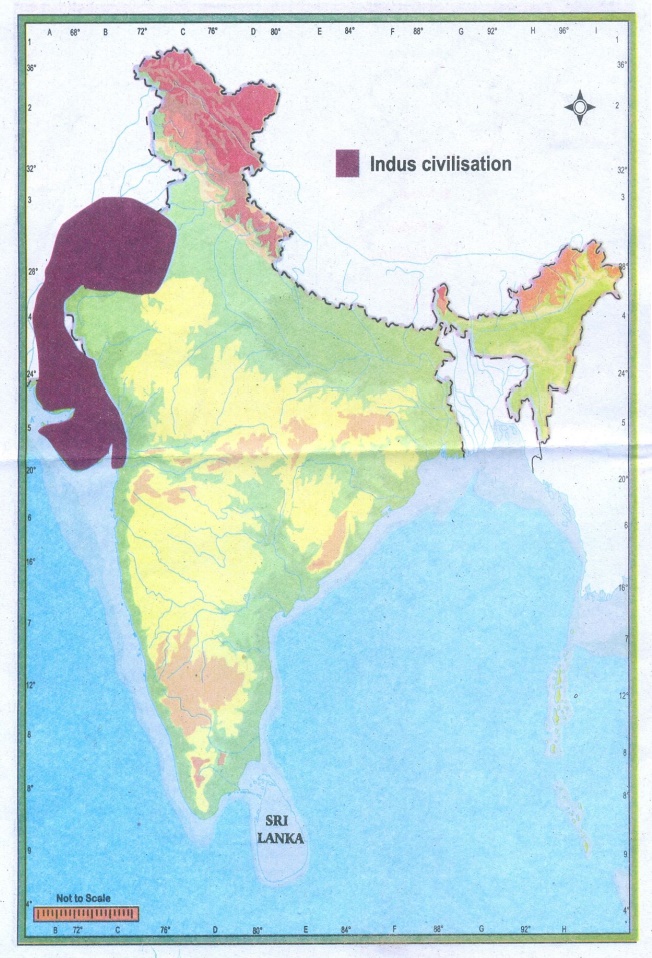 3. Mark the following places in the given India map: 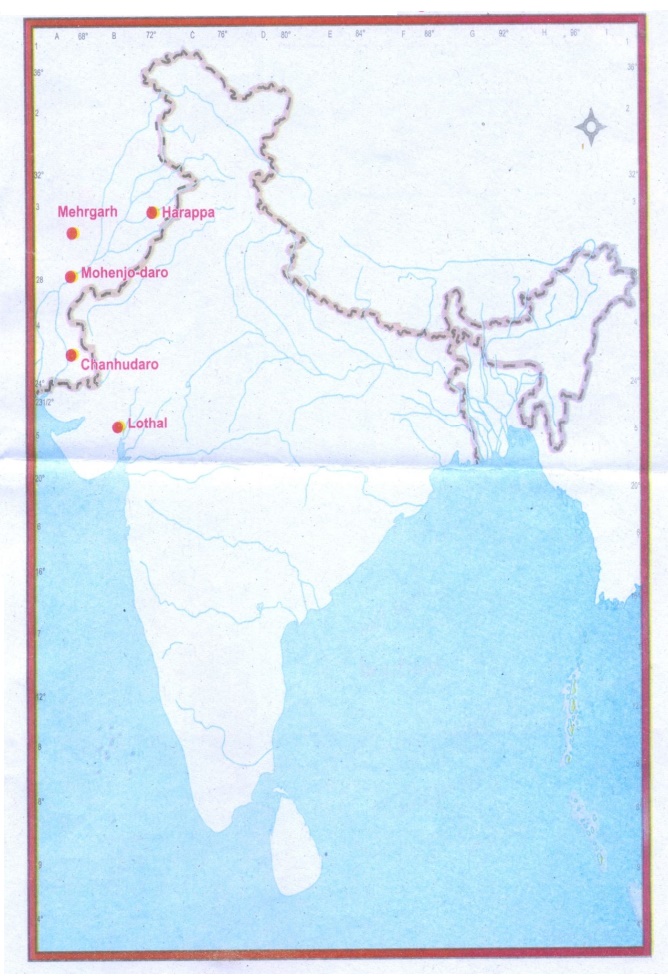 • What did Charles Masson see?

He saw,’’ruined brick castle with very high walls and towers built on a hill”.

• List three things people used which we use today?

• What else has been found?

The Indus valley people did not leave great structures, like the pyramids of Egypt or the great walls of china. Their cities have almost vanished. Today , visitors see ruins dug into by archaeologists. Skills such as trading , farming and brick-makiing were passed on. Indus people helped shape the later cultures of India and Pakistan.

• Can you say three things unknown to Indus people?

• Which metal was unknown to Indus people?

• Which is the oldest civilisation in the world?

• Why dog was the first animal to be tamed?

Sniff of dog helped them to identify the dangerous animals

• Who were the first people to grow cotton?

• Which institution is responsible for archaeological research?

The Archaeological Survey of India

• Was there any river valley civilisation found in TamilNadu?

• Name any two Harappan sites which were found in Indian border?

• Can we say the Indus cities as cities of children?

Toys like carts, cows with movable heads and limbs, clay balls, tiny doll, a small clay monkey, terracotta squirrels eating a nut, clay dogs and male dancer have been found. They made various types of toys using terracotta, which show that they enjoyed playing.