I. Choose the correct answer :

II. Match the statement with the Reason. Tick the appropriate answer:

1. Statement: Migration of man of different Parts of the world resulted in changes of physic and colour

a. Statement is correct.

b. Reason is wrong.

c. Statement and Reason is correct.

d. Statement and Reason is wrong.

III. Find out the Wrong pair:

a. Australopithecus - Walked on both legs

a. Australopithecus - Walked on both legs (a)

IV. Fill in the blanks :

1. Anthropologists unearthed the  footprints of humans in Tanzania.

2. Millions of years ago, our ancestors led a nomadic life.

3. The main occupations of the ancient  humans hunting were and food gathering.

4. The invention of plough made farming easier.

5. Rock paintings are found at porivarai in Nilgiris.

1. Anthropology is the study of coins. False

2. Homo erectus (Java man) had the knowledge of fire. True

3. The first scientific invention of humans was wheel. True

4. Goat was the first animal to be domesticated by humans. False

VI. Answer in one word :

1. What method is used to find out the age of the excavated materials?

2. What did early humans wear?

Wore hides of animals and barks

3. Where did early humans live?

4. Which animal was used for ploughing?

5. When did humans settle in one place?

Evolution means the process in which human kind changes and develops into an advanced stage.

3. Why did humans move from place to place?

Humans moved place to place for the search of food.

4. Describe the ancient methods of hunting?

Hunting was the main occupation of humans in the past. It was difficult for humans to kill a big animal with a stick or a stone.

The axes were made to cut trees, remove barks, dig pits, hunt animals and remove the skin of animals.

6. How would you define archaeology?

Radio carbon dating was used to ascertain the period.

7. What do you know about anthropology?

Anthropologists attempt, by investigating the whole range of human development and behavior, to achieve a total description of cultural and social phenomena.

1. Importance of invention of wheel from the ancient period to the modern period.

• The invention, of wheel made pot making easier, and the pots made were burnt to make it stronger.

• Wheels were used to travel from one place to other using carts.

Prepare an album collecting the pictures of ancient humans of different ages. 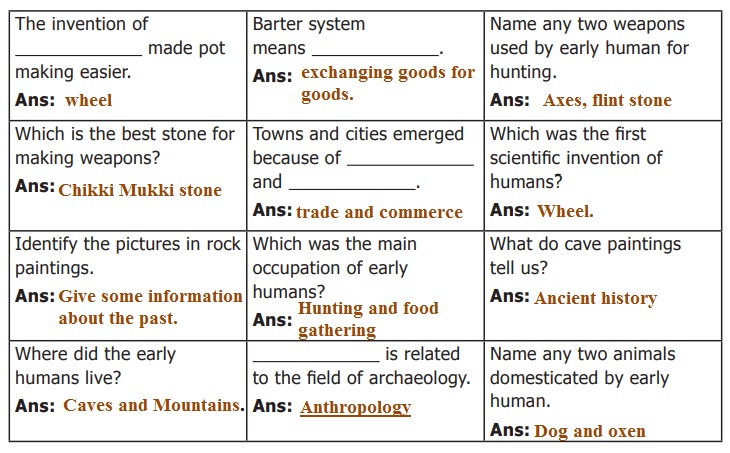 • The invention of wheel made pot making easier.

• Name any two weapons used by early human for hunting.

• Which is the best stone for making weapons? Chikki Mukki stone

• Towns and cities emerged because of trade and commerce

• Which was the first scientific invention of humans? Wheel.

• Identify the pictures in rock painting. Give some information about the past.

• Which was the main occupation of early humans? Hunting and food gathering

• What do cave paintings tell us? Ancient history

• Where did the early human live? Caves and Mountains.

• Anthropology is related to the field of archaeology.

2. Collect different types of moving dolls and tell them to change the wheels with different shapes like square, triangle etc., and find out how it moves.

On the outline map of India, mark the following places: 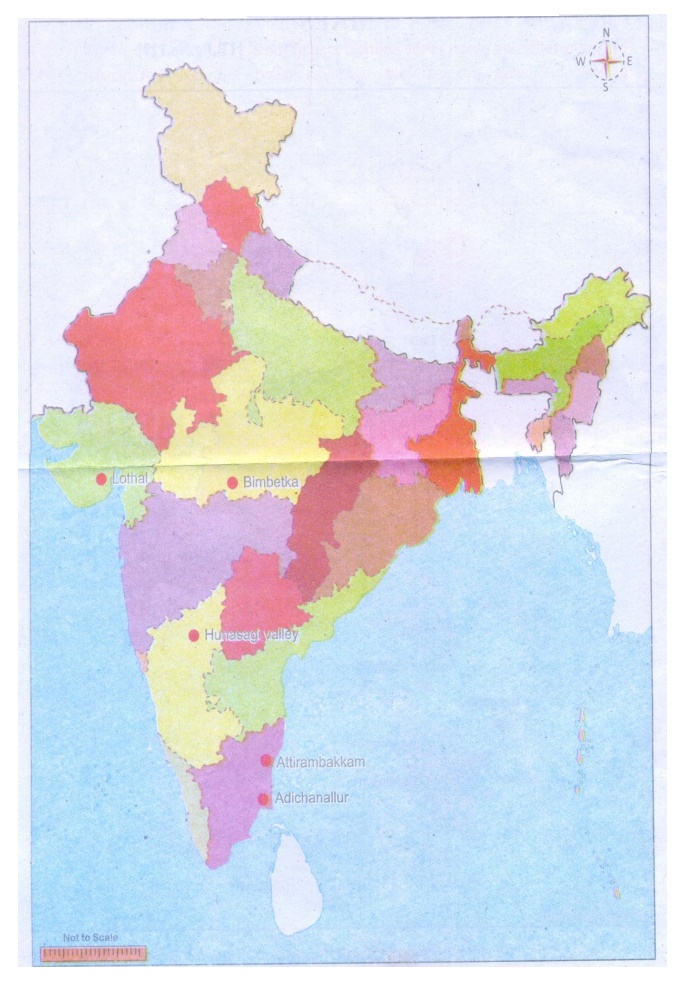