19. What would happen, if the greenhouse gases were totally missing in the earth’s atmosphere?

● If the green house gases are totally missing from earth's atmosphere, then the earth's average surface temperature would be only about (−18°C) (0°F).

● Plants cannot carry out photosynthesis if CO2 is not present. Human beings cannot survive without plants. So, no life on Earth.

● Smog is a combination of smoke and fog which forms droplets that remain suspended in the air.

● Smog is a chemical mixture of gases that forms a brownish yellow haze over urban cities.

21. Which is considered to be earth’s protective umbrella? Why?

● At high altitudes to the atmosphere consists of a layer of ozone (O3) which acts as an umbrella or sheild for harmful UV radiations.

● It protects us from harmful effect such as skin cancer. UV radiation can convert molecular oxygen into ozone as shown in the following reaction.

22. What are degradable and non-degradable pollutants?

● The pollutants which can be easily decomposed by the natural biological processes are called bio-degradable pollutants.

● The pollutants which cannot be decomposed by the natural biological processes are called Non bio-degradable pollutants.

● These pollutants are harmful to living organisms even in low concentration.

● As they are not degraded naturally, it is difficult to eliminate them from our environment.

23. From where does ozone come in the photo chemical smog?

● Photochemical smog is the combination of smoke, dust and fog with air pollutants like oxides of nitrogen and hydrocarbons in the presence of sunlight.

● It forms when the sun shines and becomes worse in the afternoon.

● Chemically it is oxidizing in nature because of high concentration of oxidizing agents NO2 and O3, so it is also calles as oxidizing smog. Photochemical smog is formed through sequence of following reactions.

24. A person was using water supplied by corporation. Due to shortage of water he started using underground water. He felt laxative effect. What could be the cause?

● Excessive concentration (>500ppm) of sulphates in underground drinking water could be the cause for laxative effect. (or)

● Excessive concentration (>500ppm) of sulphates in underground water could be the cause for laxative effect.

25. What is green chemistry?

26. Explain how does greenhouse effect cause global warming 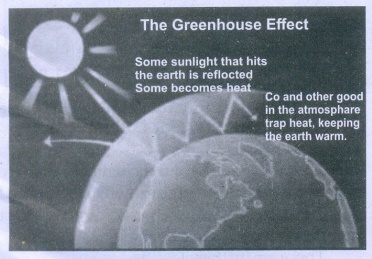 ● The term “ Greenhouse Effect" is used for trapping of heat in the atmosphere by certain gases.

● The earth's atmosphere allows most of the visible light from the sun to pass through and reach Earth's surface.

● As Earth's surface is heated by sunlight, it radiates part of this energy back toward space as longer wavelengths (IR).

● Some of the heat is trapped by CH4, CO2, CFCs and water vapour present in the atmosphere.

● The radiation thus absorbed is partly reemitted to earth's surface. Therefore, the earth's surface gets heated up by a phenomenon called green house effect.

● Thus green house effect may be defined as the heating up of the earth surface due to trapping of infrared radiations reflected by earth's surface by CO2 layer in the atmosphere.

● The heating up of earth through the greenhouse effect is called global warming.

27. Mention the standards prescribed by BIS for quality of drinking water

i) Escherichia Coli (E.Coli) : Not at all

28. How does classical smog differ from photochemical smog?

3: Mainly due to the induced oxidation of SO2, to SO3 which reacts with water yielding sulphuric acid.

4. It is also called as reducing smog.

2. occurs in warm,dry and sunny climate.

3. NO and O3 are strong oxidising agents can give formaldehyde, PAN, acrolein.

4. It is called as oxidizing smog.

29. What are particulate pollutants? Explain any three.

Smoke particulate consists of solid particles (or) mixture of solid and liquid particles formed by combustion of organic matter.

They are formed by particles of spray liquids and condensation of vapours in air.

Fumes are obtained by condensation of vapours released during sublimation, distillation, boiling, calcination and by several other chemical reactions.

30. Even though the use of pesticides increases the crop production, they adversely affect the living organisms. Explain the function and the adverse effects of the pesticides.

Pesticides are the chemicals that are used to kill or stop the growth of unwanted organisms. But these pesticides can affect the health of human beings.

These are further classified as

Insecticides like DDT, BHC, aldrin etc. can stay in soil for long period of time and are absorbed by soil. They contaminate root crops like carrot, raddish, etc.

Organo mercury compounds are used as most common fungicide. They dissociate in soil to produce mercury which is highly toxic.

Herbicides are the chemical compounds used to control unwanted plants. They are otherwise known as weed killers.

Example: sodium chlorate(NaClO3) and sodium arsenite (Na3 As O3). Most of the herbicides are toxic to mammals.

31. Ethane burns completely in air to give CO2, while in a limited supply of air gives CO. The same gases are found in automobile exhaust. Both CO and CO2 are atmospheric pollutants

i. What is the danger associated with these gases

ii. How do the pollutants affect the human body?

● Carbon monoxide is a poisonous gas produced as a result of incomplete combustion of coal are firewood.

● It is released into the air mainly by automobile exhaust.

● It binds with haemoglobin and form carboxy haemoglobin which impairs normal oxygen transport by blood and hence the oxygen carrying capacity of blood is reduced.

● Carbon dioxide is released into the atmosphere mainly by the process of respiration, burning of fossil fuels, forest fire, decomposition of limestone in cement industry etc.

● Green plants can convert CO2 gas in the atmosphere into carbohydrate and oxygen through a process called photosynthesis.

● The increased CO2 level in the atmosphere is responsible for global warming. It causes headache and nausea.

32. On the basis of chemical reactions involved, explain how do CFC’s cause depletion of ozone layer in stratosphere?

● The chloro fluoro derivatives of methane and ethane are referred by trade name Freons. These Chloro Fluoro Carbon compounds are stable, non-toxic, noncorrosive and non- inflammable, easily liquefiable and are used in refrigerators, air- conditioners and in the production of plastic foams.

● CFC's are the exhaust of supersonic air craft's and jumbo jets flying in the upper atmosphere. They slowly pass from troposphere to stratosphere.

● They stay for very longer period of 50 −100 years. In the presence of uv radiation, CFC's break up into chlorine free radical

● Chlorine radical is regenerated in the course of reaction. Due to this continuous attack of Cl thinning of ozone layer takes place which leads to formation of ozone hole.

● It is estimated that for every reactive chlorine atom generated in the stratosphere 1,00,000 molecules of ozone are depleted.

33.How is acid rain formed? Explain its effect

● Rain water normally has a pH of 5.6 due to dissolution of atmospheric CO2 into it. Oxides of sulphur and nitrogen in the atmosphere may be absorbed by droplets of water that make up clouds and get chemically converted into sulphuric acid and nitric acid respectively as a results of pH of rain water drops to the level 5.6, hence it is called acid rain.

● Acid rain is a by-product of a variety of sulphur and nitrogen oxides in the atmosphere. Burning of fossil fuels (coal and oil) in power stations, furnaces, and petrol, diesel in motor engines produce sulphur dioxide and nitrogen oxides. The main contributors of acid rain are SO2 and NO2. They are converted into sulphuric acid and nitric acid respectively by the reaction with oxygen and water.

Some harmful effects are discussed below:

i) Acid rain causes extensive damage to buildings and structural materials of marbles. This attack on marble is termed as Stone leprosy.

iii) It is harmful for agriculture, trees and plants as it dissolves and removes the nutrients needed for their growth.

iv) It corrodes water pipes resulting in the leaching of heavy metals such as iron, lead and copper into the drinking water which have toxic effects.

v) It causes respiratory ailment in humans and animals.

i. BOD and COD

The total amount of oxygen in milligrams consumed by microorganisms in decomposing the waste in one liter of water at 20°C for a period of 5 days is called Biochemical Oxygen Demand (BOD) and its value is expressed in ppm.

● BOD is used as- a measure of degree of water pollution. Clean water would have BOD value less than 5 ppm whereas highly polluted water has BOD value of 17 ppm or more.

● Chemical Oxygen Demand (COD) is defined as the amount of oxygen required by the organic matter in a sample of water for its oxidation by a strong oxidising agent like K2Cr2O7 in acid medium for a period of 2 hrs.

The viable particulates are the small size living organisms such as bacteria, fungi, moulds, algae, etc. which are dispersed in air. Some of the fungi cause allergy in human beings and diseases in plants.

The non-viable particulate are small solid particles and liquid droplets suspended in air. They help in the transportation of viable particles.

35. Explain how oxygen deficiency is caused by carbon monoxide in our blood? Give its effect

● Carbon monoxide is a poisonous gas produced as a result of incomplete combustion of coal are firewood. It is released into the air mainly by automobile exhaust.

● It binds with haemoglobin and form carboxy haemoglobin which impairs normal oxygen transport by blood and hence the oxygen carrying capacity of blood is reduced.

36. What are the various methods you suggest to protect our environment from pollution?

1) Waste management: Environmental pollution can be controlled by proper disposal of wastes.

2) Recycling: A large amount of disposed waste material can be reused by recycling the waste, thus it reduces the land fill and converts waste into useful forms.

4) Use of fuels with lower sulphur content (e.g., washed coal).

Efforts to control environmental pollution have resulted in development of science for synthesis of chemical favorable to environment and it is called green chemistry.