Hybridisation is the process of mixing of atomic orbitals of the same atom with comparable energy to form equal number of new equivalent orbitals with same energy.

When two atomic orbitals overlap linearly along the axis, the resultant bond is called a sigma (σ) bond. This overlap is also called ‘head -on everlap’ or ‘axial overlap’.

33. In CH4, NH3 and H2O, the central atom undergoes sp3 hybridisation - yet their bond angles are different. why?

No lone pair of electrons

The electronic configuration of Boron 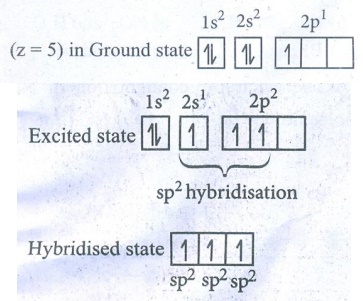 ● In the GS, Boron has only one unpaired electron in the valence shell.

● So, one electron from the 2s orbital is promoted to the 2p orbital in the excited state.

● This overlap takes place along the axis and forming three covalent bonds. 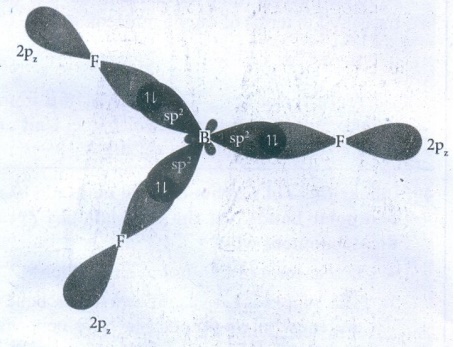 35. Draw the M.O diagram for oxygen molecule calculate its bond order and show that O2 is paramagnetic. 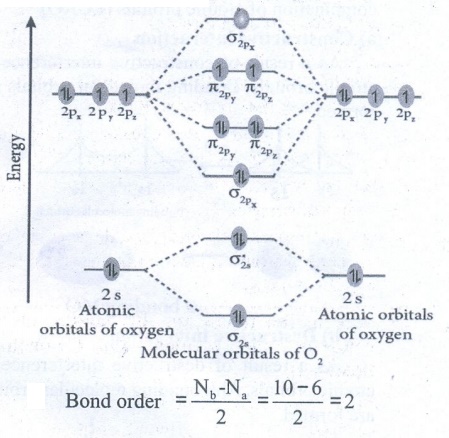 ● Oxygen molecule has two unpaired electrons. Hence, it is paramagnetic.

36. Draw MO diagram of CO and calculate its bond order. 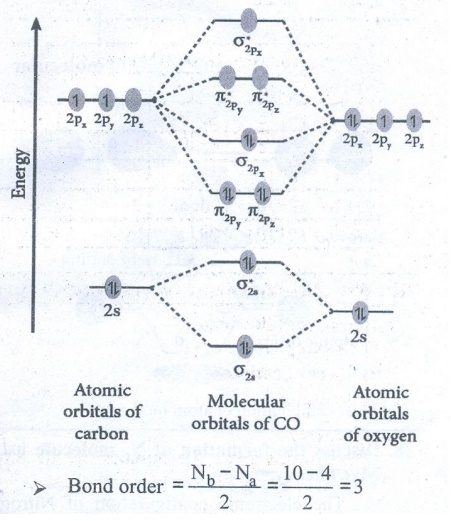 37. What do you understand by Linear combination of atomic orbitals in MO theory.

There are two interactions of Linear combination of atomic orbitals (LCAO)

As a result of constructive interference of atomic orbitals, Bonding molecular orbitals are formed. 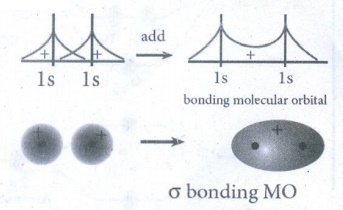 As a result of destructive interference of atomic orbitals, Anti bonding molecular orbitals are formed. 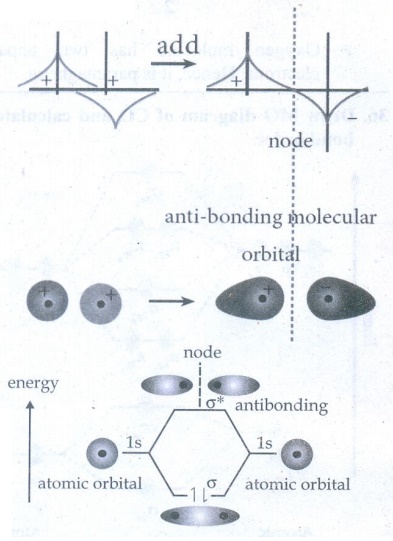 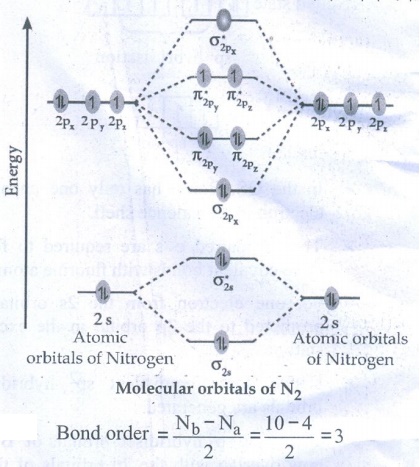 ● N2 molecule has no unpaired electrons. Hence, it is diamagnetic.

The polarity of a covalent bond can be measured in terms of dipole moment.

μ is a vector scale. The direction of μ from the negative charge to positive charge. Unit of Dipolement is columb meter (Cm).

● The dipole moments of two polar bonds are equal in magnitude but have opposite direction.

41. Draw the Lewis structures for the following species. 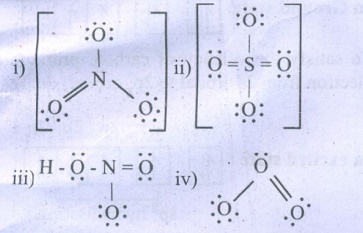 42. Explain the bond formation in BeCl2 and MgCl2.

Electronic configuration of Be (Z = 4) in 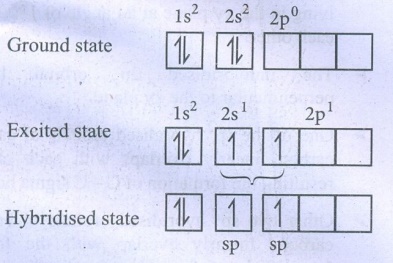 ● Each of the sp hybridised orbitals linearly overlap with orbital of the chlorine to form a covalent bond between Be and Cl.

● One Mg2+ and two Cl− ions are held together by electrostatic attractive force.

● The strength of a covalent bond depends upon the extent of overlap of atomic orbitals.

● Greater the overlap, larger is the energy released and stronger will be the bond formed.

● Overlaping along the axis (σ bond) is greater than the sidewise overlaping (π -bond).

The bond energy is defined as the minimum amount of energy required to break one mole of a particular bond in molecule in their gaseous state. The unit of bond energy is kJmol−1.

45. Hydrogen gas is diatomic where as inert gases are monoatomic – explain on the basis of MO theory.

● According to MO theory,

● Bond order gives the number of covalent bonds between the two combining atoms.

● From the MO diagram of H2 molecule,

46. What is Polar Covalent bond? explain with example.

In the case of covalent bond formed between atoms having different electronegativities, the atom with higher electronegativity will have the greater tendency to attract the shared pair of electrons more towards itself than the other atom.

(Electronegativities of Hydrogen and Fluorine are 2.1 and 4.0 respectively)

47. Considering x- axis as molecular axis, which out of the following will form a sigma bond.

● In this structures, the relative position of the atoms are same.

● They only differ in the position of bonding and lone pair of electrons.

49. Explain the bond formation in ethylene and acetylene.

● Molecular fomula of Ethylene is : C2H4

To satisfy the valency of carbon, promote an electron from 2s orbital to 2pz orbital.

● The three equivalent sp2 hybridised orbitals lying in the xy plane at an angle of 1200 to each other.

● The unhybridised 2pz orbital lies perpendicular to the xy plane.

● One of the sp2 hybridised orbitals of each carbon linearly overlaps with each other resulting the formation of C - C sigma bond.

● Other two sp2 hybridised orbitals of both carbons linearly everlap with the four 1s orbitals of four H atoms leading the formation of four C - H sigma bonds on each carbon.

● The unhybridised 2pz orbitals of each corbon atoms can overlap only sideways (lateral overlap) result in the formation of pi bond between two carbon atoms.

● Molecular formula of Acetylene is C2H2

To satisfy the valency of carbon, promote an electron from 2s orbital to 2pz orbital.

● The unhybridised 2py and 2pz orbitals lie perpendicular to the molecular axis.

● One of the two sp hybridized orbitals of each carbon linearly overlap with each other, resulting the formation of C - C sigma bond.

● The other sp hybridised orbital of both carbon linearly overlap with two 1s orbitals of 2H atoms leading the formation of one C-H sigma bond on each carbon.

● The unhybridised 2Py and 2PZ orbitals of each Carbon atoms can overlap sideways (lateral overlap) result in the formation of pi bond between the two Carbon atoms. 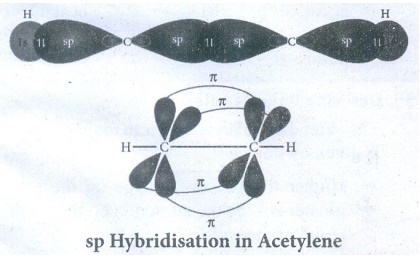 50. What type of hybridisations are possible in the following geometeries?

51. Explain VSEPR theory. Applying this theory to predict the shapes of IF7, and SF6

Shape of IF7 molecule: 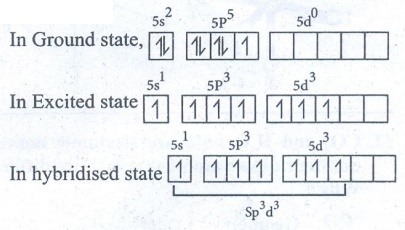 ● This orbitals linearly overlap with 2Pz orbitals of seven F atoms, leading the formation of 7 σ-bonds. 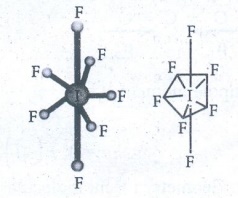 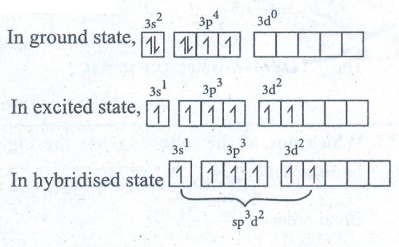 ● This orbitals linearly overlap with 2Pz orbitals of six F atoms, leading the formation of 6 σ-bonds. 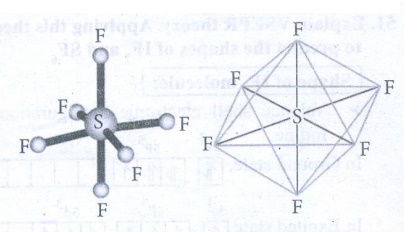 52. CO2 and H2O both are triatomic molecule but their dipole moment values are different. Why?

● Reason: The DPM of two polar bonds are equal in magnitude but opposite in direction. 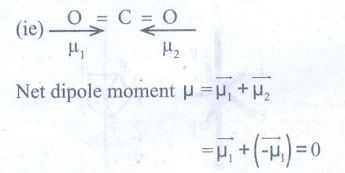 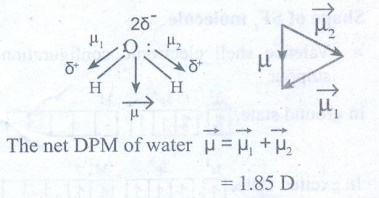 Ex: LiCl is an ionic compound. But, it shows covalent character. Therefore, it is soluble in organic solvent like Ethanol.

This can be explained on the basis of ‘Polarisation’.

● The positively charged cation attracts the valence electrons of anion while repelling the nucleus.

● This causes a distortion in the electron cloud of the anion and its electron density drifts towards the cation.

● This results in some sharing of the valence electrons between these ions.

● Thus, a partial covalent character is developed between them. This is called polarisation.

● The ability of a cation to polarise an anion is called ‘polarising ability’. The tendency of an anion to get polarized is called polarisability.

The extend of polarisation in an ionic compound is given by Fajans rule.

● Higher the positive charge on the cation, greater will be the attraction on the electron cloud of the cation.

● Higher the magnitude of negative charge on the anion, greater is its polarisability.

● Hence, the increase in charge on cation or in anion, increases the covalent character.

∴ I− will be more polarised.