I.  Choose the correct answer

1. Which method of crop improvement can be practised by a farmer if he is inexperienced?

3. Himgiri developed by hybridisation and selection for disease resistance against rust pathogens is a variety of __________.

4. The miracle rice which saved millions of lives and celebrated its 50th birthday is _______

5. Which of the following is used to produce products useful to humans by biotechnology techniques?

a. enzyme from organism

6. We can cut the DNA with the help of

8. DNA fingerprinting is based on the principle of identifying ________

9. Organisms with modified endogenous gene or a foregin gene are also known as

II.  Fill in the blanks

3. Colchicine is the chemical used for doubling the chromosomes.

5. Rice normally grows well in alluvial soil, but atomita 2 is a rice variety produced by mutation breeding that grows well in saline soil.

10. In gene cloning the DNA of interest is integrated in a vector.

III.  State whether true or false. If false, write the correct statement

2. The process of producing an organism with more than two sets of chromosome is called mutation. - False

The process of producing an organism with more than two sets of chromosome is called polyploidy.

3. A group of plants produced from a single plant through vegetative or asexual reproduction are called a pureline. - False

A group of plants produced from a single plant through vegetative or asexual reproduction are called a Clone.

Bt gene from bacteria produces a toxin that can kill insects.

Column A Column B

Column A - Column B

V.  Understand the assertion statement, justify the reason given and choose the correct choice

a. Assertion is correct and reason is wrong

b. Reason is correct and the assertion is wrong

c. Both assertion and reason is correct

d. Both assertion and reason is wrong.

1. Assertion: Hybrid is superior than either of its parents.

Answer: a. Assertion is correct and reason is wrong

Reason: It promotes the movement of sister chromatids to the opposite poles.

Answer: d. Both assertion and reason is wrong.

Reason: Desired genes are inserted without introducing the undesriable genes in target organisms.

Answer: c. Both assertion and reason is correct

VI.  Answer in a sentence

1. Give the name of wheat variety having higher dietary fibre and protein.

2. Semi-dwarf varieties were introduced in rice. This was made possible by the presence of dwarfing gene in rice. Name this dwarfing gene.

The dwarfing gene was got from a dwarf variety of rice from China, named Dee-geo-woo-gen (DGWG).

Genetic engineering is the manipulation and transfer of genes from one organism into another to create a new DNA called as recombinant DNA (rDNA).

4. Name the types of stem cells.

5. What are transgenic organisms?

(i) Genetic modification refers to the alteration or manipulation of genes in the organisms using rDNA techniques in order to produce the desired characteristics.

(ii) The DNA fragment inserted is called transgene. Plants or animals expressing a modified endogenous gene or a foreign gene are also known as transgenic organisms.

6. State the importance of biofertiliser.

(i) They are ecofriendly.

(ii) They do not cause pollution like artificial fertilizers.

(iv) They are cheaper and economical.

1. Discuss the method of breeding for disease resistance.

The above mentioned characteristics seen in different varieties of wheat helped India to achieve high productivity.

1. They are of variable potency. : 1. These cells can carry out specific functions only.

4. Source of embryonic stem cells are early embryo. : 4. Adult stem cells can be got from amniotic fluid, bone marrow, etc.,

(i) DNA fingerprinting technique is widely used in forensic applications like crime investigation such as identifying the culprit It is also used for paternity testing in case of disputes.

(ii) It also helps in the study of genetic diversity of population, evolution and speciation.

6. How are stem cells useful in regenerative process?

(i) Sometimes cells, tissues and organs in the body may be permanently damaged or lost due to genetic condition or disease or injury.

(ii) In such situations stem cells are used for the treatment of diseases which is called stem-cell therapy.

(iii) In treating neurodegenerative disorders like Parkinsv./s disease and Alzheimer’s disease neuronal stem cells can be used to replace the damaged or lost neurons.

7. Differentiate between outbreeding and inbreeding.

1. It is the breeding of unrelated animals. : 1. It refers to the mating of closely related animals within the same breed for about 4-6 generations.

2. The hybrids are stronger and vigorous than their parents. : 2. It helps to accumulate superior genes and eliminate undesirable genes.

1. What are the effects of hybrid vigour in animals.

(i) Increased production of milk by cattle.

Developed by mating the bulls of exotic breeds and cows of indigenous breeds.

2. Describe mutation breeding with an example.

Mutation is defined as the sudden heritable change in the nucleotide sequence of DNA in an organism. It is a process by which genetic variations are created which in turn brings about changes in the organism. The organism which undergoes mutation is called a mutant.

Two types of mutagens : The factors which induce mutations are known as mutagens or mutagenic agents.

Some achievements of mutation breeding are

3. Biofortification may help in removing hidden hunger. How?

(i) Hidden hunger is a chronic lack of vitamins and minerals that often has no visible warning signs. People who suffer from it may not even be aware of it.

(ii) This can lead to severe consequences. Hidden hunger may lead to mental impairment, poor health and productivity or even death.

Biofortification is the scientific process of developing crop plants enriched with high levels of desirable nutrients like vitamins, proteins and minerals. Some examples of crop varieties developed as a result of biofortification are given below:

(i) Protina, Shakti and Rathna are lysine rich maize hybrids (developed in India).

4. With a neat labelled diagram explain the techniques involved in gene cloning.

(i) A clone is a genetically exact copy of an organism.

(ii) In gene cloning, a gene or a piece of DNA fragment is inserted into a bacterial cell where DNA will be multiplied (copied) as the cell divides.

(i) Isolation of desired DNA fragment by using restriction enzymes.

(ii) Insertion of the DNA fragment into a suitable vector (Plasmid) to make rDNA.

(iv) Selection and multiplication of recombinant host cell to get a clone.

Using this strategy several enzymes, hormones and vaccines can be produced. 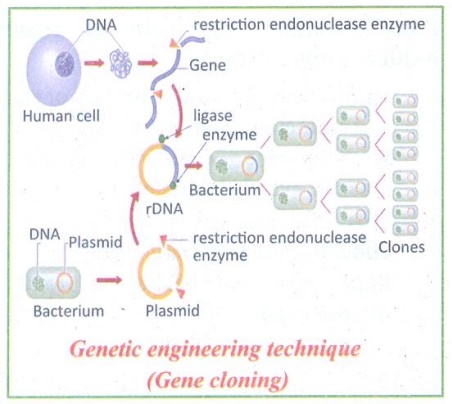 5. Discuss the importance of biotechnology in the field of medicine.

Using genetic engineering techniques medicinally important valuable proteins or polypeptides that form the potential pharmaceutical products for treatment of various diseases have been developed on a commercial scale.

(i) Insulin used in the treatment of diabetes.

(v) Development of vaccines against various diseases like Hepatitis B and rabies.

2. Organic farming is better than Green Revolution. Give reasons

Green revolution is the process of increasing food production through high yielding crop varieties and modern agricultural techniques in under developed and developing nations. This has increased production and helped India tide over food crisis. But this requires high yielding varieties of crops got by artificial methods like breeding, use of fertilizers and pesticides.

Some disadvantages have been listed below :

(i) This promotes monoculture of certain desired plant varieties.

(ii) Use of fertilizers I pesticides in excess alters the chemical composition of the soil.

(iv) Environmentalists felt that because of green revolution the soil was affected and certain traditional crops varieties have been neglected.

(i) In contrast organic farming avoids utilization of synthetic fertilizers, chemical pesticides and makes use of green manures, compost and biological pest control which do not harm the environment.

(ii) Further growing different plant species will lead to efficient use of nutrients and cause fewer outbreaks of disease.

3. Polyploids are characterised by gigantism. Justify your answer.

(i) Polyploids are organisms having more than two sets of chromosomes.

(ii) Therefore depending on the degree of ploidy, the number of genes get multiplied. Therefore size of fruits vegetables are oversized.

(iii) These fruits and vegetables also have a market value and their vitamin and mineral content is also high.

4. ‘P’ is a gene required for the synthesis of vitamin A. It is integrated with genome of ‘Q’ to produce genetically modified plant ‘R’.

ii. State the importance of ‘R’ in India.

(i) P - Gene required for synthesis of vitamin A.

Q - Plant whose genome is being altered by integrating gene ‘P’.

R - Genetically modified fortified plant got by integrating gene ‘P’ in the genome of plant ‘S’.

(ii) Importance of ‘R’ in India: The transgenic plants are much stable, with improved nutritional quality, resistant to diseases and tolerant to various environmental conditions. 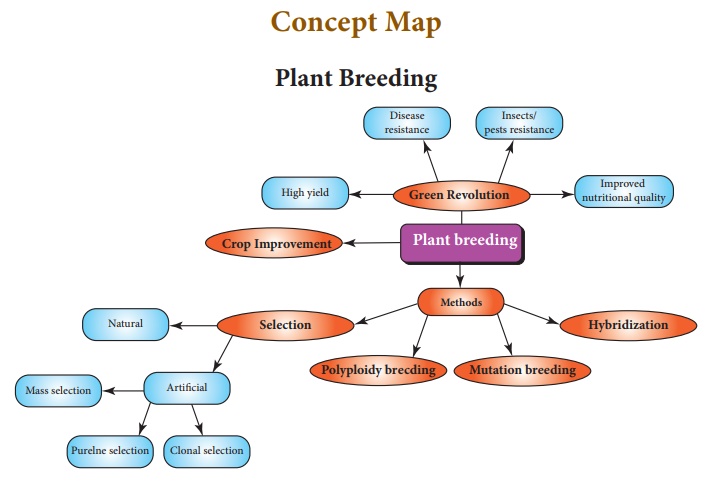 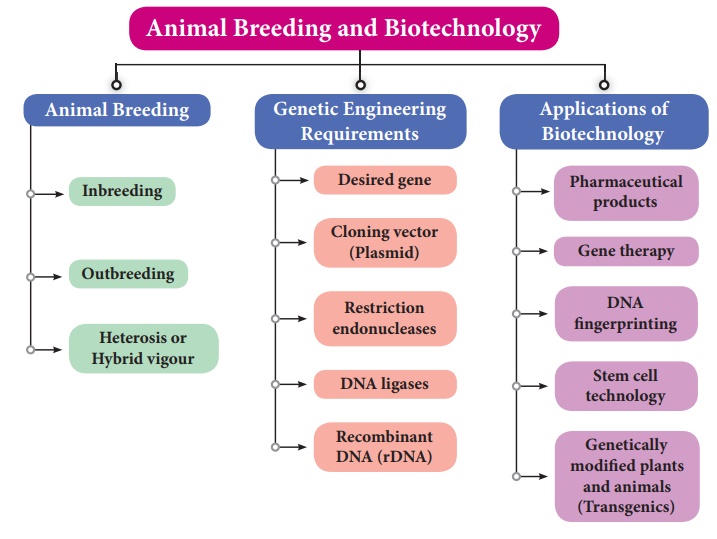