Reproduction in Plants and Animals (Science)

a) Calyx and Corolla

7. What is true of gametes?

a) They are diploid

b) They give rise to gonads

d) They are formed from gonads

8. A single highly coiled tube where sperms are stored, get concentrated and mature is known as

9. The large elongated cells that provide nutrition to developing sperms are

10. Estrogen is secreted by

11. Which one of the following is an IUCD?

1. The embryo sac in a typical dicot at the time of fertilization is 7 celled.

2. After fertilization the ovary develops into fruit .

4. Fertilization is Internal in humans

5. The implantation of the embryo occurs at about 7th day of fertilization

6. Colostrum is the first secretion from the mammary gland after child birth

7. Prolactin is a hormone produced by pituitary gland .

III (a) Match the following

(b) Match the following terms with their respective meanings

a) Parturition - 1) Duration between pregnancy and birth

b) Gestation - 2) Attachment of zygote to endometrium

a) Parturition - Delivery of baby from uterus

b) Gestation - Duration between pregnancy and birth

IV. State whether the following statements are True or False. Correct the false statement

1. Stalk of the ovule is called pedicle. - False

Stalk of the ovule is called funicle.

2. Seeds are the product of asexual reproduction. - False

Seeds are the product of sexual reproduction.

4. The part of the pistil which serves as a receptive structure for the pollen is called as style. - False

The part of the pistil which serves as a receptive structure for the pollen is called stigma.

Wind pollinated flowers are characterized by dry and smooth pollens, (or)

Insect pollinated flowers are characterized by large and spiny pollens.

7. LH is secreted by the posterior pituitary.

10.  The increased level of estrogen and progesterone is responsible for menstruation. - False

The decrease in level of estrogen and progesterone is responsible for menstruation.

V. Answer in a word or sentence

1. If one pollen grain produces two male gametes, how many pollen grains are needed to fertilize 10 ovules?

2. In which part of the flower germination of pollen grains takes place?

4. Mention the function of endosperm.

5. Name the hormone responsible for the vigorous contractions of the uterine muscles.

6. What is the enzyme present in acrosome of sperm?

8. What is the need for contraception ?

It is a birth control measure.

9. Name the part of the human female reproductive system where the following occurs.

a. Fertilization b. Implantation

1. What will happen if you cut planaria into small fragments?

(i) Planaria can be cut into any number of pieces and each piece gives rise to a complete organism.

(ii) The ability , of the lost body parts of an individual organism to give rise to a whole new organism is called regeneration. It takes place by specialized mass of cells e.g Hydra and Planaria.

2. Why is vegetative propagation practiced for growing some type of plants?

(i) Some plants do not produce seeds. Hence vegetative propagation is practiced to propagate such plants.

(ii) Further vegetative propagation will help to retain the parental characters in the next generation as required for some high yielding varieties.

3. How does binary fission differ from multiple fission?

(i) During fertilization process in Angiosperms, the pollen grain produces two sperms.

(ii) One sperm, fuses with the egg and forms a diploid zygote.

(iii) Another sperm fuses with the secondary nucleus (2n) of the embryo sac and forms a triploid primary endosperm nucleus. This is called triple fusion.

(i) Pollination with the help of insects like honeybees, flies is called entomophily.

(ii) To attract insects these flowers are brightly coloured, have smell, and nectar.

(iii) The pollen grains are larger in size, the exine is pitted, spiny etc. So that they can adhere to the stigma.

7. What is colostrum? How is milk production hormonally regulated ?

(i) The first fluid which is released from the mammary gland after child birth is called as colostrum.

(ii) Milk production from alveoli of mammary glands is stimulated by prolactin secreted from the anterior pituitary.

(iii) The ejection of milk is stimulated by posterior pituitary hormone oxytocin.

8. How can menstrual hygiene be maintained during menstrual days?

(i) Sanitary pads should be changed regularly, to avoid infections due to microbes from vagina and sweat from genitals.

(ii) Use of warm water to clean genitals helps to get rid of menstrual cramps.

(iii) Wearing loose clothing rather than tight- fitting clothes will ensure the airflow around the genitals and prevent sweating.

9. How does developing embryo gets its nourishment inside the mother's body?

(i) The placenta is a disc shaped structure attached to the uterine wall and is a temporary association between the developing embryo and maternal tissues.

(ii) It allows the exchange of food materials, diffusion of oxygen, excretion of nitrogenous wastes and elimination of carbon dioxide.

(iii) A cord containing blood vessels that connects the placenta with the foetus is called the umbilical cord.

11. Write the events involved in the sexual reproduction of a flowering plant.

a. Discuss the first event and write the types.

b. Mention the advantages and the disadvantages of that event.

(a) Process of sexual reproduction in flowering plants involves :

Pollination : The transfer of pollen grains from anther to stigma of a flower is called as pollination.

Self-pollination (Autogamy) : Self- pollination is also known as autogamy. The transfer of pollen grain from the anther to the stigma of same flower or another flower borne on the same plant is known as self- pollination. e.g. Hibiscus.

(b) Advantages of self-pollination:

(i) Self-pollination is possible in certain bisexual flowers.

(ii) Flowers do not depend on agents for pollination.

(iii) There are no wastages of pollen grains.

(i) The seeds are less in number.

Cross-pollination is the transfer of pollen from the anthers of a flower to the stigma of a flower on another plant of the same species, e.g. apples, grapes, plum, etc.

(i) Pollination may fail due to distance barrier.

(iii) It may introduce some unwanted characters.

(iv) Flowers depend on the external agencies for pollination.

12. Why are the human testes located outside the abdominal cavity? Name the pouch in which they are present .

(i) The testes are present inside a pouch called scrotal sac.

(ii) The testes are located outside the abdominal cavity because sperms develop at a temperature, several degrees cooler than normal internal body temperature.

13. Luteal phase of the menstrual cycle is also called the secretory phase. Give reason.

(i) During the luteal phase, the hormone progesterone is secreted by the corpus luteum, which develops from the ruptured graffian follicles.

(ii) Its level increases. If menstrual bleeding occurs, the level will decrease.

14. Why are family planning methods not adopted by all the people of our country?

(i) Family planning is a way of living that is adopted voluntarily by couples on the basis of knowledge and responsible decisions to promote the health and welfare of the family group and society.

(ii) The WHO (World Health Organisation) has also stressed the importance of family planning as global health strategy for all.

(iii) Further many families especially in the lower strata of society believe that many children in a family can contribute to more income and do not adopt family planning.

1. With a neat labelled diagram describe the parts of a typical angiospermic ovule.

(i) The main part of the ovule is the nucellus which is enclosed by two integuments leaving an opening called as micropyle. 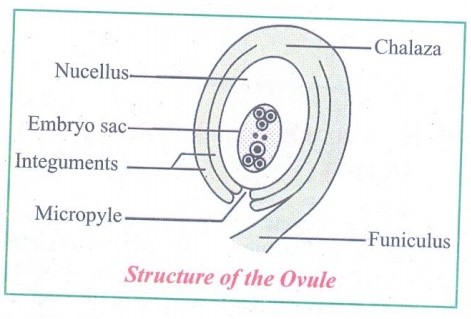 (ii) The ovule is attached to the ovary wall by a stalk known as funiculus. Chalaza is the basal part.

(v) The remaining two nuclei are called polar nuclei found in the centre. In the egg apparatus one is the egg cell (female gamete) and the remaining two cells are the synergids.

2. What are the phases of menstrual cycle? Indicate the changes in the ovary and uterus.

Events of menstrual cycle and the role of hormones. 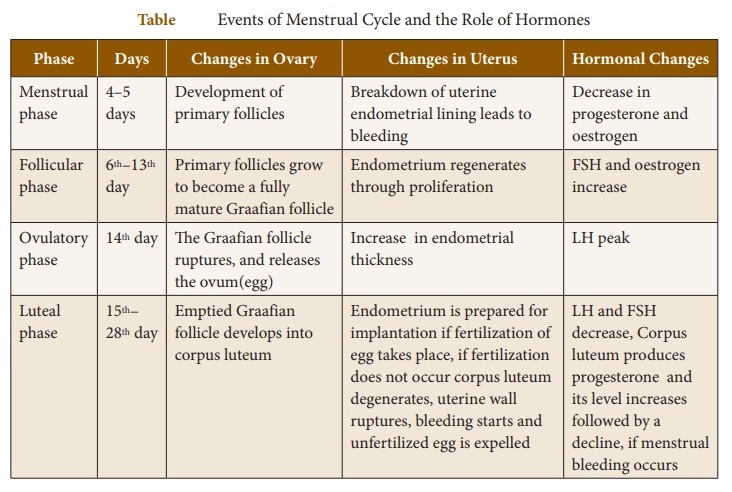 1. In angiosperms the pollen germinates to produce pollen tube that carries two gametes. What is the purpose of carrying two gametes when single gamete can fertilize the egg?

(i) The second gamete fuses with diploid secondary nucleus in the embryo sac of the ovule.

(ii) This forms the triploid endosperm nucleus which develops into the endosperm tissue and gives nourishment to the developing embryo.

(iii) When the ovule forms the seed after fertilization the endosperm serves to give nourishment to the embryo during germination until the first set of foliage leaves are formed by the seedling or baby plant.

2. Why menstrual cycle does not take place before puberty and during pregnancy ?

(ii) Pregnancy is initiated by fertilization and zygote formation. The zygote gets implanted in the uterus. The ruptured follice develops into a temporary endocrine gland called corpus luteum to produce hormones. Uterine wall is thickened to receive the zygote.

If fertilization does not take place, corpus luteum degenerates, uterine wall ruptures and unfertilized egg is expelled resulting in menstruation. Hence menstrual cycle does not occur during pregnancy.

3. Read the following passage and answer the questions that follow

Rahini and her parents were watching a television programme. An advertisement flashed on the screen which was promoting use of sanitary napkins. Rahini’s parents suddenly changed the channel, but she objected to her parents and explained the need and importance of such advertisement.

a) What is first menstruation called? When does it occur ?

b) List out the napkin hygiene measures taken during menstruation ?

c) Do you think that Rahini’s objection towards her parents was correct? If so, Why?

(b) Napkin hygiene:    The parents and teachers are to create awareness among the school girls about the use of napkins and their proper disposal. Girls should be educated in the following ways :

i. The sanitary pad and tampons should be wrapped properly and discarded because they can spread infections.

ii. Sanitary pad or tampon should not be flushed down the toilet.

iii. Napkin incinerators are to be used properly for disposal of used napkins. 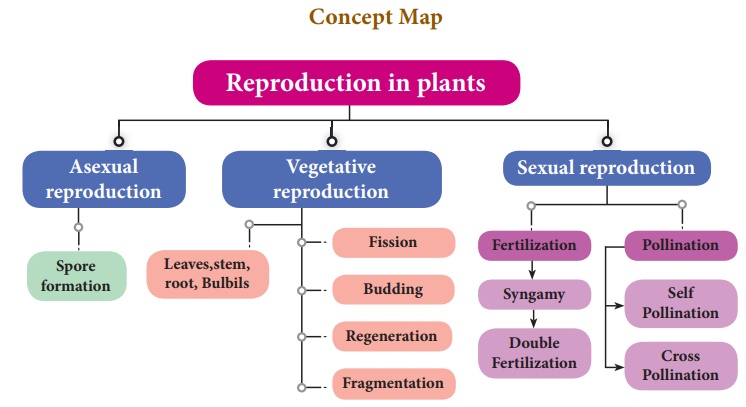 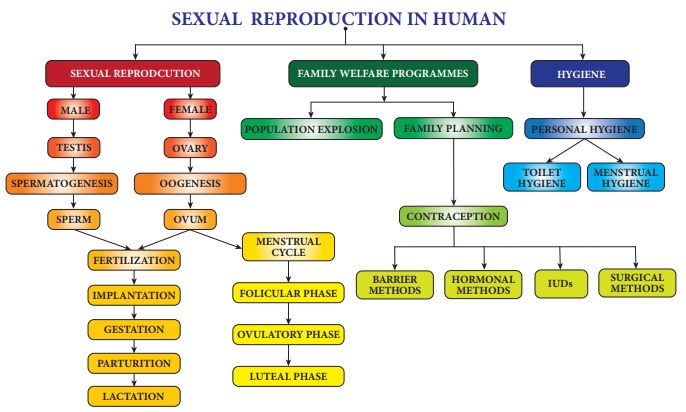