1. When a sound wave travels through air, the air particles

a) vibrate along the direction of the wave motion

b) vibrate but not in any fixed direction

c) vibrate perpendicular to the direction of the wave motion

d) do not vibrate

3. The frequency, which is audible to the human ear is

4. The velocity of sound in air at a particular temperature is 330 m s–1. What will be its value when temperature is doubled and the pressure is halved?

6. The sound waves are reflected from an obstacle into the same medium from which they were incident. Which of the following changes?

7. Velocity of sound in the atmosphere of a planet is 500 m s–1. The minimum distance between the sources of sound and the obstacle to hear the echo, should be

II. Fill up the blanks

1. Rapid back and forth motion of a particle about its mean position is called Vibration

2. If the energy in a longitudinal wave travels from south to north, the particles of the medium would be vibrating in both north and south

4. A source of sound is travelling with a velocity 40 km/h towards an observer and emits a sound of frequency 2000 Hz. If the velocity of sound is 1220 km/h, then the apparent frequency heard by the observer is 2068 Hz.

III. True or false:- (If false give the reason)

1. Sound can travel through solids, gases, liquids and even vacuum. - False

3. The velocity of sound is independent of temperature. - False

The velocity of sound is dependent of temperature.

4. The Velocity of sound is high in gases than liquids. - False

The velocity of sound is high in liquids than gases.

Mark the correct choice as

c. Assertion is true, but the reason is false.

d. Assertion is false, but the reason is true.

1) Assertion: The change in air pressure affects the speed of sound.

Reason: The speed of sound in a gas is proportional to the square of the pressure

Answer: c. Assertion is true, but the reason is false.

2) Assertion: Sound travels faster in solids than in gases.

Reason: Solid posses a greater density than that of gases.

1. What is a longitudinal wave?

It is a wave in which particles are vibrating along the direction of wave motion.

2. What is the audible range of frequency?

3. What is the minimum distance needed for an echo?

The minimum distance needed for an echo 17.2 m.

1. Why does sound travel faster on a rainy day than on a dry day?

During rainy days, the humidity is more in the atmosphere. The speed of the sound generally increases with humidity and speed of sound in water is more than 4X then speed in air. So sound travels faster on a rainy day

2. Why does an empty vessel produce more sound than a filled one?

Velocity of sound in gas at 0° C

4. Explain why, the ceilings of concert halls are curved.

They are made curved so that the sound after reflecting from the ceiling reaches every corner of the concert hall and the audience listen the sound clearly.

5. Mention two cases in which there is no Doppler effect in sound?

(ii) When S and L move in such a way that distance between them remains constant.

(iii) When source S and L are moving in mutually perpendicular directions.

2. The thunder of cloud is heard 9.8 seconds later than the flash of lightning. If the speed of sound in air is 330 m s–1, what will be the height of the cloud?

3. A person who is sitting at a distance of 400 m from a source of sound is listening to a sound of 600 Hz. Find the time period between successive compressions from the source?

4. An ultrasonic wave is sent from a ship towards the bottom of the sea. It is found that the time interval between the transmission and reception of the wave is 1.6 seconds. What is the depth of the sea, if the velocity of sound in the seawater is 1400 m s–1?

Time interval between sending and receiving of the wave, t = 1.6 s

5. A man is standing between two vertical walls 680 m apart. He claps his hands and hears two distinct echoes after 0.9 seconds and 1.1 second respectively. What is the speed of sound in the air?

6. Two observers are stationed in two boats 4.5 km apart. A sound signal sent by one, under water, reaches the other after 3 seconds. What is the speed of sound in the water?

Speed of sound in water,

7. A strong sound signal is sent from a ship towards the bottom of the sea. It is received back after 1s.What is the depth of sea given that the speed of sound in water 1450 m s–1?

Time taken by the signal to reach the bottom of the sea,

Depth of the sea (or) distance travelled by signal, (d)

1. What are the factors that affect the speed of sound in gases?

(iii) Effect of relative humidity: When humidity increases, the speed of sound increases. That is why we can hear sound from long distances clearly during rainy seasons.

2. What is mean by reflection of sound? Explain:

a) reflection at the boundary of a rarer medium

b) reflection at the boundary of a denser medium

When sound waves travel in a given medium and strike the surface of another medium, it can be bounced back into the first medium is called as reflection.

a) Reflection in rarer medium :

(i) Consider a wave travelling in a solid medium striking on the interface between the solid and the air.

(ii) The compression exerts a force F on the surface of the rarer medium.

(iii) As a rarer medium has smaller resistance for any deformation, the surface of separation is pushed backwards (Figure).

(iv) As the particles of the rarer medium are free to move, a rarefaction is produced at the interface.

b) Reflection in denser medium :

(i) A longitudinal wave travels in a medium in the form of compressions and rare factions.

(iii) In turn, the wall exerts an equal and opposite reaction R = - F on the air molecules. This results in a compression near the rigid wall.

(i) When sound waves are reflected from curved surfaces, the intensity of reflected waves is changed.

(ii) When reflected from a convex surface, the reflected waves are diverged out and the intensity is decreased.

(iv) Parabolic surfaces are used when it is required to focus the sound at a particular point.

(v) Hence, many halls are designed with parabolic reflecting surfaces.

(vi) In elliptical surfaces, sound from one focus will always be reflected to the other focus, no matter where it strikes the wall.

3. a) What do you understand by the term ‘ultrasonic vibration’?

a) Ultrasonic vibrations: These are high- frequency sound waves beyond the range of human hearing. The frequency, for these sound waves, is greater than 20 kHz.

(i) To kill micro organisms.

(ii) To find direction and range of submarines.

a) State two conditions necessary for hearing an echo.

b) What are the medical applications of echo?

c) How can you calculate the speed of sound using echo?

a) An echo is the sound reproduced due to the reflection of original sound from various rigid surfaces such as walls, ceilings, surfaces of mountains, etc.

Conditions necessary for hearing an echo:

(i) Thus, the minimum time gap between the original sound and echo must be 0.1s.

(ii) The minimum distance required to hear an echo is 17.2 m.

b) The medical applications of echo:

The principle of echo is used in obstetric ultrasonography, which is used to create real-time visual images of the developing embryo or fetus in the mother’s uterus.

(i) The sound pulse emitted by the source travels a total distance of 2d while traveling from the source to the wall and then back to the receiver.

(ii) The time taken for this has been observed to be “t”. Hence, the speed of sound wave is given by

1. Suppose that a sound wave and a light wave have the same frequency, then which one has a longer wavelength?

2. When sound is reflected from a distant object, an echo is produced. Let the distance between the reflecting surface and the source of sound remain the same. Do you hear an echo sound on a hotter day? Justify your answer.

(i) An echo can only be heard if it reaches the ear after 0.1s. Time taken = Total distance / Velocity.

(ii) If the temperature rises (i.e. on a hotter day), the velocity of sound will increase. This in turn will increase the required for hearing an echo. As The distance does not increase between the source and reflecting body, no echo is heard. 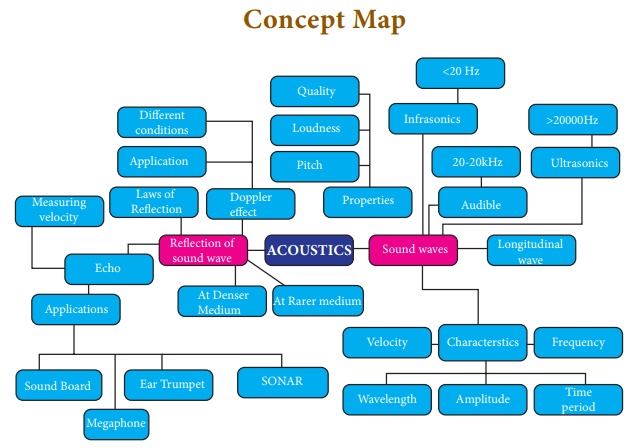