2. NaCl is insoluble in carbon tetrachloride but soluble in water. Give reason.

3. Explain Octet rule with an example.

Answer: The tendency of atoms to have eight electrons in the valence shell is known as the ‘Octet rule’ or the ‘Rule of eight’ 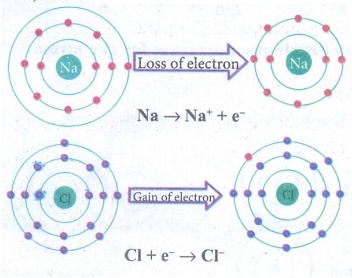 4. Write a note on different types on bonds.

Answer: There are different types of chemical bonding possible between atoms which make the molecules. Depending on the type of bond they show different characteristics or properties.

(b) Covalent compounds conduct electricity in molten or solution state.

(b) Ionic compounds conducts electricity in molten or solution state.

6. Complete the table give below. 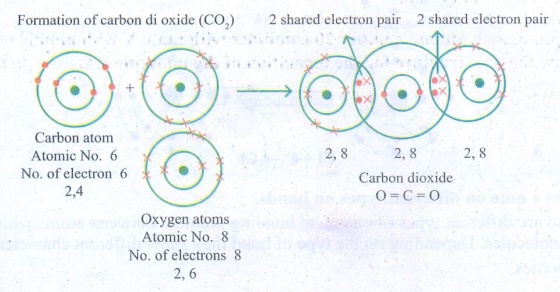 8. Fill in the following table according to the type of bonds formed in the given molecule.

9. The property which is characteristics of an Ionic compound is that

(a) it often exists as gas at room temperature.

(b) it is hard and brittle.

(d) it has low melting point.

Answer: (b) it is hard and brittle

10. Identify the following reactions as oxidation or reduction.

11. Identify the compounds as Ionic/Covalent/Coordinate based on the given characteristics.

(a) Soluble in non polar solvents

13. Considering MgCl2 as ionic compound and CH4 as covalent compound give any two differences between these two compounds.

1. It is formed by the transfer of electrons (2e −) from a metal magnesium (Mg) to a non - metal atom chlorine (CI)

1. It is formed by sharing of electrons between the non-metal atoms carbon and hydrogen

14. Why are Noble gases inert in nature?

Answer: Noble gases have stable valence electronic configuration. So noble gas atoms neither have any tendency to gain nor lose electrons and their valency is zero. Thus they are said to be inert.

1. List down the differences between Ionic and Covalent compounds. 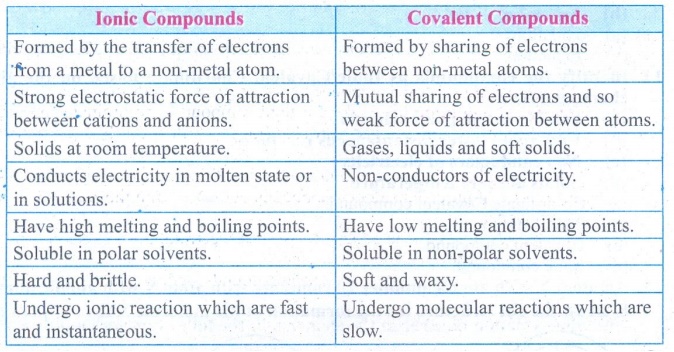 • Formed by the transfer of electrons from a metal to a non-metal atom.

• Strong electrostatic force of attraction between cations and anions.

• Conducts electricity in molten state or in solutions.

• Have high melting and boiling points.

• Undergo ionic reaction which are fast and instantaneous.

• Formed by sharing of electrons between non-metal atoms.

• Mutual sharing of electrons and so weak force of attraction between atoms.

• Have low melting and boiling points.

• Undergo molecular reactions which are slow.

2. Give an example for each of the following statements.

(a) A compound in which two Covalent bonds are formed.

(b) A compound in which one ionic bond is formed.

(c) A compound in which two Covalent and one Coordinate bonds are formed.

(d) A compound in which three covalent bonds are formed.

(e) A compound in which coordinate bond is formed.

3. Identify the incorrect statement and correct them.

(a) Like covalent compounds, coordinate compounds also contain charged particles (ions). So they are good conductors of electricity.

(b) Ionic bond is a weak bond when compared to Hydrogen bond.

(c) Ionic or electrovalent bonds are formed by mutual sharing of electrons between atoms.

(e) The electrons which are not involved in bonding are called valence electrons.

(a) Incorrect statement. Like covalent compounds, co-ordinate compounds also do not contain charged particles (ions), so they are bad conductors of electricity.

(b) Incorrect statement. Ionic bond is a strong bond when compared to hydrogen bond.

(e) Incorrect statement. The electrons which are not involved in bonding are called lone pair of electrons.

4. Discuss in brief about the properties of coordinate covalent compounds.

(a) Physical state - These compounds exist as gases, liquids or solids.

(b) Electrical conductivity - Like covalent compounds, co-ordinate compounds also do not contain charged particles (ions), so they are bad conductors of electricity.

5. Find the oxidation number of the elements in the following compounds.