1. Name an element which has the same number of electrons in its first and second shell.

2. Write the electronic configuration of K and CI

3. Write down the names of the particles represented by the following symbols and explain the meaning of superscript and subscript numbers attached. 1H1, 0n1, -1e0

4. For an atom ‘X’, K, L and M shells are completely filled. How many electrons will be present in it?

5. What is the same about the electron structures of:

a. Lithium, Sodium and Potassium.

b. Beryllium, Magnesium and Calcium.

a. Lithium, sodium & potassium have 1 electron in their outermost shell.

b. Beryllium, magnesium and calcium have 2 electrons in their outermost shell.

1. How was it shown that atom has empty space?

2. Why do 3517Cl and 3717Cl have the same chemical properties? In what respect do these atoms differ?

Answer:  3517Cl, 3717Cl have same chemical properties because they have same number of electrons but their atoms differ in the number of neutrons.

3. Draw the structure of oxygen and sulphur atoms.

4. Calculate the number of neutrons, protons and electrons :

(i) atomic number 3 and mass number 7

(i) atomic number 3 and mass number 7

Mass number = No. of protons + No. of neutrons

5. What are nucleons? How many nucleons are present in Phosphorous? Draw its structure. 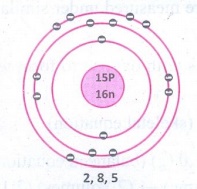 1. What conclusions were made from the observations of Gold foil experiment?

(i) Atom has very small nucleus at the centre.

(ii) There is large empty space around the nucleus.

(iii) Entire mass of an atom is concentrated in a very small positively charged region which is called the nucleus.

(iv) Electrons are distributed in the vacant space around the nucleus.

(v) The electrons move in circular paths around the nucleus.

The main postulates are:

(i) In atoms, the electron revolve around the nucleus in stationary circular paths called orbits or shells or energy levels.

(ii) While revolving around the nucleus in an orbit, an electron neither loses nor gains energy.

(iii) An electron in a shell can move to a higher or lower energy shell by absorbing or releasing a fixed amount of energy. 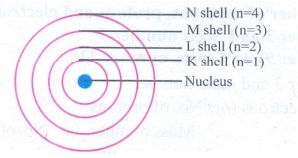 Energy levels around the nucleus of an atom : Bohr’s model.

The orbit closest to the nucleus is the K shell. It has the least amount of energy and the electrons present in it are called K electrons, and so on with the successive shells and their electrons. These orbits, are associated with fixed amount of energy, so Bohr called them as energy level or energy shells.

3. State the Gay Lussac’s law of combining volumes, explain with an illustration.

Whenever gases react together, the volumes of the reacting gases bear a simple ratio, and the ratio is extended to the product when the product is also in gaseous state, provided all the volumes are measured under similar conditions of temperature and pressure.

This law may be illustrated by the following example.

The ratio of volume which gases bears is 2:1:2 which is a simple whole number ratio.

Assign the valency for Phosphorus, Chlorine, Silicon and Argon

Draw the structures of the isotopes of oxygen O16 and O18. Atomic number of oxygen = 8. 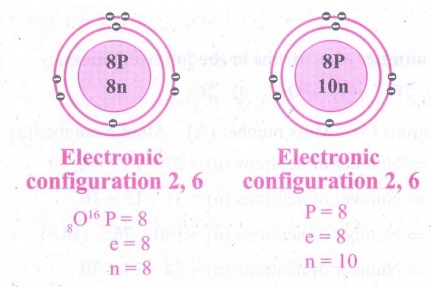 Draw the model of the following pairs of isotones: 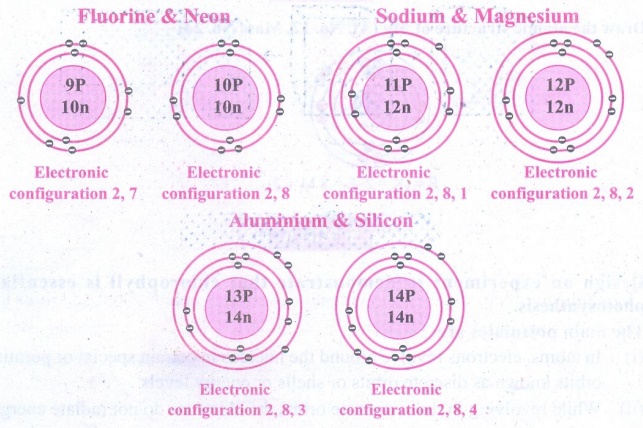 1 volume of nitrogen reacts with 3 volumes of hydrogen to form 2 volumes of ammonia gas. The ratio by volume which gases bear is 1 : 3 : 2.Which is a simple while number ratio.

1. Calculate the number of neutrons in the following atoms: