1. Differentiate between absorption and adsorption.

1. Absorption is the process in which the substance is dissolved throughout the bulk of another substance.

2. For example a paper (absorbent) soaks up or absorbs water.

1. Adsorption is the process in which particles of a substance, (it could be gas, liquid or dissolved solid) adhere to a surface of another substance.

Answer: Some solids changes directly to vapours on heating. This is called sublimation.

3. A few drops of ‘Dettol’ when added to water the mixture turns turbid. Why?

Answer: The Dettol formulation is a stabilised micro-emulsion. It is manufactured using Chloroxylenol 4.8% and the rest made up by pine oil, isopropanol, castor oil, and soap. On dilution with water, the micro-emulsion destabilises releasing the pine oil and castor oil as a visible bloom. That is why the mixture turns turbid.

5. Name the components in each of the following mixtures,

(i) Ice cream, is a mixture of cream, milk, sugar & sometimes egg.

(ii) Lemonade is a mixture of lemon juice, sugar and water.

(iii) Air is a mixture of nitrogen, oxygen, carbon dioxide, water vapour and other gases.

(iv) Soil is a mixture of clay, sand and various salts.

1. Which of the following are pure substances? Ice, Milk, Iron, Hydrochloric acid, Mercury, Brick and Water.

2. Oxygen is very essential for us to live. It forms 21% of air by volume. Is it an element or compound?

Answer: Oxygen is an element.

3. You have just won a medal made of 22-carat gold. Have you just procured a pure substance or impure substance?

Answer: lt is a mixture - so it is impure substance.

4. How will you separate a mixture containing saw dust, naphthalene and iron filings?

Answer: The iron filings in the mixture can be separated by Magnetic separation and Naphthalene by sublimation. Saw dust will be remaining at the bottom.

5. How are homogenous solutions different from heterogeneous solution? Explain with examples.

(i) Components are uniformly mixed and it will have single phase,

(ii) No boundaries of separation between the components. Has single phase.

(iii) Components are not visible to naked eye.

(iv) They will be in solid, liquid or in the gaseous phase.

(i) Components are not uniformly mixed and it will have more than single phase. They are called suspensions. Eg: chalk in water, petrol in water, sand in water, etc.

(ii) There are visible boundaries between the components. Have two or more distinct phases.

1. Write the differences between elements and compounds and give an example for each.

(i) Made up of only one kind of atom.

(ii) The smallest particle that retains all its properties is an atom.

(iii) Cannot be broken down into simpler substances,

(i) Made up of more than one kind of atom

(ii) The smallest particle that retains all its properties is the molecule.

(iii) Can be broken down into elements by chemical methods

Brownian movement is a kinetic property. When colloidal solution are viewed under powerful microscope, it can be seen that colloidal particles are moving constantly and rapidly in zig-zag directions. 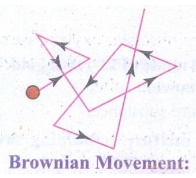 The Brownian movement of colloidal particles is due to the unbalanced bombardment of the particles by the molecules of dispersion medium.

(i) Tyndall (1869) observed that when a strong beam of light is focused on a colloidal solution, the path of the beam becomes visible.

(ii) This phenomenon is known as Tyndall effect and the illuminated path is called Tyndall cone.

(iii) This phenomenon is not observed in case of true solution.

(iv) This phenomenon is due to scattering of light by colloidal particles.

3. How is a mixture of common salt, oil and water separated? You can use a combination of different methods.

(i) The mixture is taken in a separating funnel., whose mouth is kept closed.

(iii) As common salt can dissolve in water it settles as a separate layer at the bottom of oil layer in the separating funnel.

(iv) Place a beaker below the funnel to collect salt solution.

(v) Open the tap. Allow the salt solution alone to collect in the beaker.

(vi) From the salt solution, common salt is obtained from evaporation. 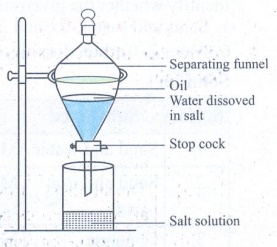 1. Is air a pure substance or Mixture? Justify

2. You must have seen brass statues in museums and places of worship. Brass is an alloy made up of approx. 30% zinc and 70% copper. Is Brass a pure substance or a mixture or compound?

Reason: Air contains nitrogen, oxygen, carbon dioxide, dust particles, water vapour. The composition of air is not the same at all the places.

2. Brass is a mixture of solid in solid.

Take some powdered iron filings and mix it with sulphur.

i. Divide the mixture into two equal halves.

iii. On heating you will get a black brittle compound.

(i) When Iron fillings and sulphur are mixed both retain their properties it means they have not undergone any chemical reaction.

(ii) When Iron fillings and sulphur are mixed and heated, they undergo a chemical reaction and form Iron sulphide

Identify whether the given substance is mixture or compound and justify your answer.

1. Sand and water- Mixture - No chemical alteration of two components.

2. Sand and iron filings - Mixture - Sand (silicon and oxygen) is a compound, but sand with iron filings form a mixture.

3. Concrete - Mixture - Concrete is a mixture of lime, cement, water, sand and other rocks.

4. Water and oil- Mixture - Water is a compound, but when water is mixed with oil, it forms a heterogeneous mixture.

5. Salad- Mixture - salad consist of two or more substances mixed together without any chemical bond.

8. Cement-Mixture - Cement is a mixture of many compounds.

9. Alcohol - Compound - It is an organic compound in which one hydroxyl group is bound to a saturated / unsaturated carbon atom.

Add one tea spoon full of each one to a glass of water and stir well. Leave it aside for about ten minutes. What do you observe? 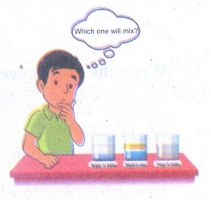 Answer: When one teaspoon full of sugar, starch and wheat flour are added to a glass of water, sugar dissolves in water but wheat flour does not. If we leave it aside for about 10 minutes, wheat flour settles at the bottom

1. Why whole milk is white?

Answer: Milk is white because it reflects all wavelengths of visible light. The mixture of reflected colors produces white light. The reason for this is due to the chemical composition of milk and the size of the particles contained within it.

Answer: The ocean looks blue because red, orange and yellow (long wavelength light) are absorbed more strongly by water than is blue (short wavelength light). So when white light from the sun enters the ocean, it is mostly the blue that gets returned. Same reason the sky is blue.

3. Why sun looks yellow when it is really not?

Answer: Our sun is actually white (mixture of all wavelength of visible spectrum) if we see it from outer space or high-altitude airplanes. Our atmosphere scatters shorter to bigger wavelengths color from sunlight when the white light travels through it. During day, it scatters violet and blue colours leaving yellowish sunlight (the reason why sky is blue and sunlight is yellow). During morning and evening, the sun appears reddish because light rays needs to travel longer distance in atmosphere which causes scattering of yellow light too.