1. Through which medium sound travels faster, iron or water? Give reason.

Reason: The speed of sound depends on the nature of medium. As Iron is a solid, sound travels faster through iron than Water.

2. Name the physical quantity whose SI unit is ‘hertz’. Define.

3. What is meant by supersonic speed?

4. How does the sound produced by a vibrating object in a medium reach your ears?

Answer: 1.When an object vibrates, it sets the particles of the medium around it vibrating.

2. The vibrating particles in the medium displace from the equilibrium position and exerts pressure on adjacent particles.

3. Thus this process continues in the medium till the sound reaches our ear.

5. You and your friend are on the moon. Will you be able to hear any sound produced by your friend?

Answer: We cannot hear any sound on the moon.

Reason: Absence of atmosphere (medium) in the moon.

1. Describe with diagram, how compressions and rarefactions are produced.

When the vibrating body moves backward, it creates a region of low pressure (i.e) low density of particles. This is called rarefaction. Rarefactions are the regions where particles are spread apart.

2. Arrange them on a table near wall.

3. Keep a clock near the open end of one pipe and hear the sound of the clock through the other pipe. 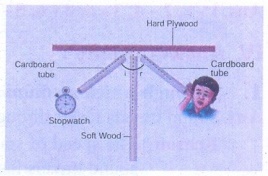 4. Adjust the pipe till the sound of the clock heard with more clarity.

5. Now measure the angle of incidence and reflection and see the relationship between the angles.

7. Direction of incident sound, direction of the reflected and the normal are in the same plane.

8. Thus laws of reflection of sound are verified.

Minute foreign particles can be removed from objects placed in a liquid bath by ultrasonic sound waves.

To detect cracks and flaws in metal blocks

Ultrasonic waves are made to reflect from various parts of the heart and form the image of the heart.

To break small stones formed in the kidney into fine grains, which is flushed out with urine.

4. Explain how does SONAR work.

SONAR is the abbreviation for Sound Navigation And Ranging.

(i) SONAR consists of a transmitter and a detector and they are installed at the bottom of boats and ships.

(ii) The Transmitter produces and transmits the ultrasonic waves to travel through water.

(iii) The detector senses the ultrasonic waves that reflected back after striking the object.

(iv) It converts ultrasonic waves into electrical signals which can be interpreted.

(v) By knowing the speed of sound in water (v) and time interval (t) between transmission and reception of ultrasonic sound, the distance of the object can be calculated by, 2d = v × t

(vi) This method is called echo-ranging.

1. The frequency of a source of sound is 600 Hz. Calculate the number of times it vibrates in a minute?

Frequency = Number of vibrations in a second.

Frequency in a minute = Frequency per second × 60

Initial velocity of stone, u =0 (stone at rest)

Take a tuning fork and strike its prongs on a rubber pad. Bring it near your ear. Do you hear any sound? Now touch the tuning fork with your finger. What do you feel? Do you feel vibrations?

Aim: To demonstrate the vibration of a molecule.

1 .Take a tuning fork and strike its prongs on a rubber pad.

2. Bring it near your ear. Hear the sound.

3. Touch the tuning fork with finger.

4. Try to feel the vibrations.

When we strike the tuning fork on the rubber pad, it starts vibrating. The vibrations can be felt.

Tuning fork vibrates the molecules which will vibrate the nearby molecules.

Take a coil or spring and move it forward and backward. What do you observe? You can observe that in some parts of the coil the turns will be closer and in some other parts the turns will be far apart. Sound also travels in a medium in the same manner. We will study about this now.

Aim: To demonstrate the propagation of Longitudinal wave. (Sound)

1. Take a coil or spring

2. Move it forward and backward.

1. Some parts of the coil, the turns are closer.

2. In other parts, the turns are far apart.

Listen to the audio of any muscial instruments like flute, nathaswaram, tabla, drums, veena etc., Tabulate the differences between the sounds produced by the various sources.

Aim: To compare the sounds of musical instruments.

1. Hear the instrumental music of flute, drums and veena.

2. Tabulate the difference between the sounds.

Sounds in the different music instruments are characterised by the following qualities such as.