1. According to cartesian sign convention, which mirror and which lens has negative focal length?

2. Name the mirror(s) that can give (i) an erect and enlarged image, (ii) same sized, inverted image.

3. If an object is placed at the focus of a concave mirror, where is the image formed?

4. Why does a ray of light bend when it travels from one medium to another?

Answer: A ray of light bend when it travels from one medium to another due to the change in velocity of light in two different medium.

5. What is the speed of light in vacuum?

6. Concave mirrors are used by dentists to examine teeth. Why?

Answer: As concave mirror produces virtual, erect and magnified images when an object is placed in between focus and pole. So he can clearly gets a magnified view of cavities.

1. a) Complete the diagram to show how a convave mirror forms the image of the object.

b. What is the nature of the image? 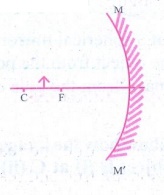 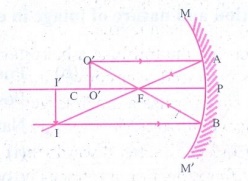 b) Real, inverted and magnified.

2. Pick out the concave and convex mirrors from the following and tabulate them. Rear-view mirror, Dentist’s mirror, Torch-light mirror, Mirrors in shopping malls, Make-up mirror.

3. State the direction of incident ray which after reflection from a spherical mirror retraces its path. Give reason for your answer.

Answer: Incident ray is directed towards the centre of curvature

Reason: The ray is normal to the spherical mirror, so ∠i =0, ∠r=0

4. What is meant by magnification? Write its expression. What is its sign for real image and virtual image?

Answer: Magnification is the increase in size of an image compared to true size.

5. Write the spherical mirror formula and explain the meaning of each symbol used in it.

u - distance of the object from the pole of the mirror

v - distance of image from the pole of the mirror

1. a) Draw ray diagrams to show how the image is formed using a concave mirror, when the position of object is (i) at C (ii) between C and F (iii) between F and P of the mirror.

b) Mention the position and nature of image in each case. 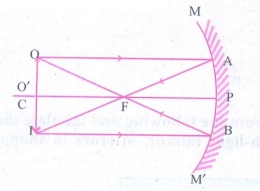 (b) Position of object: At C

Position of the image: At C

Nature of the image:

(ii) Object between C and F 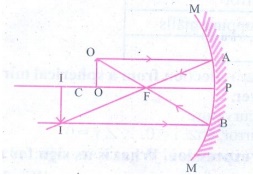 Position of object : Between C and F

Position of the image : Beyond C

Nature of the image :

(iii) Object between F and P of the mirror 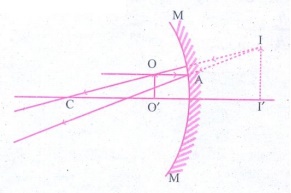 Position of object : Between F and P

Position of the image : Behind the Mirror

Nature of the image :

2. Explain with diagrams how refraction of incident light takes place from a) rarer to denser medium b) denser to rarer medium c) normal to the surface separating the two media.

a) rarer to denser medium

When a ray of light travels from optically rarer medium to optically denser medium, it bends towards the normal.

b) denser to rarer medium

c) normal to the surface separating the two media.

A ray of light incident normally on a denser medium it goes without any deviation. 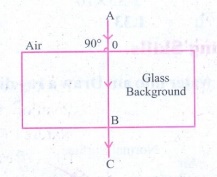 1. A concave mirror produces three times magnified real image of an object placed at 7 cm in front of it. Where is the image located?

The image will be formed at a distance of 21 cm in front of concave mirror from its pole.

2. Light enters from air into a glass plate having refractive index 1.5. What is the speed of light in glass?

1. Light ray emerges from water into air. Draw a ray diagram indicating the change in its path in water. 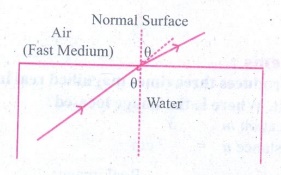 2. When a ray of light passes from air into glass, is the angle of refraction greater than or less than the angle of incidence?

Light bends towards the normal because glass is denser than air.

It bends towards normal, since light has to travel with lesser speed in glass but within short time.

r < i. Angle of refraction is less than the angle of incidence.

3. What do you conclude about the speed of light in diamond, if the refractive index of diamond is 2.41?

Stand before the mirror in your dressing table or the mirror fixed in a steel almirah. Do you see your whole body? To see your entire body in a mirror, the mirror should be atleast half of your height. Height of the mirror = Your height/2.

Hold a concave mirror in your hand (or place it in a stand). Direct its reflecting surface towards the sun. Direct the light reflected by the mirror onto a sheet of paper held not very far from the mirror. Move the sheet of paper back and forth gradually until you find a bright, sharp spot of light on the paper. Position the mirror and the paper at the same location for few moments. What do you observe? Why does the paper catches fire?

A concave mirror converges all the light rays coming from the Sun. All these light rays converge and meet at the focus of the mirror.

So, all the heat and light is focused at the principal focus (F). When a paper is kept at the focus (F), it starts burning, as this point is very hot.

Take a convex mirror. Hold it in one hand. Hold a pencil close to the mirror in the upright position in the other hand. Observe the image of the pencil in the mirror. Is the image erect or inverted? Is it diminished or enlarged? Move the pencil slowly away from the mirror. Does the image become smaller or larger? What do you observe?

(i) When a pencil is hold in the upright position in front of a convex mirror, its diminished, erect image is formed which is virtual and therefore seen in the convex mirror.

(ii) When the pencil is moved away from the convex mirror size of image becomes smaller and smaller but image remains erect.

(iii) As we move away, the object from the convex mirror, image shifts towards the focus.

Put a straight pencil into a tank of water or beaker of water at an angle of 45° and look at it from one side and above. How does the pencil look now? The pencil appears to be bent at the surface of water.