21. Name the different types of movement

22. Name the filaments present in the sarcomere

23. Name the contractile proteins present in the skeletal muscle

24. When describing a skeletal muscle, what does “striated” mean?

• The striations in the skeletal muscle mean's the dark a band s and the light I band.

25. How does an isotonic contraction take place?

• In isotonic contraction the length of the muscle changes but the tension remains constant.

26. How does an isometric contraction take place?

• In isometric contraction the length of the muscle does not change but the tension of the muscle changes, (eg) Pushing againsta wall holding a heavy bag.

• The cranial bones are 8 in numbers.

28. Which is the only jointless bone in human body?

• The joint less bone is hyoid bone in our throat. The hyoid bone (lingual bone) is a horse shoe shaped bone situated in the anterior mid line of the neck between the chin and the thyroid cartilage.

29. List the three main parts of the axial skeleton

• Due to the deficiency of parathyroid hormone the level of calcium decreases in the blood that leads to rapid muscle spasm called tetany.

31. How is rigor mortis happened?

• After the death of an individual the muscle be in a contractile position due to the depletion of ATP that is digested by lysosomal enzyme called rigor mortis.

32. What are the different types of rib bones that form the rib cage?

33. What are the bones that make the pelvic girdle?

• Sliding filament theory is a active process. It is proposed by Andrw F. Huxley in 1954 and Rolf Niedergerke. 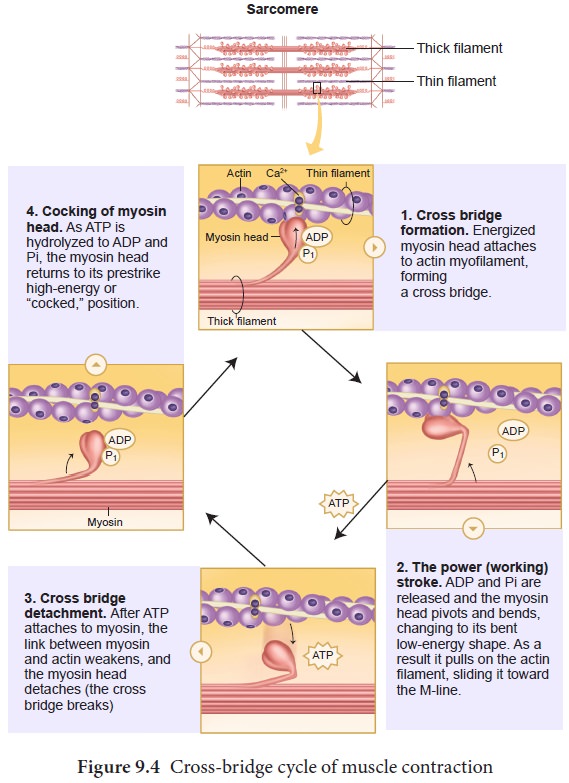 • When the nerve impulse reaches a neuromuscular junction acetylcholine is released and created action potential.

• This action potential triggers the release of calcium from sarcoplasmic reticulum

• The released calcium ions binds to troponin on thin filaments.

• The active sites are exposed to the heads of myosin to form a cross bridge. Hence actin and myosin form a protein complex called actomyosin.

• Utilizing the energy released from hydrolysis of ATP the myosin head rotates until it forms a 90° angle with long axis of the filament.

• The power stroke begins after the myosin head and hinge region tilt from a 90° angle to 45° angle.

• When the myosin head swells it pulls the attached actin filament towards the centre of the A - band.

• The myosin returns back to its relaxed state and releases ADP and phosphate ion. A New ATP molecule binds to the head of myosin and the cross bridge is broken.

• At the end of each power stroke each myosin head detaches from actin then swivels back and binds to a new actin molecule to start another contraction cycle.

• The power stroke repeats many times and the thin filaments move toward the centre of the sarcomere.

• In this process there is no change in the lengths of thick or thin filaments.

• The Z - discs attached to the actin filaments are also pulled inwards from both the sides causing the shortening of the sarcomere. This process continues.

• When motor impulse stops the calcium ions are pumbed back into the sarcoplasmic reticulum results in the masking of the active sites of the actin filament and the myosin head fails to bind with the actin and causes Z - discs back to their original relaxed position.

36. What are the benefits of regular exercise?

• The muscles used in exercise grow larger and stronger.

• The resting heart rate goes down.

• More enzymes are synthesized in the muscle fibre.

• Over all well- being with good quality of life.

37. What are the different types of bone fracture?

These are the common types of fractures. 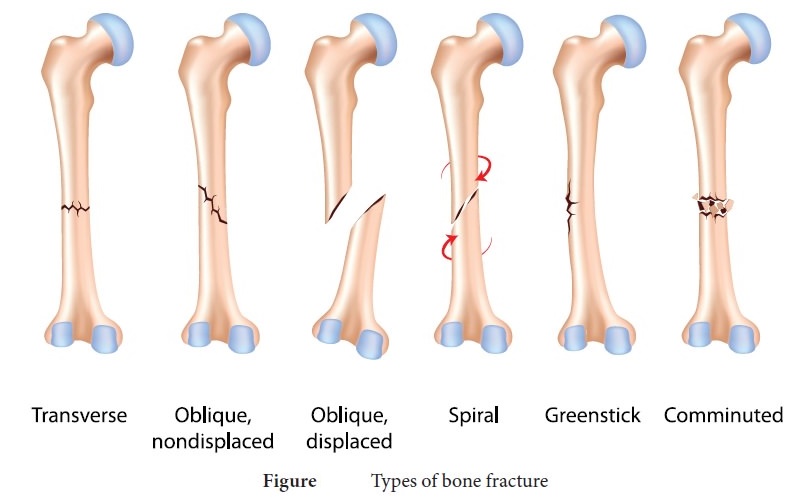 • Tranverse - A fracture that is at right angle to the bone's long axis.

• Oblique non-displaced- A fracture that is diagonal to the bone's long axis and the fractured bone is not displaced from its position.

• Oblique displaced - A fracture that is diagonal to the bone's long axis and the fractured bone is displaced from its position.

• Greenstick - Bone breaks incompletely, just like a green twig breaks. It is common in children, because of the flexibility of the bones.

• Comminuted - Bone fragmented into three or more pieces. Particularly common in the aged, whose bones are brittle (hard but easily broken).

38. Write about the mechanism and healing of bone fracture.

Mechanism and healing of a bone fracture

• Bone is a cellular, living tissue capable of growth, self-repair and remodeling in response to physical stresses. In the adult skeleton, bone deposit and bone resorption occur. These two processes together constitute in remodeling of bone. There are four major stages in repairing a simple fracture. 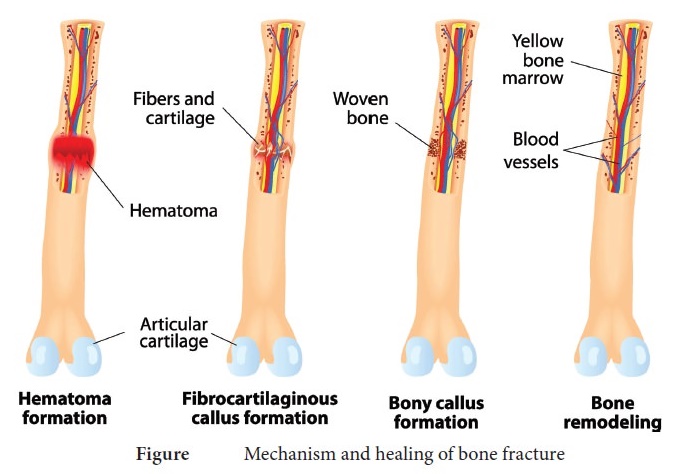 Mechanism and healing of bone fracture

• When a bone breaks the blood vessels in the bone and surrounding tissues are torn and results in haemorrhage.

• Due to this a haematoma, a mass of clotted blood forms at the fracture site.

• The tissues at the site becomes swollen, painful and inflammed.

• The death of bone cells, occur due to lack of nutrition.

• Within a few days several events lead to the formation of soft granulation tissue called callus.

• Capillaries grow into the haematoma and phagocytic cells invade the area and begin to clean up the debris.

• Meanwhile the fibroblasts and osteoblasts invade from the nearby periosteum and endosteum and begin reconstructing of the bone.

• The chondroblasts secrete the cartilage matrix.

• The cartilage matrix later calcifies and forms the fibrocartilaginous callus.

• Gradually that is converted into a bony - (hard) callus of spongy bone.

• Bony callus formation continues until a firm union is formed about two months later to an year for complete woven bone formation.

• Will be continued for several months.

• After that the bony callus is remodelled.

• The excess material on the diaphysis exterior and within the medullary cavity is removed and the compact bone is laid down to reconstruct the shaft walls.

• The final structure of the remodelled area resembles like the unbroken bony region.

39. What is meant by physiotherapy?

• Physiotherapy is the therapeutic exercise to make the limbs work near normally.

• It is a rehabilitation profession with a presence in all health care centres.

• Therapeutic exercises are carried out by physiotherapists.

• The common problem at the end of fracture treatment is the wasting of muscles and stiffness of joints.

• These problems can be restored by the physiotherapy with gradual exercises.

• It has proven to be effective in the post surgery treatment and management of arthritis, spondylosis, musculo skeletal disorders, stroke and spinal cord injury.

Dislocation of joint is the total displacement of the articular end of the bone from the joint cavity. The normal alignment of the bones becomes altered. Joints of the jaw, shoulders, fingers and thumbs are most commonly dislocated. Dislocations of joints are classified as (i) Congenital deformities (ii) Traumatic (iii) Pathological (iv) Paralytic.

• Congenital deformities are due to genetic factors or factors operating on the developing foetus.

• Traumatic dislocation is due to serious violence. It occurs in the shoulder, elbow and hip.

• Pathological dislocation is caused by some diseases like tuberculosis. It may cause dislocation of the hip.

• Paralytic dislocation caused by paralysis of one group of muscles of an extremity.

• If the joint doesn't return to normal condition naturally the following treatments should be given.