1. Arrange the following structures in the order that a drop of water entering the nephron would encounter them.

2. Name the three filtration barriers that solutes must come across as they move from plasma to the lumen of Bowman’s capsule. What components of the blood are usually excluded by these layers?

4. Identify the following structures and explain their significance in renal physiology?

c. Sphincters in the bladder

a) Juxta glomerular apparatus : It is a specialized tissue in the afferent arteriole of the nephron that consists of macula densa and granular cells.

• Actions of Glanular cells : When there is a fall in glomerular blood flow it can activate Juxta glomerulus cells to release renin fromliver which converts a angiotensinogen to angiotensin I.

• It stimulates Na+ reabsorption in the proximal convoluted tubule by vaso constriction of the blood vessel and increases the glomerulae blood pressure.

• The visceral layer of Bowman's capsule is made of epithelial cells called podocytes.

• The podocytes and the foot processes and the basement membrane of glomerulus acts as a filtering membrane.

c) Sphincters in the bladder :

• The sphincters of the bladder regulates the urination.

• When the bladder is full the stretching of the urinary bladder stimulates the CNS through the sensory neurons of the para sympathetic nervous system and brings about contraction of the bladder.

• The sphincter opens and the urine is expelledout.

5. In which segment of the nephron most of the re-absorption of substances takes place?

• In the proximal convoluted tubule.

If a solute is filtered and not reabsorbed from the tubule, where does it go?

• The reabsorbed molecule of the lumen of the nephron goes to interstial fluid and then goes to blood.

• The filtered molecule when it is not reabsorbed by the tubules it will be excreted out through urine.

7. Which segment is the site of secretion and regulated reabsorption of ions and pH homeostasis?

• In the renal tubules H+ and NH4 are secreted and liberated into the tubules and excreted through urine thus maintaining acid base balance.

• For each H+ ions from the liberated filtrate one Na+ is reabsorbed in the tubules.

• Thus the H+ are maintained and their reabsorption is prevented.

8. What solute is normally present in the body to estimate GFR in humans?

9. Which part of the autonomic nervous system is involved in micturation process?

• The constriction of this does not affect the rate of filtration.

a) A liquid which gathers in the bladder - Urine

e) Removal of unwanted subtances from the body - Excretion

g) Carry urine from the kidneys to the bladder - Ureter

j) Consists of the kidneys ureters and bladder - Excretory system

l) What solute the blood contains that are not present in the glomerular filtrate? - Plasma Protein

24. With regards to toxicity and the need for dilution in water, how different are ureotelic and uricotelic excretions? Give examples of animals that use these types of excretion?

• The type of nitrogenous end product (Urea or Uric acid or ammonia) of an animal excretion depends upon the habitat of the animal.

• For Excretion of Ammonia more water is needed.

• Animals that excrete most of its nitrogen in the form of ammonia are called ammonoteles.

• Fishes Amphibians. Uric acid can be eliminated with a minimum loss of water and are called Uricoteles.

i. Proto - first it is a network of dead end tubules lacking internal opening.

i. Meta - after They have tubular internal opening called nephrostome.

ii. The excretory products are filters and selectively reabsorped.

iv. Excretory structure are osmo regulators and helps in excretion.

26. What is the nitrogenous waste produced by amphibian larvae and by the adult animal?

27. How is urea formed in the human body?

• Blood enters the kidney from the renal artery into the glomerulus.

• The filteration is started in glomerulus. The fluid that leaves the glomerular capillaries and enters the Bowman's capsule is called the glomerular filtrate. It formed 170-180 litre within 24 hours.

• Molecules larger than 5mm are barred from entering the tubule.

• The two opposing forces are contributed by the plasma proteins in the capillaries.

• The net filteration pressure of 10mm Hg is responsible for the renal filteration. 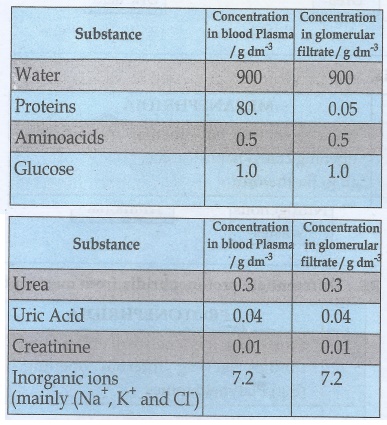 • Urine released is around 1.5 l per day. 99% of the glomerular filtrate is reabsorped by the renal tubules.

• Glucose lactate amino acids Na+ in the filtrate is reabsorped in the PCT.

• Sodium is reabsorped by active transport through sodium potassium pump in the PCT.

• Small amounts of urea and uric acid are reabsorped. 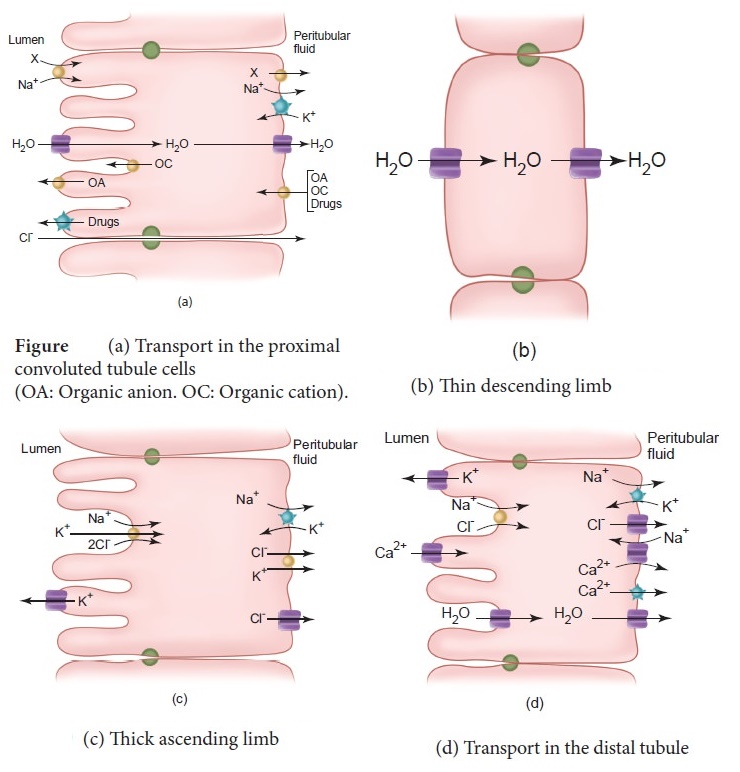 • Descending limb of Henle's loop is permeable to water due to the presence of aqua porins but not permeable to salts.

• Water is lost in the descending limb. Hence Na+ and Cl− gets concentrated in the filtrate.

• Ascending limb of Henle's loop is impermeable to water but permeable to Na+,Cl− and K+.

• It recovers water and secretes potassium into tubule.

• Reabsorption of HCO3 takes place to regulate the blood pH.

• Collecting tubule is permeable to water potassium ions are actively transported into the tubule and Na+ to produce concentrated urine.

• Once it enters the collecting duct water is absorped and concentrated hypertonic urine is formed.

• Since H+ gets fixed in the fluid reabsorption of H+ is prevented.

1. The loop of Henle is too short and extends only very little into the medulla.

1. Nephrons have long loop of Henle that run deep in to the medulla.

29. What vessels carry blood to the kidneys? Is this blood arterial or venous?

• Renal artery right and left artery. The blood is arterial.

30. Which vessels drain filtered blood from the kidneys?

• Renal vein. The filtered blood is taken from the kidney to inferior vena cava through renal vein.

31. What is tubular secretion? Name the substances secreted through the renal tubules

• In the distal convoluted tubule the urine becomes hypotonic.

• It contains urea and salts pass from peri tubular blood in to the cells of DCT.

• For every H+ secreted a Na+ is absorbed by the tubular cell.

• Since H+ gets fixed in the fluid reabsorption of H+ is prevented.

32. How are the kidneys involved in controlling blood volume? How is the volume of blood in the body related to arterial pressure?

• When the volume of blood decreases the flow pressure, decreases.

• This can be sensed by hypothalamus and osmo receptors are stimulated and anti diuretic hormone is secreted from the neuro hypophysis.

• The aquaporins in the proximal convoluted tubules and collecting tubule reabsorb water. Hence the blood volume increases and the blood pressure increases.

33. Name the three main hormones are involved in the regulation of the renal function?

34. What is the function of antidiuretic hormone? Where is it produced and what stimuli increases or decreases its secretion?

• ADH which is also called as vasopressin or Anti diuretic hormone is secreted from neuro hypophysis.

• When the fluid level and pressure is maintained due to the negative feed back mechanism ADH secretion stops.

35. What is the effect of aldosterone on kidneys and where is it produced?

• Due to the stimulation of Angiotensin II the adrenal cortex secretes aldosterone. That causes reabsorption of Na+, K+ excretion and absorption of water from distal convoluted tubule and collecting tubule.

• This mechanism is known as Renin - Angio tensin Aldosterone system.

36. Explain the heart's role in secreting a hormone that regulates renal function? What hormone is this?

• Excessive stretch of cardiac atrial cells cause an increase in blood flow to the atria of the heart and release Atrial Natriuretic Peptide or factor (ANF) travels to the kidney where H increases Na+ excretion and increases the blood flow to the glomerulus,