Organ and Organ Systems in Animals

14. What characteristics are used to identify the earthworms?

15. What are earthworm casts?

The undigested particles along with soil are passed out through the anus as worm castings or vermicasts.

16. How do earthworms breathe?

There is no lungs and gills.

They respire through body surface.

17. Why do you call cockroach a pest?

The cockroaches act as vector for the transmission of diseases like Cholera, Dysentery Tuberculosis and Typhoid. Hence it is considered as a pest.

The triangular muscles that are present on both side of heart is responsible for blood circulation.

19. Name the visual units of the compound eyes of cockroach.

• The photo receptors of the cockroach consists of a pair of compound eye on the dorsal surface of the head.

• Each eye is formed of about 2000 simple eyes called the ommatidia.

20. How does the male frog attracts the female for mating?

• The male frog has a pair of vocal sacs and copulatory or nuptial pad on the ventral side of the first digit of each forelimb.

21. Write the types of respiration seen in frog.

• Frog respires both on land and in water. In the water it respires through skin and moist body surface.

• When on land respires through buccal cavity skin and lungs.

22. Differentiate between peristomium and prostomium in earthworm.

24. Differentiate between tergum and a sternum.

The sclerites of dorsal side of cockroach

The sclerites of ventral side of cockroach

25. Head of cockroach is called hypognathous. Why?

• The head of cockroach is small triangular one.

• It lies right angle to the longitudinal body axis.

• The mouth parts are directed downwards so it is hypognathous.

26. What are the components of blood in frog?

27. Draw a neat labeled diagram of the digestives system of frog. 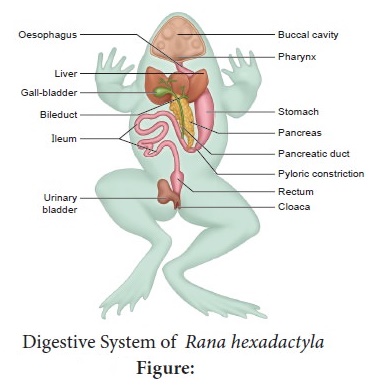 • There are pair of testes. Each test is attached with kidney and dorsal body wall with the peritoneal membrane mesorchium.

• The vasa efferentia arises from each test is opened, into the bladder canal and it communicates with the urinogenital duct that comes out of kidneys and opens into the cloaca. 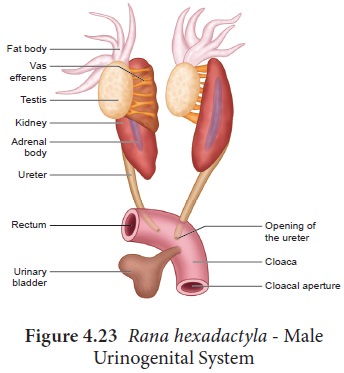 • It consists of paired ovaries attached to the kidney and dorsal body wall by folds of peritoneum called mesovarium.

• Each oviduct opens into the body cavity at the anterior end by a funnel like opening called ostia and posteriority the oviducts dilated to form ovisac before they open into cloaca.

• The eggs hatch into tadpoles.

• The tadpole grows into an air-breathing carnivorous adult frog through a process meta morphosis. 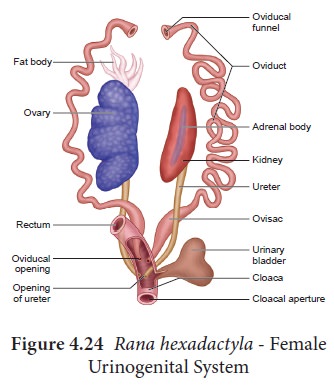 30. Differentiate between Male and Female cockroach?

Q. Comment on the role of air sacs in increasing the respiratory efficiency in birds.