A. Answer the following questions in one or two sentences.

1. Why could not Nehru send any presents to Indira?

As Nehru was in the prison, he could not send any presents to Indira.

2. What cannot be stopped even by the high walls of prisons?

Nehru's letters cannot be stopped even by the high walls of prisons.

3. Why did Nehru dislike sermonizing?

Nehru disliked sermonizing because he thought that only talking and discussing is the best way to find what is right or wrong.

4. What does history tell us?

History tells us that whole people become interested in a great cause.

5. What do ordinary men and women usually think of?

Ordinary men and women usually think of their bread and butter, of their children, and their house hold worries and the like.

6. When do ordinary men and women become heroes?

Ordinary men and women become heroes when the history helps them.

7. What does the phrase ‘great drama’ refer to?

The phrase 'great drama' refers to the activities of the people of India in the great freedom struggle under Bapuji's leadership.

8. Why are the freedom fighters under Gandhi not afraid of anything?

The freedom fighters under Gandhi do every thing with no room for secrecy or hiding. So they are not afraid of anything.

Jawaharlal Nehru was in Naini prison. He was unable to send a birthday present to his young daughter Indira, so he sent a birthday letter to her. He reminded her of Joan of Arc which he had read earlier. Nehru emphasised the significance of history that could make the men and women heroic in their lives. In his view history helps even simple, ordinary people to become heroes. He told her about the great leaders who make them do great deeds. He also tells the magic of Bapuji's message that had stolen the hearts of millions of Indians. Nehru insisted her on being courageous. He induces the spirit to respect India's honour which is a secret trust. He cites Bapuji's leadership that has no secrecy or hiding. So also his daughter should make friends in the light and do nothing secretly. Nehru is quite confident that Indira will grow up into a brave soldier in India's service.

“Be brave and all the rest follows”.

2. Imagine yourself as Indira and write a reply letter to your father, Nehru for the letter you received on your birthday.

My joy has no bounds to receive your letter. I feel as if you are sitting besides me and talking to you.

It is overwhelming to know how Bapuji's magic message has stolen the hearts of India's millions.

Your words are so powerful and I shall respect India's honour which is a secret trust. Like Bapuji, I shall be truthful and have no room for secrecy or hiding.

With your hearty wish I'll grow up unafraid serene and unruffled. I'll be a brave soldier in India's service fulfilling your dreams.

With much love and deep regards.

• A birthday without gift

• Belts to practice than to preach

• Letter - a one sided affair

• The ordinary rise to the occasion

Jawaharlal Nehru is the first Prime Minister of India. He is a man of ietters. He is well known in the Indian and world history. His daughter Indira Gandhi missed her father's love. So, he wrote letters to his daughter from prison.

A birthday without gift:

Indira used to receive gifts on her birthday. Nehru was in prison. He could not send her gifts. The present he sent was the mind and spirit.

Belts to practice than to preach:

Nehru hates preaching. He doesn't like advising. He supports discussion.

Letter - a one sided affair:

A discussion needs atleast 2 people. A letter is a one sided affair. Nehru wants his daughter to think they are having a talk.

The ordinary rise to the occasion:

Ordinary men and women are not heroic. They think of their family worries. When they are interested in great cause, they become heroes. Great leaders inspire them.

Gandhiji - Father of our nation has inspired many people. Bapuji had inspired our people to participate in the freedom struggle.

It is not easy to select what is right and wrong. Nehru said her not to do anything secretly. Fear is a bad thing. Nehru advised her to be brave.

Nehru concludes his letter saying many things. Nehru wished his daughter to grow up into a brave soldier in service of India.

“Be brave and serve nation’

When Jawaharlal Nehru was in Naini prison. He wrote a birthday letter to Indira. He reminds of the historical character Joan of Arc. He emphasises the significance of historical events. History even helps common people to become heroes. Great leaders inspire the ordinary people to do noble deeds. He admires Bapuji whose magic message has stolen the hearts of India's millions working with no secrecy or hiding. Nehru wishes Indira to do anything not secretly. If she does so she will grow up unafraid serene and unruffled, whatever may happen. Finally he blesses her that she may grow into a brave soldier in India's service.

• Nehru writes a letter to his daughter Indira from Naini prison.

• Nehru said that his messages in the letter were his presents.

• The letter was the gift of the mind and the spirit.

• He liked discussing with his daughter than sermonizing.

• When people became interested in a great cause, history helps the ordinary men and women to become heroes.

• He mentioned Bapuji efforts in the freedom struggle.

• He advised Indira not to do anything in secret.

• Nehru wished his daughter to grow up into a brave soldier in the service of India.

C. Match the words with correct Synonym and Antonym from the table. 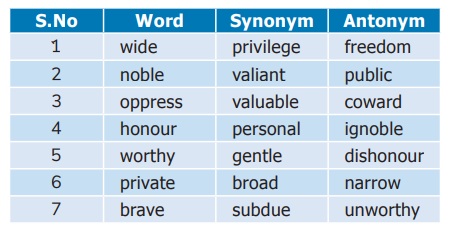 What is the difference between an opinion and a fact?

* An opinion is one’s feelings or thoughts about somebody/something.

* A fact is a piece of information that can be proved to be true.

D. Identify, whether the following statements are of OPINION or FACT

1. On your birthday you have been in the habit of receiving presents and good wishes. (Opinion/Fact) Answer : Fact

2.  I have liked my talks with you. (Opinion/Fact) Answer : Opinion

3.  The best way to find what is wrong and right is by discussing. (Opinion/Fact) Answer : Opinion

4.  A letter can hardly take the place of a talk. (Opinion/Fact) Answer : Opinion

5.  For the desire to hide anything means that you are afraid. (Opinion/Fact) Answer : Fact