• It is the process of moving a block from one place to another.

• It is the process of making duplicate copies of the block of a worksheet.

2. What is the use of a file extension?

Answer: File extension is used to know that in which the file is associated with.

• File is the collection of records.

• Folder is a collections of files.

4. Differentiate Save and save As option.

Answer: Open Source refers to a program or software in which the source code is available in the web to the general public free of cost.

6. What are the advantages of open source?

Answer: (i) The Open source software is free to use, distribute, and modify.

(ii) It has lower cost in most cases in only the fraction of the cost of their proprietary counter parts.

(iii) It is most secured as the code is accessible to everyone.

The server distributions in Linux OS

Answer: When you have finished working on your computer, you can choose to Logout, suspend or Shut down through the session Indicator on the far right side of the top pannel.

1. Analyse: Why the drives are segregated?

Answer: The drives are segregated because

(i) Save space and increase performance.

(ii) To include other Operating systems, isolate programs and keep files tidy.

(iii) It might help to isolate operating systems or programs from other user.

2. If you are working on multiple files at a time, sometimes the system may hang. What is the reason behind it. How can you reduce it?

Answer: (i) Due to low capacity of main memory (RAM) the system many hang while working with multiple files.

(ii) To reduce it increase the size of main memory and other reasons for hanging is over heating, driver corruption or errors, software errors and computer virus.

3. Are drives such as hard drive and floppy drives represented with drive letters? If so why, if not why?

4. Write the specific use of Cortana.

Answer: Use of Cortana :

(i) Gives reminders based on time, places or people.

(v) Open any application on your system.

5. List out the major differences between Windows and Ubuntu OS. 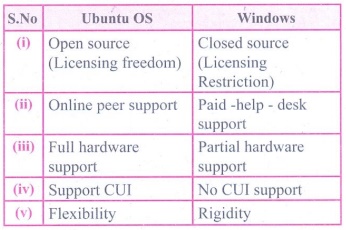 6. Are there any difficulties you face while using Ubuntu? If so, mention it with reasons.

Answer: (i) Different desktop managers lead to a fragmented experience.

(ii) Too many package managers makes Ubuntu hard to learn and master.

Answer: Firefox is a browser. Thunderbird is email client which can be used view emails received.

8. Differentiate Save, Save As and Save a Copy in Ubuntu OS.

Save - This will save the document without asking for a new name or location. It will overwrite the original.

Save As - This will prompt you to save the document using a dialog box. This allows to change the file name or location.

i. Introduction of GUI in 16 - bit. processor

ii. Mouse was introduced as an input device.

i. Supports to minimize or maximize windows.

i. Introduced the concept of multitasking.

ii. Supported 256 colours which brought a more modern, colourful look to the interface.

i. Integration of the Web browser (Internet Explorer) with the Operating System.

Designed to act as servers in network.

i. Served as an Operating System for business desktop and laptop systems.

ii. Four versions of Windows 2000 were released: Professional (for business desktop and laptop systems), Server (both a Web server and an office server), Advanced Server (for line-of-business applications) and Data Centre Server (for high-traffic computer networks).

Updated the look and feel of Windows.

i. Windows 8 is faster than previous versions of Windows.

iv. Served as common platform for mobile and computer.

i. Start Button was added again. 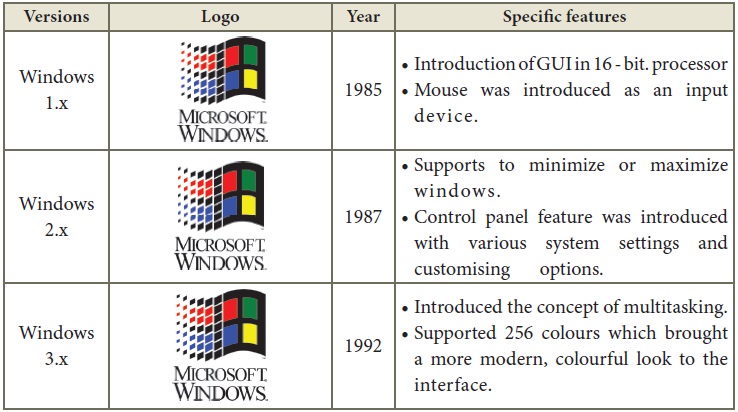 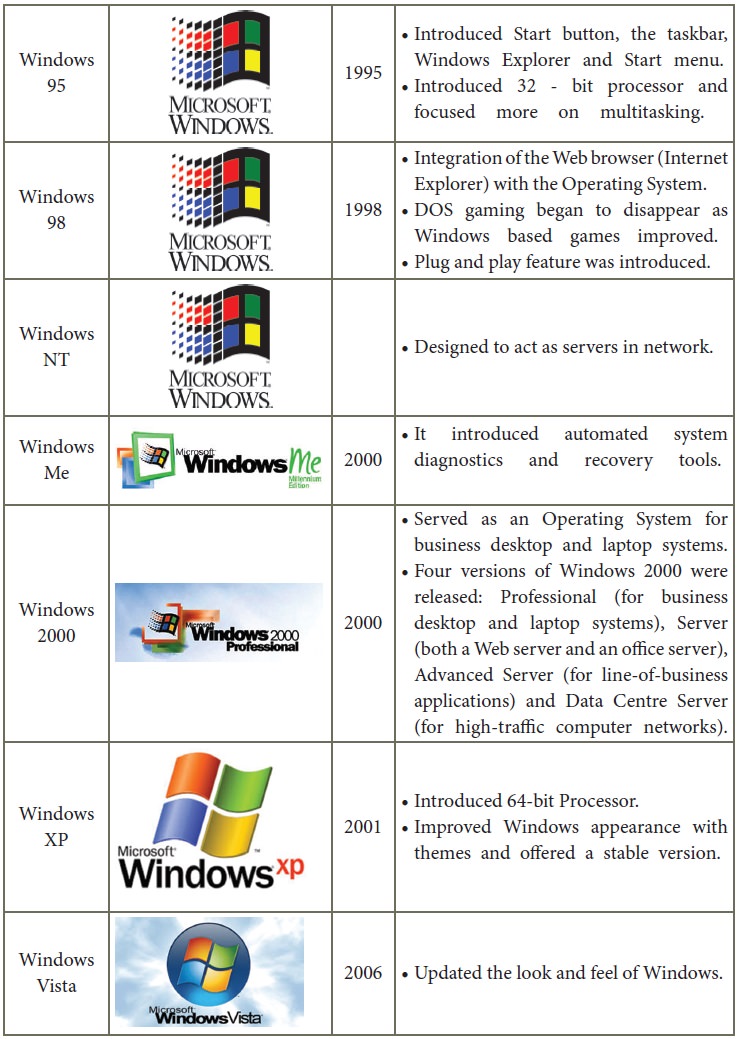 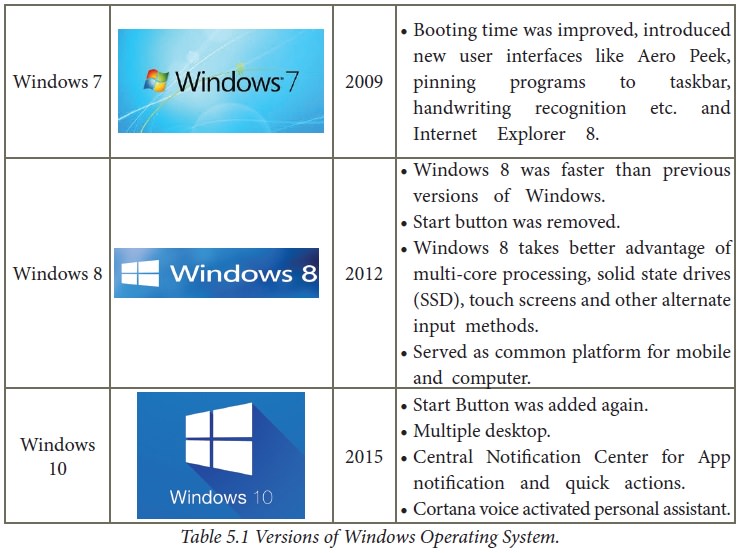 2. Draw and compare the icon equivalence in Windows and Ubuntu. 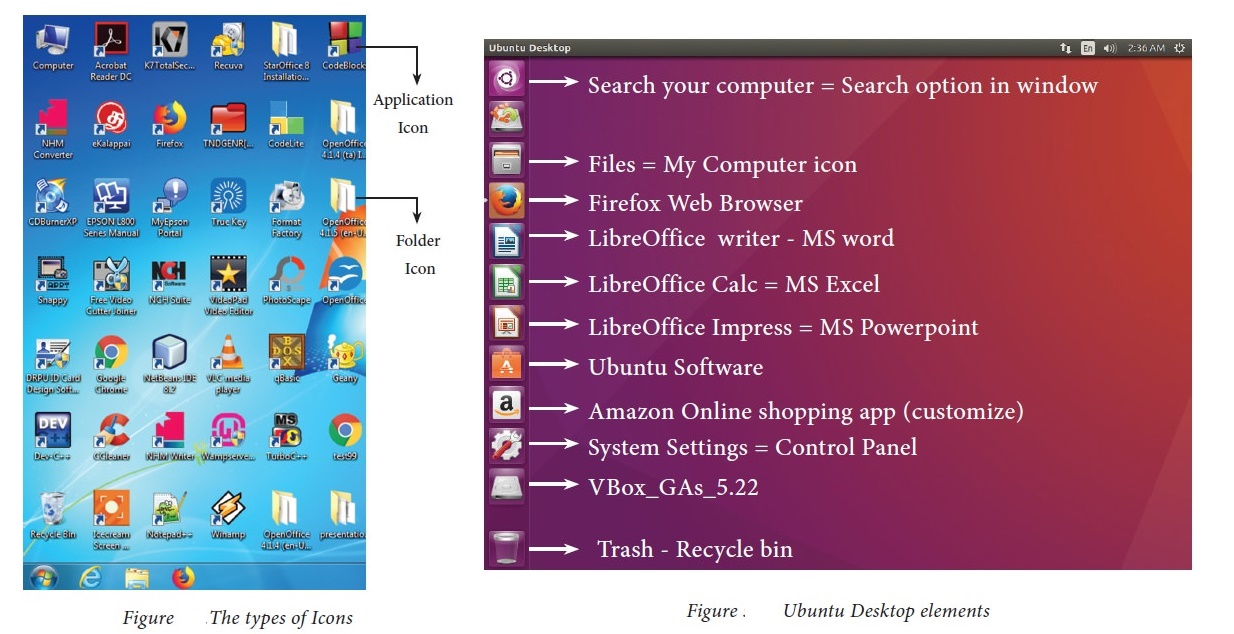 4. Observe the figure and mark all the window elements. Identify the version of the Windows OS. 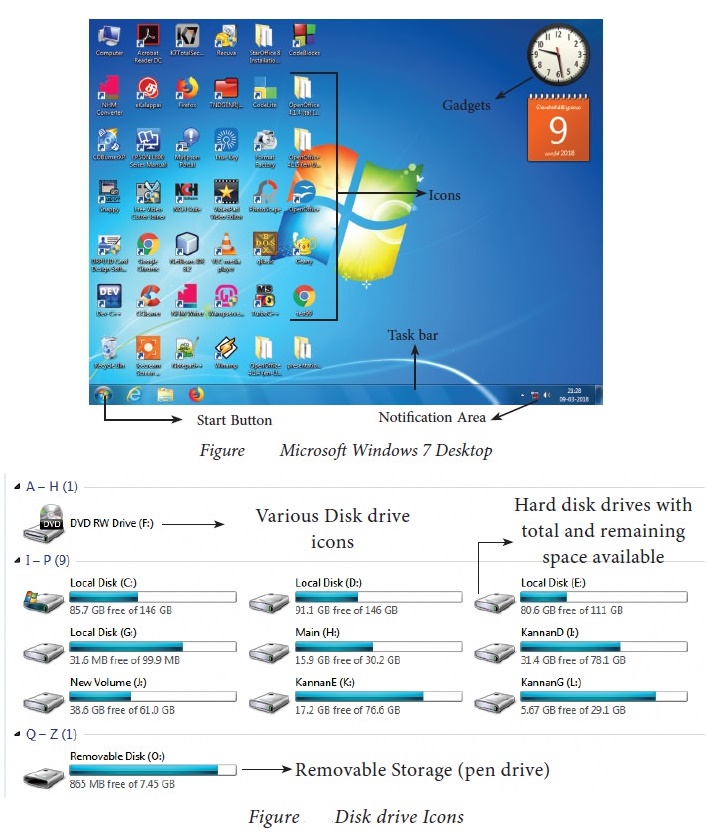 5. Write the procedure to create, rename, delete and save a file in Ubuntu OS. Compare it with Windows OS.

(i) Create a file : By right clicking in the desktop and also files be created by using file menu.

(ii) Delete a file : By using right click and choosing move to trash or by using menu.

(i) Create file : Open an application and created by using file menu.

(ii) Delete a file : By right click on a file and choose delete option to delete a file.

(iii) Rename a file : By right click on a file and choose rename option to rename a file.