1. What are the parameters which influence the characteristics of a microprocessor?

A Microprocessor’s performance depends on the following characteristics:

2. What is an instruction?

Answer: A command which is given to a computer to perform an operation on data is called an instruction.

3. What is a program counter?

Answer: The Program Counter (PC) is a special register in the CPU which always keeps the address of the next instruction to be executed.

Answer: High-Definition Multimedia Interface is an audio/video interface which transfers the uncompressed video and audio data from a video controller, to a compatible computer monitor, LCD projector, digital television etc.

5. Which source is used to erase the content of a EPROM?

Answer: Ultra-violet-rays is used to erase the content of a EPROM.

(i) Computer Organization deals with the hardware components that are transparent to the programmer.

(ii) Computer architecture deals with the engineering considerations involved in designing a computer.

2. Classify the microprocessor based on the size of the data.

3. Write down the classifications of microprocessors based on the instruction set.

Answer: The two types of microprocessors wich are based on their instruction sets. 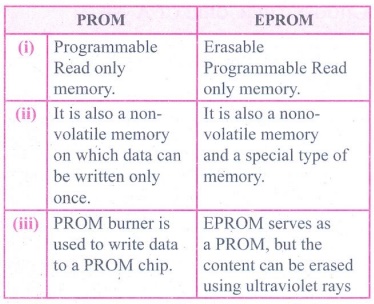 (i) Programmable Read only memory.

(ii) It is also a non-volatile memory on which data can be written only once.

(iii) PROM burner is used to write data to a PROM chip.

(i) Erasable Programmable Read only memory.

(ii) It is also a nono-volatile memory and a special type of memory.

(iii) EPROM serves as a PROM, but the content can be erased using ultraviolet rays

5. Write down the interfaces and ports available in a computer. 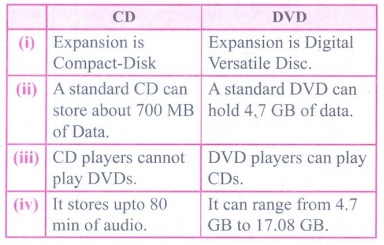 (i) Expansion is Digital Versatile Disc.

7. How will you differentiate a flash memory and an EEPROM?

(i) Flash memory is an electronic (solid-state) non-volatile computer storage medium that can be electrically erased and reprogrammed.

(ii) Electrically Erasable Programmable Read Only Memory can be erased by exposing it to an electrical charge.

(iii) EEPROM is slower in performance.

1. Explain the characteristics of a microprocessor.

Answer: A Microprocessor’s performance depends on the following characteristics:

2. How the read and write operations are performed by a processor? Explain.

Answer: (i) The Central Processing Unit(CPU) has a Memory Data Register (MDR) and a Memory Address Register (MAR).

(ii) The Memory Data Register (MDR) keeps the data which is transferred between the Memory and the CPU. The Program Counter (PC) is a special register in the CPU which always keeps the address of the next instruction to be executed.

(iii) A bus is a collection of wires used for communication between the internal components of a computer.

(vi) Also, the write operation transfers data from the MDR to memory. 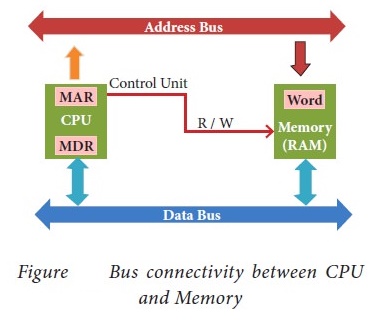 (vii) The word in the RAM has the same size (no. of bits) as the Memory Data Register (MDR).

(viii)The data bus has eight parallel wires to transfer data either from MDR to word or word to MDR based on the control (Read or write). 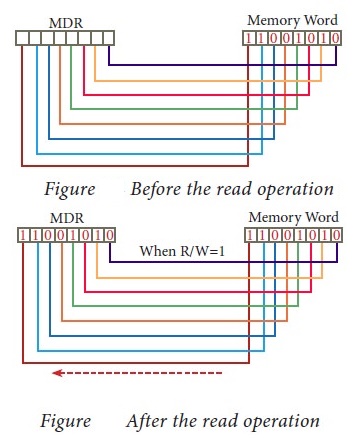 3. Arrange the memory devices in ascending order based on the access time. 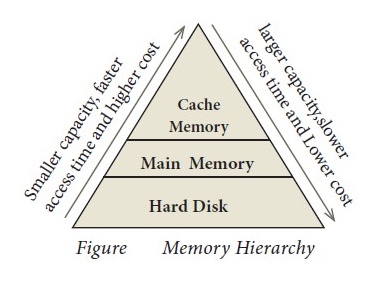 They are sequential access and random access. In sequential access, the memory is accessed in an orderly manner from starting to end. But, in random access, any byte of memory can be accessed directly without navigating through previous bytes. Different memory devices are arranged according to the capacity, speed and cost as shown in Figure.

4. Explain the types of ROM.

(i) Read only memory refers to special memory in a computer with pre-recorded data at manufacturing time which cannot be modified.

The stored programs that start the computer and perform diagnostics are available in ROMs.

(ii) ROM stores critical programs such as the program that boots the computer. Once the data has been written onto a ROM chip, it cannot be modified or removed and can only be read.

(iii) ROM retains its contents even when the computer is turned off. So, ROM is called as a non-volatile memory.

(i) Programmable read-only memory is also a non-volatile memory on which data can be written only once. Once a program has been written onto a PROM, it remains there forever.

(ii) Unlike the main memory, PROMs retain their contents even when the computer is turned off.

(iii) PROM is manufactured as a blank memory, whereas a ROM is programmed during the manufacturing process itself. PROM programmer or a PROM burner is used to write data to a PROM chip. The process of programming a PROM is called burning the PROM.

(i) Erasable Programmable Read-Only Memory is a special type of memory which serves as a PROM. The content can be erased using ultraviolet rays.

(ii) An EPROM differs from a PROM. PROM can be written only once and cannot be erased.

(iii) EPROMs are used widely in personal computers because they enable the manufacturer to change the contents of the PROM to replace with updated versions or erase the contents before the computer is delivered. 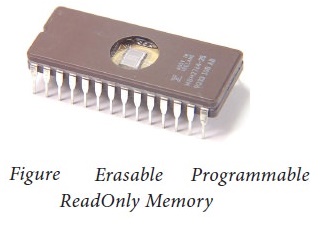 (i) Electrically Erasable Programmable Read-Only Memory can be erased by exposing it to an electrical charge.