Answer: (i) A computer is an electronic device that manipulates information, or data. It has the ability to store, retrieve, and process data.

2. Distinguish between data and information. 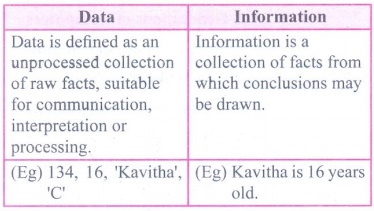 • Data is defined as an unprocessed collection of raw facts, suitable for communication, interpretation or processing.

• Information is a collection of facts from which conclusions may be drawn.

3. What are the components of a CPU?

Answer: The CPU has three components which are Control unit, Arithmetic and logic unit (ALU) and Memory unit.

4. What is the function of an ALU?

(ii) The result of an operation is stored in internal memory of CPU.

(iii) The logical operations of ALU promote the decision making ability of a computer.

5. Write the functions of control unit.

Answer: The control unit controls the flow of data between the CPU, memory and I/O devices. It also controls the entire operation of a computer.

6. What is the function of memory? 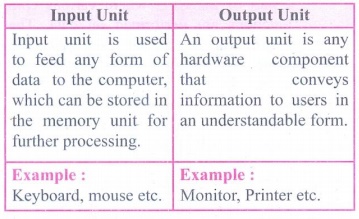 • Input unit is used to feed any form of data to the computer, which can be stored in the memory unit for further processing.

• An output unit is any hardware component that conveys information to users in an understandable form. 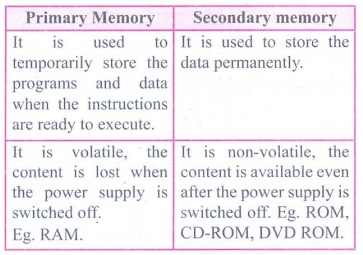 • It is used to temporarily store the programs and data when the instructions are ready to execute. .

• It is volatile, the content is lost when the power supply is switched off. Eg. RAM.

• It is used to store the data permanently.

• It is non-volatile, the content is available even after the power supply is switched off. Eg. ROM, CD-ROM, DVD ROM.

1. What are the characteristics of a computer?

1. What are the characteristics of a computer?

Answer: (i) Computer is the powerful machine.

(ii) It can perform large number of tasks.

2. Write the applications of computer.

Answer: The various applications of computers are,

3. What is an input device? Give two examples.

Answer: Input device is used to feed any form of data to the computer, which can be stored in the memory unit for further processing. 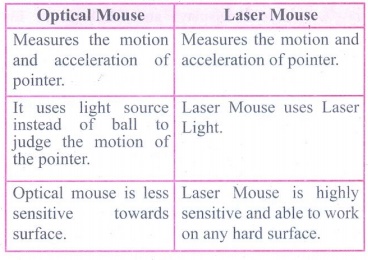 • Measures the motion and acceleration of pointer.

• It uses light source instead of ball to judge the motion of the pointer.

• Measures the motion and acceleration of pointer.

• Laser Mouse is highly sensitive and able to work on any hard surface.

(ii) A Dot matrix printer that prints using a fixed number of pins or wires.

7. Write the characteristics of sixth generation.

Answer: (i) In the Sixth Generation, computers could be defined as the era of intelligent computers based on Artificial Neural Networks.

(ii) One of the most dramatic changes in the sixth generation will be the explosive growth of Wide Area Networking.

(iv) It provides the ability to develop the computer program to understand human language.

8. Write the significant features of monitor.

(i) Monitor is the most commonly used output device to display the information. It looks like a TV.

(ii) Pictures on a monitor are formed with picture elements called PIXELS.

(iii) Monitors may either be Monochrome which display text or images in Black and White or can be color, which display results in multiple colors.

(iv) There are many types of monitors available such as CRT (Cathode Ray Tube), LCD (Liquid Crystal Display) and LED (Light Emitting Diodes).

(v) The video graphics card helps the keyboard to communicate with the screen.

(vi) It acts as an interface between the computer and display monitor.

1. Explain the basic components of a computer with a neat diagram.

Components of a Computer : 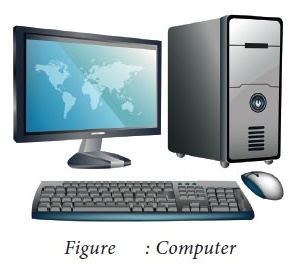 (i) Input unit: Input unit is used to feed any form of data to the computer, which can be stored in the memory unit for further processing.

(ii) Central Processing Unit : CPU is the major component which interprets and executes software instructions. It also control the operation of all other components such as memory, input and output units.

(iii) Arithmetic and Logic Unit : The ALU is a part of the CPU where various computing functions are performed on data. The ALU performs arithmetic operations such as addition, subtraction, multiplication, division and logical operations. 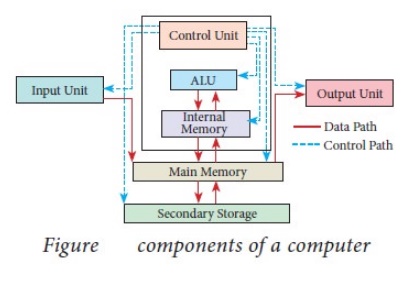 (iv) Control Unit : The control unit controls the flow of data between the CPU, memory and I/O devices. It also controls the entire operation of a computer.

(v) Output Unit : An output unit is any hardware component that conveys information to users in an understandable form. Example : Monitor, Printer etc.

2. Discuss the various generations of computers. 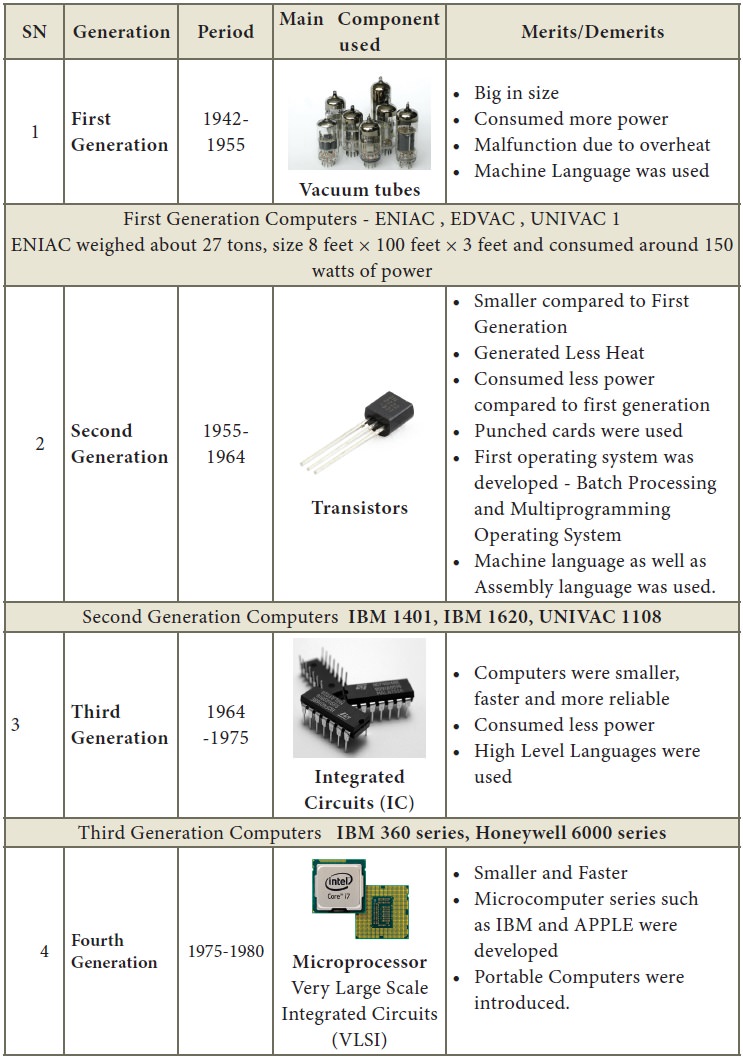 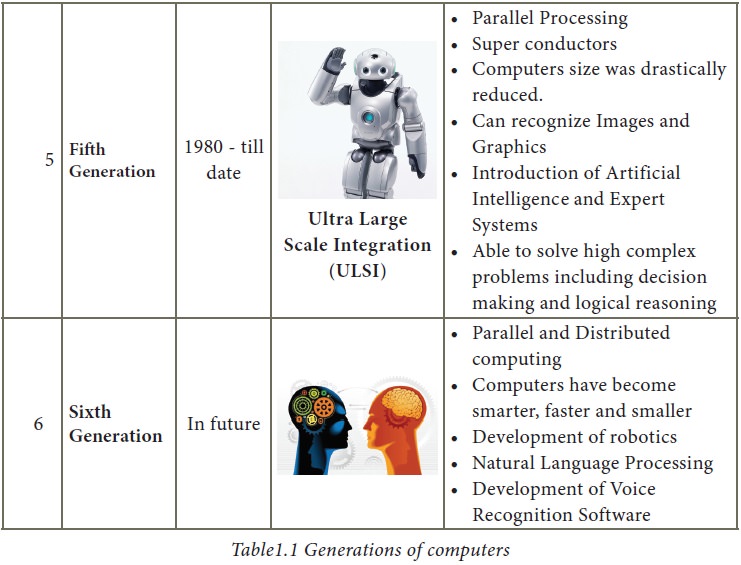 (i) Inkjet Printers use colour cartridges which combined Magenta, Yellow and Cyan inks to create color tones. A black cartridge is also used for monochrome output. Inkjet printers work by spraying ionised ink at a sheet of paper.

(ii) They use the technology of firing ink by heating it so that it explodes towards the paper in bubbles or by using piezoelectricity in which tiny electric currents controlled by electronic circuits are used inside the printer to spread ink in jet speed.

(iii) An Inkjet printer can spread millions of dots of ink at the paper every single second. 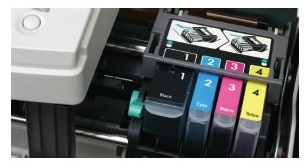 (i) Multimedia projectors are used to produce computer output on a big screen.

(ii) These are used to display presentations in meeting halls or in classrooms. 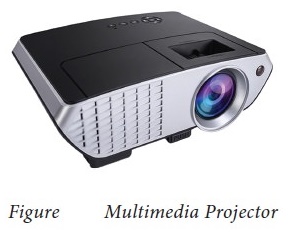 (i) A Bar code is a pattern printed in lines of different thickness. The Bar code reader scans the information on the bar codes transmits to the Computer for further processing.

(ii) The system gives fast and error free entry of information into the computer.

The QR code is the two dimension bar code which can be read by a camera and processed to interpret the image. 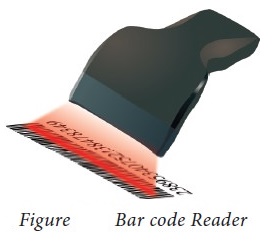