Answer: The ozone shield is being damaged by chemicals released on the Earth’s surface notably the chlorofluorocarbons widely used in refrigeration, aerosols, chemicals used as cleaners in many industries. The decline in the thickness of the ozone layer over restricted area is called Ozone hole.

17. Give four examples of plants cultivated in commercial agroforestry.

Answer: The major species cultivated in commercial Agroforestry include Casuarina, Eucalyptus, Malai Vembu, Teak and Kadambu trees which were among the 20 species identified as commercial timber. They are of great importance to wood-based industries.

Answer: (vii) An agro-chemical is useful in managing agriculture or in farming area which is one of the major issues of the environment.

20. How do forests help in maintaining the climate?

Answer: (i) Forest act as carbon sink. Any system having the capacity to accumulate more atmospheric carbon during a given time interval than releasing CO2 is called a carbon sink. Thus forests are ideal carbon sink since the trees utilize CO2 for photosynthesis.

(iv) If the atmospheric CO2  level increases it will lead to global warming. There will be a drastic change in weather patterns bringing more floods or droughts in some areas. This can also cause frequent heat waves.

21. How do sacred groves help in the conservation of biodiversity?

Answer: (i) These are the patches or grove of cultivated trees which are community protected and are based on strong religious belief systems which usually have a significant religious connotation for protecting community.

(iii) These groves provide a number of ecosystem services to the neighbourhood like protecting watershed, fodder, medicinal plants and micro climate control.

22. Which one gas is most abundant out of the four commonest greenhouse gases? Discuss the effect of this gas on the growth of plants?

Answer: CO2  (Carbon dioxide) is the most abundant among green house gases.

(i) Low agricultural productivity in tropics.

(iii) Increase of vectors and epidemics. 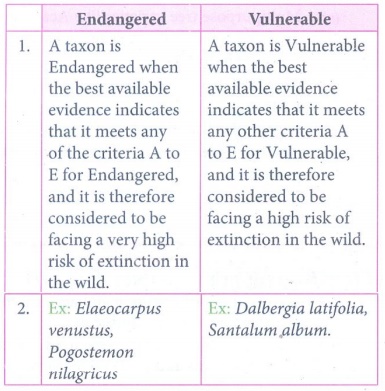 1. A taxon is Endangered when the best available evidence indicates that it meets any of the criteria A to E for Endangered, and it is therefore considered to be facing a very high risk of extinction in the wild.

1. A taxon is Vulnerable when the best available evidence indicates that it meets any other criteria A to E for Vulnerable, and it is therefore considered to be facing a high risk of extinction in the wild.

24. Suggest a solution to water crisis and explain its advantages.

Rainwater harvesting is the accumulation and storage of rain water for reuse in-site rather than allowing it to run off. Rainwater can be collected from rivers, roof tops and the water collected is directed to a deep pit. The water percolates and gets stored in the pit. RWH is a sustainable water management practice implemented not only in urban area but also in agricultural fields, which is an important economical cost effective method for the future. 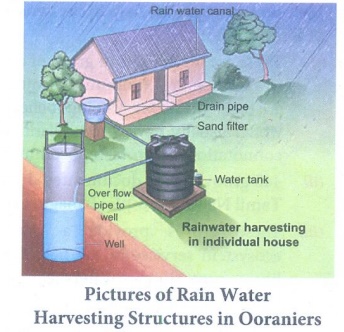 (i) Promotes adequacy of underground water and water conservation.

(ii) Mitigates the effect of drought.

(vi) No land is wasted for storage purpose and no population displacement is involved.

(vii) Storing water underground is an eco-friendly measure and a part of sustainable water storage strategy for local communities.

Answer:  Afforestation is planting of trees where there was no previous tree coverage and the conversion of non-forested lands into forests by planting suitable trees to retrieve the vegetation. Example: Slopes of dams afforested to reduce water run-off, erosion and siltation. It can also provide a range of environmental services including carbon sequestration, water retention.

(i) With an aim of ecological restoration and biological up-gradation of degraded forests and other lands, the government of Tamil Nadu launched the project in 2 phases.

(ii) Tap I (1997-2005) it aimed to uplift the quality and life of villagers abutting forest areas and to resolve the degraded forests in Tamil Nadu. This is a massive joint Forest Management Programme.

(iii) TAP II (2005-2013) had 2 main objectives. To restore the ecological equilibrium of the forests, watersheds and adjacent villages of Tamil Nadu.

(iv) To improve the quality of the life of inhabitants through reforestation, water conservation and sustained community action.

26. What are the effects of deforestation and benefits of agroforesty?

(i) Burning of forest wood release stored carbon, a negative impact just opposite of carbon sequestration.

(ii) Trees and plants bind the soil particles. The removal of forest cover increases soil erosion and decreases soil fertility. Deforestation in dry areas leads to the formation of deserts.

(iv) The alteration of local precipitation patterns leading to drought conditions in many regions. It triggers adverse climatic conditions and alters water cycle in ecosystem.

(v) It decreases the bio-diversity significantly as their habitats are disturbed and disruption of natural cycles.

(vi) Loss of livelihood for forest dwellers and rural people.

(i) It is a solution for the problem of soil and water conservation and also to stabilise the soil (salinity and water table) reduce landslide and water run-off problem.

(iv) Suitable for dry land where rainfall is minimum and hence it is a good system for alternate land use pattern.

(vi) Agro-forestry is recommended for the following purposes. It can be used as Farm Forestry for the extension of forests, mixed forestry, shelter belts and linear strip plantation.