1. Write about the merits of unitary form of government.

• There is no conflict of authority and responsibility.

• A unitary government is less expensive.

• Amendments to the constitution are easy.

• There is unity uniformity of law policy and administration

• Here the executive is not responsible to the legislature for its policies acts.

• The executive is independent of the judiciary.

• It is basically built on the principle of separation of powers

• It is prevalent in USA, Brazil, Russia and Sri Lanka.

3. Differences between Presidential and Parliamentary form of government. 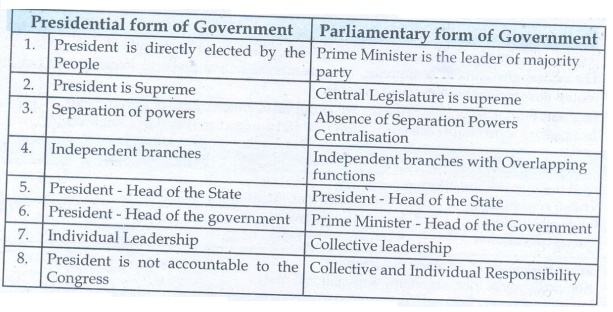 1. President is directly elected by the People

5. President - Head of the State

6. President - Head of the government

8. President is not accountable to the Congress

1. Prime Minister is the leader of majority party

5. President - Head of the State

6. Prime Minister - Head of the Government